eARC Review: Nine One One by Scarlet Blackwell 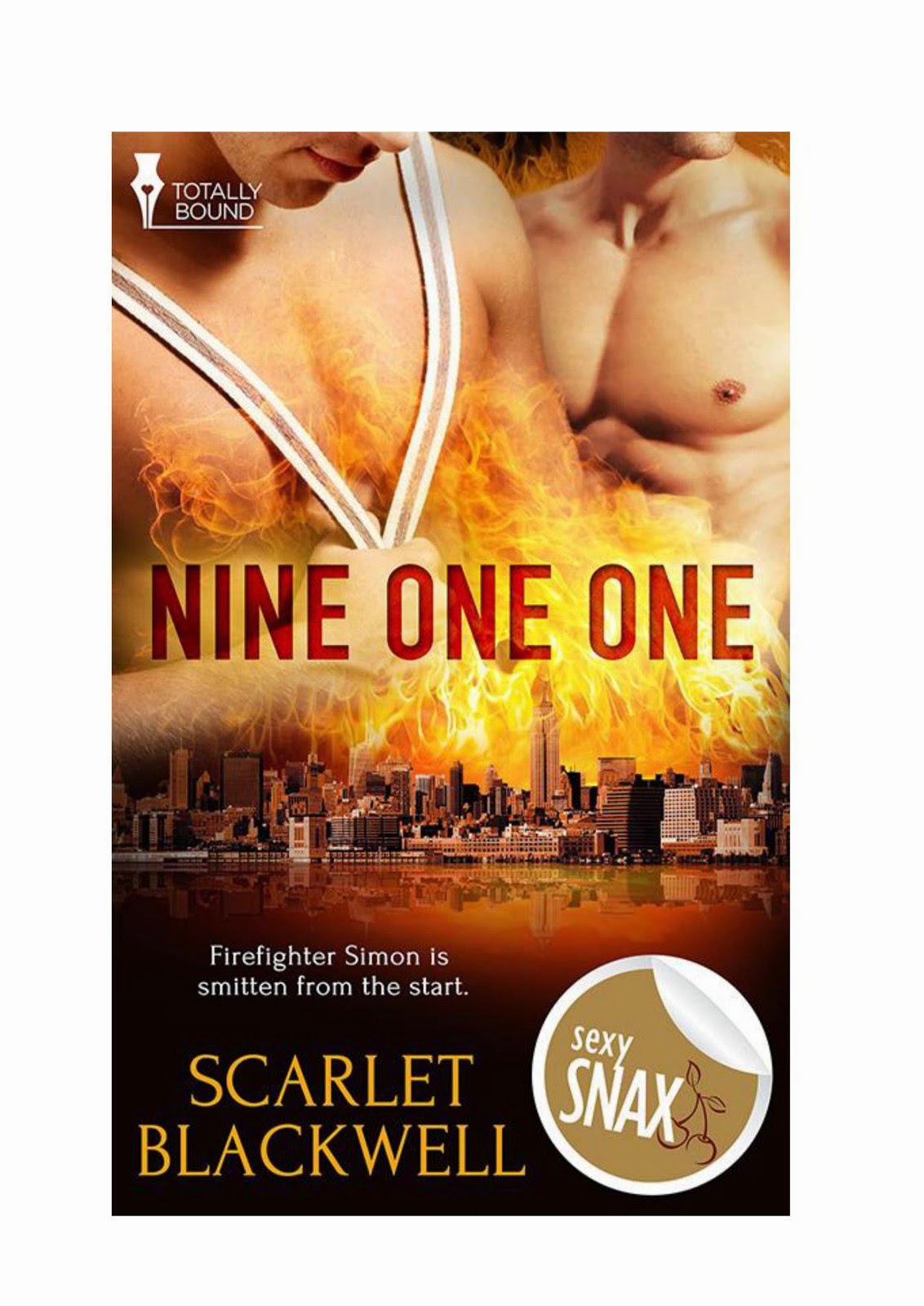 Damon can’t forget 9/11 and all the precious things he lost…It’s ten years after the horror of 9/11. Former NYPD cop Damon Summerfield was there. He lost his firefighter partner, Justin, in the collapse of the Twin Towers and fled to Canada to attempt to rebuild his shattered life. Now he is back in New York for Christmas with his family for the first time since his loss.Still deep in mourning with no end in sight, he visits Justin’s favorite bar near Ground Zero and there meets Simon, a firefighter with the FDNY and a fellow survivor of 9/11. Simon is smitten by him from the start, but despite feeling the same way, Damon can’t bear to give them a chance, not when he thinks Simon’s job will tear them apart someday too…Publisher's Note: This book was previously released by another publisher. It has been revised and re-edited for release with Totally Bound Publishing.

By reading any further, you are stating that you are 18 years of age, or over. If you are under the age of 18, it is necessary to exit this site.
Copyright © Scarlet Blackwell 2014. All Rights Reserved, Total-E-Ntwined Limited, T/A Totally Bound Publishing.

For the second time in a year, Damon Summerfield visited New York—the first had been to be present at the ten year memorial ceremony for the atrocities of 9/11, and now three months later for Christmas.
He’d watched the bagpipe band that September, the girl playing Amazing Grace on a flute, and had stood at the 9/11 Memorial South Pool tracing his fingers over the letters of his beloved’s name. His eyes had welled up, sharp and stinging with a pain he hadn’t known could still cut so deep, then he’d gone to the FDNY Memorial Wall on Liberty Street and seen Justin’s name there too.
Shutting his eyes, he could taste bitter dust and ashes in his mouth again as he ran for his life with the South Tower collapsing behind him and his heart left behind in the rubble.
Damon’s mother had persuaded him to come for Christmas in New York after he’d shunned the city of his birth for the last ten years. But the wounds reopened by the memorial services were still fresh and on Christmas Eve at ten p.m., he found himself in Justin’s favorite bar, a stone’s throw from Ground Zero.
The Full Shilling had changed in ten years, of course it had, but the place still had the hundred-year-old bar that had been shipped from Belfast, the wooden floors, the Irish music and the cozy, bustling atmosphere. Now the pub boasted seventeen draft beers, which was all right by Damon.
A barman in his early twenties smiled at him as Damon climbed onto a tall chair and opened his heavy winter coat, shaking flakes of snow from his hair.
“What can I get you?”
The barman was achingly young, attractive and friendly. For a moment Damon felt a surprising pang of attraction. Surprising because he’d lived like a monk for the last ten years, his interest long dead, buried with Justin. Why look for someone to replace the irreplaceable anyway?
Damon took a moment to peruse the pumps. “Peroni, thanks.”
He followed the barman’s ass with helpless eyes before he realized someone was watching him from two seats down.
A dark-haired man in his late thirties grinned at him as though he read every one of Damon’s desperate, dirty little thoughts. Damon glared back then averted his gaze.
But the stranger didn’t take the hint. He slid off his chair and moved onto the one next to Damon. As the bartender returned with his drink, Damon’s neighbor said, “I’ll take care of that.”
Damon didn’t look at him. “Thanks, I’ll buy my own.”
“Don’t be unfriendly, I’m just being polite.”
Damon turned his head and looked into clear, pale green eyes startlingly at odds with the stranger’s almost black hair. The attractive barman receded from memory as Damon’s attention was grabbed one hundred percent by the stranger’s strong jaw, perfect white teeth and winter porcelain skin. Beautiful, he thought. Utterly gorgeous.
Leaden misery weighted Damon’s stomach. He took a swig of his beer. “Go away.” His palms sweated and his heart raced.
After a moment’s pause, the guy slid from his stool. “No problem.” He walked away, leaving Damon staring longingly after him and remembering various salacious moments of his sex life with Justin. He squeezed his eyes shut, chugged down more beer and finally glanced to the back of the bar where the stranger now sat at a table on his own.
Christ, he was the first man who had stirred Damon sexually in ten years, but not the first he had sent packing. All prospective suitors got the same treatment. Damon wasn’t interested anymore. He’d had his six years of happiness with Justin and those had to be enough to last the rest of his life. He had his memories, his photos, the long-faded scent of Justin on some of the clothes he had kept. Existing had taken the place of living.
Damon looked resolutely away from the stranger who had momentarily interested him. He finished his beer and left Justin’s favorite bar.

I could not help but be affected by Nine One One. I knew it had something to do with the shocking devastation that date is connected to but to actually read about how the survivors grieved and tried to move on, it was difficult.

Damon survived that day but his best friend, partner and lover did not. With one last kiss, he watched his lover disappear into Tower Two and never come out. He watched as others fell around him while he, he survived. His survival guilt was strong and he almost lost hope. His only recourse at that time was to run. And he did, off to Canada.

Ten years later, at the call of his mother, he finally comes home. However, his grief is like an unstoppable force coming at him stronger than ever, in this place where he lost his love. Seeking solace in his former lover's favorite bar, he meets Simon. For the first time in ten years, a seed of attraction warms but instead of making him glad, Damon fears.

Simon is an FDNY firefighter, he had lost friends and a brother on that fateful day ten years ago. After wallowing in survival guilt, he gets the help and moves on. And he does move on like a bee from flower to flower. He never finds the right one to be true to, not until one night he goes to a favorite bar and sees a beautiful but sad man sitting there. He could not resist, he just had to approach.

The connection between Simon and Damon is erotically sizzling but it is laced with so much tears and fear that it was hard to continue reading this at times. As I read this, I could not find a light at the end of the tunnel and I thought this was not going anywhere but a one night stand. Unexpectedly, an angel in disguise comes to the rescue and Damon reaches out to accept the help. This is the move that makes this story work. His willingness to build again, with Simon, it was beautifully written. How it was done, it will have to be read.