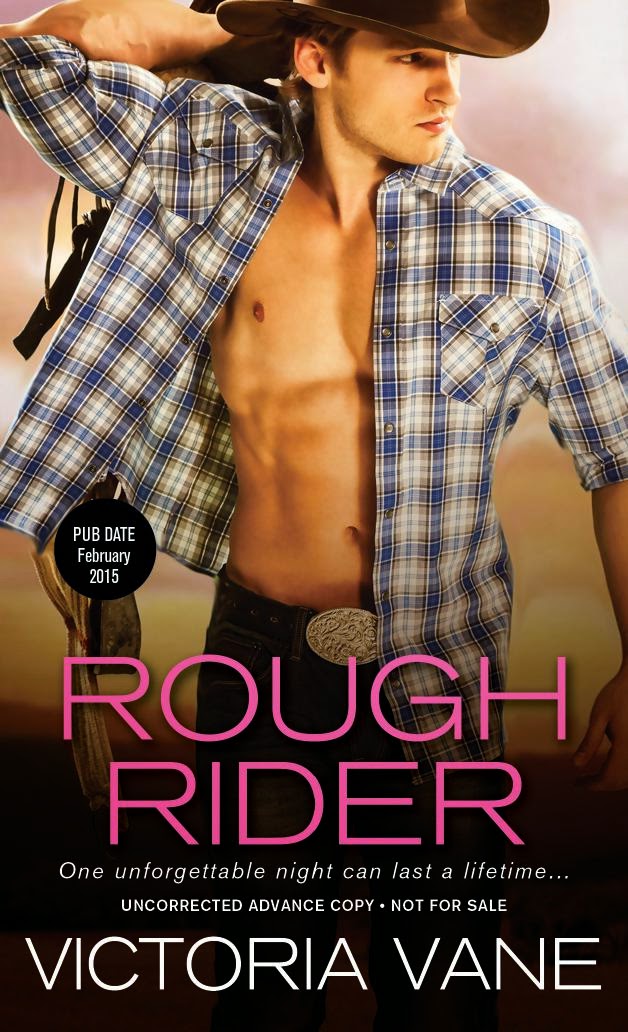 Two wary hearts …Janice Combes has two loves, bucking bulls and Dirk Knowlton. But Dirk only has eyes for a dazzling rodeo queen. How can Janice ever compete while mired ankle-deep in manure? Exchanging playful banter with Dirk is all Janice can expect—until the stormy night he knocks on her door dripping wet and needing a place to crash.
Different Dreams…Dirk Knowlton is living the cowboy dream. Life should be good—roping, branding, backing broncs, riding bulls, but there's a void he can't seem to fill. After getting hung up by a bull, he wonders if this is really the life he wants. Restless and rebellious, he bolts…but there’s a certain cowgirl he can’t forget.
When a battle-scarred Dirk returns to his Montana ranch he's determined to hang on at any cost. Janice has come back home to lick her own wounds. When old dreams turn to dust, can two wary hearts take another chance on love?

After Slow Hand, Victoria Vane continues the story of the Knowltons with Rough Rider. Not only does it give the backstory of how Dirk and Wade became estranged but reintroduces a minor character in the previous installment - Janice - and the pivotal role she played in Dirk's life.

Dirk was the town's golden boy: tall, handsome, a rodeo champion, and boyfriend to its prettiest girl, Rachel. However, teen stardom differs a lot from adult adulation. It carries a lot of responsibility. How much responsibility and expectation a 22-year old could handle without getting stifled is debatable. One day, life as he knows it falls apart and so he does the best thing he can. He runs away.

Janice, on the other hand, knows nothing but responsibility. Everyone counts on her, from her family to the ranch, that she has lost herself. Despite craving Dirk no end, she puts everything else first - and loses him. Finally she has nowhere to go and comes home. When she realizes he's home too, albeit a different Dirk compared to the one that left, she decides to finally take the risk and put herself and their mutual attraction to the forefront. Enough time wasted.

Of course their story will have a happy ending, but it's the journey they must take together that makes this book worthwhile. Dirk has to trust again while accepting he's enough for Janice. The damage his body and soul took while he was away just doesn't have him believing that.

Janice has to be sure she's stubborn enough to tame her ornery cowboy. Not too tame, though. Just on the right side of being wild is the Dirk she knows and loves. Can she push him just enough that he'd be willing to go back on with the ride?

This second installment of Hot Cowboy Nights is so real I could almost take in the smells of the rodeo and the ranch. The sensory combination of cattle, grass, dirt, molasses, and yes, even manure, make up a childhood's worth of memories that are precious to me. But while romantic to so many, cattle ranching and the rodeo circuit are tough lifestyles. It takes an even tougher person to push and fight his way through all the challenges that besiege this endangered yet beautiful way of life.

While it could be taken as a standalone, Slow Hand is really much better understood after reading Rough Rider. The reason behind the quarrel between the Knowltons becomes much clearer. I don't condone what Rachel did to the brothers, but I guess a desperate woman would try anything to get the affection she desires - or maybe feels she deserves? And I can see why Dirk would be so bitter and even extreme in his struggle to keep ranching. If it's all you know and have left, you'd fight for it, too.

Victoria Vane blew me away yet again with her writing. I'm a sucker for just about anything cowboy, but this is more than just a simple tale. The complexity and balance of being a struggling rancher and a man facing seemingly insurmountable personal problems plus a woman just as scarred from an abusive relationship makes for a heartrending story of a couple who faced huge odds and made it. Together.