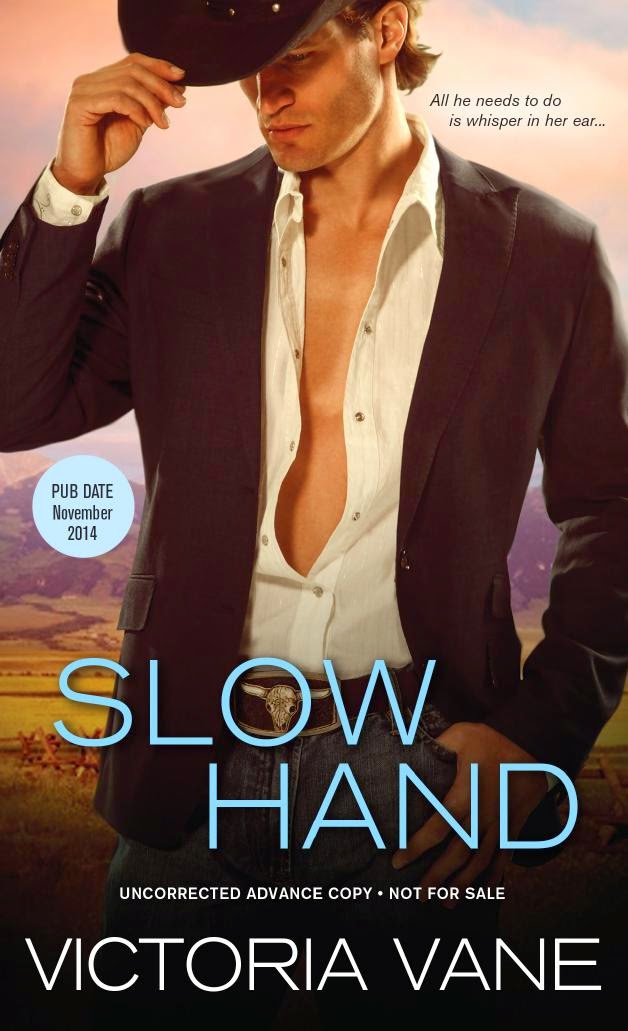 In rural Montana...Wade Knowlton is a hardworking lawyer who's torn between his small-town Montana law practice and a struggling family ranch. He's on the brink of exhaustion from trying to save everybody and everything, when gorgeous Nicole Powell walks into his office. She's a damsel in distress and the breath of fresh air he needs.
Even the lawyers wear boots...Nicole Powell is a sassy Southern girl who has officially sworn off cowboys after a spate of bad seeds-until her father's death sends her to Montana and into the arms of a man who seems too good to be true. Her instincts tell her to high tail it out of Montana, but she can't resist a cowboy with a slow hand...

He went to work on his shirt buttons. His collar was soon wide open revealing a generous show of muscular chest that make her hands itch to rip it off him. She diverted her gaze and curled her itchy hands by her sides.
“Have no fear, cowboy,” Nikki replied in a tone meant to disguise the warm flush that had come over her. “I corralled all my wild impulses long ago.”
“Did you, now?” He still stood in doorway, head cocked. “Somehow, I think you may have missed a few strays.”
“Maybe I need to make myself clearer. I have an aversion to cocky cowboys.”
Just keep telling yourself that, Nikki. Maybe if you repeat it often enough it’ll become true.
“Is that so?” His brows flew upward. “I can’t say I ever met a woman with an actual aversion to me.”
“Don’t take it personally. It’s nothing against you in particular, but to your type.”
“And what do you think you know about my type?”
“Since I don’t have a pole handy, enough to keep you at arms-length. Besides that, this whole line of conversation is entirely inappropriate in light of professional ethics, don’t you think? You are my attorney, after all.”
“Well, darlin’,” he scratched his unshaven jaw, “there’s a little hitch to that.”
“What do you mean? You said you’d help me.”
“And I will, but you can’t engage my professional services until I know who you are.”
“I’ve told you who I am!” she insisted.
“Sweetheart, I’m a lawyer, and according to the law, your claim don’t weigh without authentication.”
“Authentication?”
“Proof.”
“So what are you saying? That you don’t believe me?”
“I’m not saying that at all. Only that our professional relationship will commence once you get your I.D. In the interim,” His gaze slid over her in a way that threatened to melt her insides, “you’d best find yourself a nice, long, sturdy pole.”

In truth, I read Victoria Vane's Slow Hand because I love the song that has the same title. It intrigued me. Would it be the same as the lyrics or go in a different direction altogether? I'm admitting, that song played intermittently while I was reading. And not once was I disappointed throughout the novel.

While there's nothing directly from the lyrics in the story (and in no way am I sure that it even ties in anywhere), the strong, sensual, patient man is quite evident in Wade Knowlton. Yes, I'm also a sucker for cowboys/heroes but there's that different something about Wade. Just when I'd concluded something about his personality he turns around and contradicts it. I like complex characters so this suited me well, too.

Wade would be one of the few people that could handle the cheeky, down on her luck, spirited Nicole. She's barely getting by with her life, plus, with one bad romantic relationship after another, has sworn off the one thing she saw in common with all those men: cowboys. Is it just her luck that her hero rescuer is another cowboy who doesn't seem to approve of anything she does?

Nikki has to sort out more than one aspect of her life and the only one untangling the strings with her is Wade, on top of the heavy workload and responsibilities he already has. But he's not perfect, as she suspects, and is keeping a huge secret from her. He feels he's right to, as it could destroy all the trust and respect she has for him.

But there's that attraction that keeps pulling Nikki to Wade despite everything he does to keep her safe by keeping her away from him. She just needs to decide if she'll take a risk again, this time with more than just her heart, to help out the only man who treated her with kindness.

It's a beautiful story, with a twist on the guy having more complications than the girl, that leaves you with a really satisfied feeling when you curl up with it and a cup of hot mocha. While Slow Hand is a full novel, Victoria Vane crafted a light weekend read that may just have you pulling on a pair of cowboy boots and slow dancing to a country classic by the time you're done.