eARC Review: A Slow Process of Understanding by Faith Ashlin

When Faith was clearing out her attic many years ago, she found a book she'd written as a ten-year-old. On rereading it she realised that it was the love story of two boys. Over the years her fascination with the image of beautiful young men, coiled together as they fell head over heels in love, became a passion for her.
Since that first innocent book—written in purple sparkly pen—she has written many stories, set in varied worlds, but always with two men finding their way to happiness.
Still nothing much has changed because now she can be found in a daydream, wandering around the supermarket, or sitting in a meeting at work still dreaming up stories. 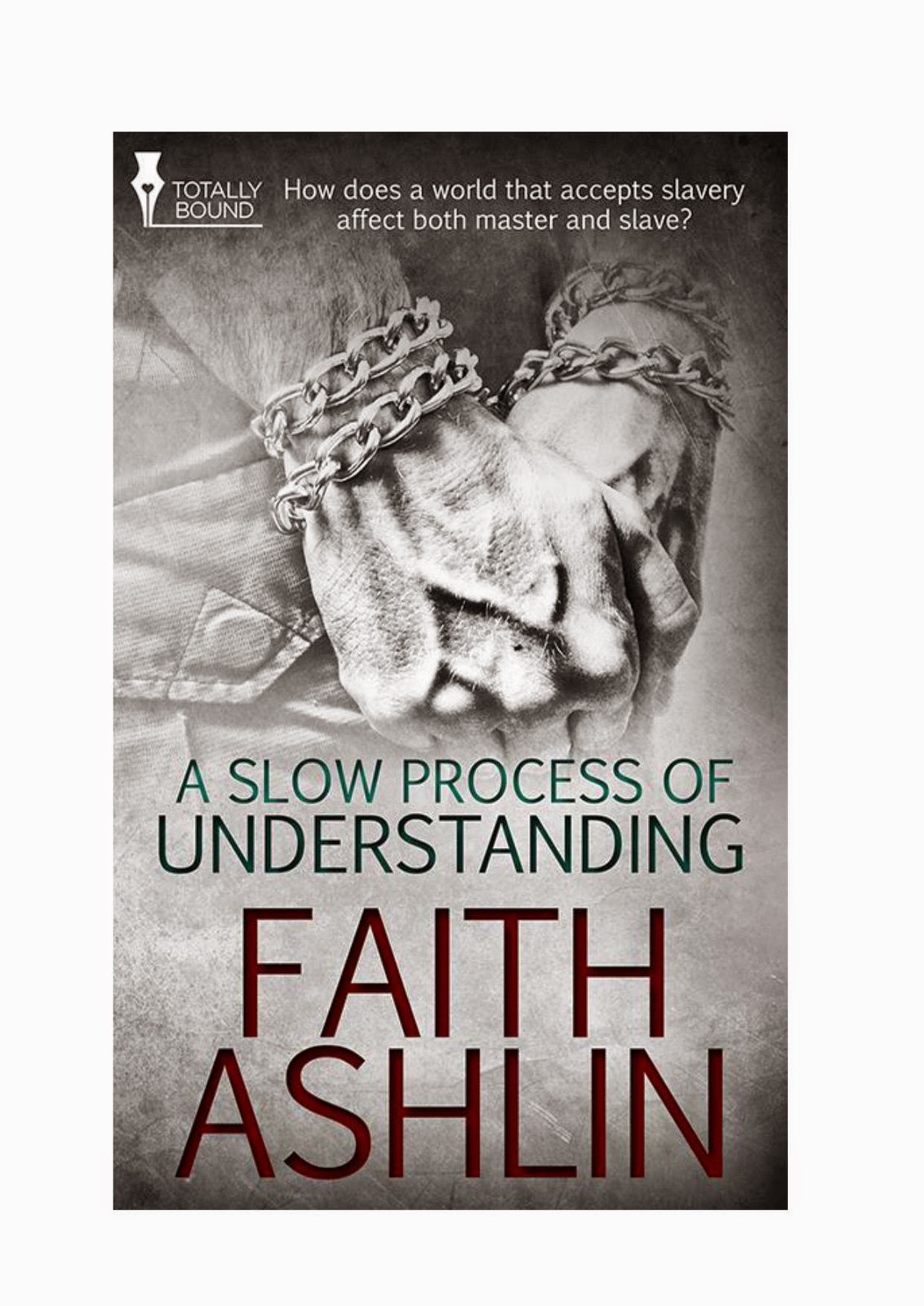 How does a world that accepts slavery affect both master and slave? Can two people build a new life for themselves with a start like theirs?It’s a world like this one except for the all-powerful State that’s very firmly in control and the fact that slavery is legal. Jimmy had never really thought about it or the fight for freedom going on around him. He was too busy enjoying his privileged life as an actor on a sci-fi show.But what is he meant to do when he’s forced to permanently bond to a slave he doesn’t want just because he made one silly, drunken mistake? Does it change who he is, what he is?Trouble is, Jimmy isn’t sure who he was to start with. He’d never thought about it.And what about his slave, Nate? Can a slave force Jimmy into learning something about himself?Reader Advisory: This book contains a scene of rape and references to dubious consent.

I started out reading this with an attitude of hohum. Swear! I thought, okay, here ya go, another one and yeah, the Jimmy character is such an idiot, he is so caught up in his own magnanimity, he is also totally clueless. What a character. Ho. Hum.

Then it all changed and before I knew it, things changed in this story and it became increasingly apparent that I had misjudged this and I really apologize to the author.

We have a world where slavery is legal and everyone owned one, could treat the slaves like animals, considered them lower than cattle, and of course abused them. Remember: slaves are not humans, they are sub-humans. Just like in the good old days before the Revolution in our real world. And frankly, the way this whole book reads, where the owners are so matter of fact in their abuse of their slavery, it was disgusting.

Jimmy is a popular and successful actor but he is a clueless man. He does not even understand why he got into trouble in the first place, does not understand why he went to jail with a violation so stupid he gets bonded to a slave. Bonding meant worse than marriage to a slave, especially a male slave. So there he is, bonded to a male slave he knows not what to do with except that he has to take care of him better than what he had seen other owners do. That attitude of his was the seed that made him special.

Then we have Nate, the slave who got bonded to Jimmy and he keeps a whole lot of secrets. His acting the good slave was done carefully after studying his new master. He wondered how this Jimmy was so without any idea as to who he was and what he stood for. The whole world knew, for crying out loud, but not his Jimmy. Now he will play the cards well so he can get well and get on with his life.

Jimmy falls in love and thinks Nate does too but when reality sets in, he realizes that his slave was not what he seemed to be and it surprised and hurt him. Especially after he learns that he was stupid enough not to know who he got bonded to in the first place. Now, he has to look from a distance at the work Nate and his crew were doing. The work that would change the world slowly but surely. As he looks, he learns and he studies, and he loves. When the learning begins, he no longer walked around with eyes wide shut and he matures as a human being with principles.

OH, this was such an awesome, awesome read! I loved how Jimmy's character changes from someone I could not stand into a man of conviction and dedication to a cause and to a man he was so deep into. Nate was an enigma but his character slowly came to whole once the end was reached. Yes, it's about slavery but it is a story that should be read.