Originally from South Wales, Alexa has lived for over thirty years in the North West of England. Now retired, after a long career in teaching, she devotes her time to her obsessions.Alexa began writing when her favourite character was killed in her favourite show. After producing a lot of fanfiction she ventured into original writing.She is currently owned by a mad cat and spends her time writing about the men in her head, watching her favourite television programmes and usually crying over her favourite football team. 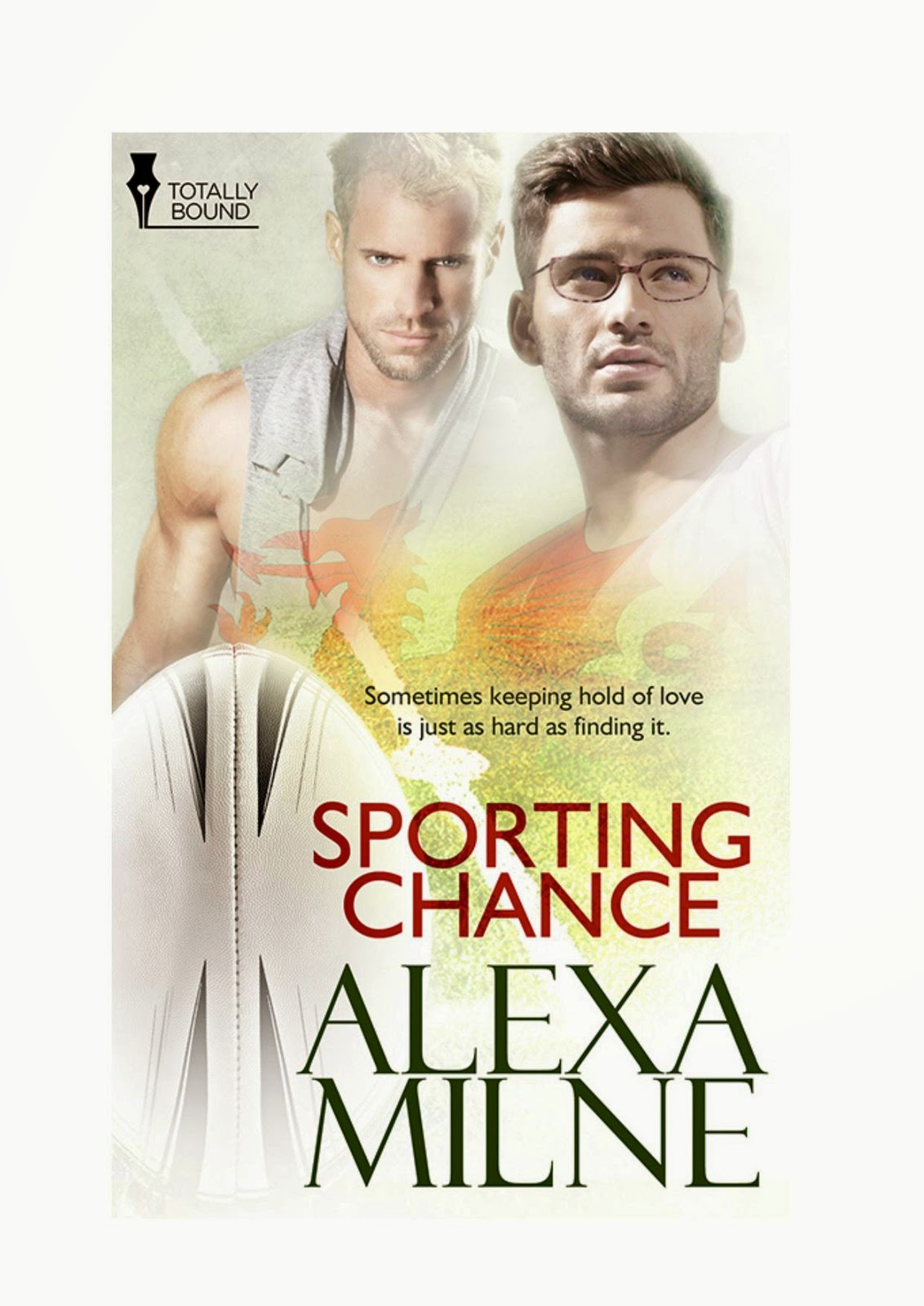 Sometimes keeping hold of love is just as hard as finding it.Dan and Iestyn are looking for romance. A school trip, a love of history, a wedding, a tango, the game of chess, and their friends and family all help the two men to realise that they’ve finally found true love with each other.Iestyn thinks that he’s completely ordinary and that Dan is the only out and currently gay rugby player anywhere. Being gay can be difficult enough. Being famous also has its problems. But being gay, famous and a sportsman can make finding love complicated. So when Dan Morgan meets Iestyn Jones and gives him his phone number, their road ahead has more than a few bumps to overcome.Will Iestyn and Dan overcome the obstacles thrown in their paths? Or will fame destroy their lives as well as their love?

By reading any further, you are stating that you are 18 years of age, or over. If you are under the age of 18, it is necessary to exit this site.
Copyright © Alexa Milne 2014. All Rights Reserved, Total-E-Ntwined Limited, T/A Totally Bound Publishing.

Oh hell!
His arse hit the ice.
This was going to be so embarrassing.
He really should have looked where he was going and taken more care. It wasn’t that he meant to show off in front of the kids when they’d goaded him into demonstrating how he could skate backward. But that was how he found himself crashing into another body, a rather large male body, then scrabbling, unsuccessfully, to try to get himself up as he apologised. Iestyn heard the kids laughing. How the hell was he going to get up and retain some sort of dignity? Whose bloody idea had it been to come on this skating trip from school, and why had he volunteered to go? He heard a voice—a rather gorgeous lyrical voice—say something, but he wasn’t sure what. He found himself looking up into the face of the most handsome man he’d ever seen.
“Would you like some help getting up?” the vision said, holding out a hand.
Iestyn took the help offered and let the good-looking stranger pull him to his feet. He was shocked to find, when he’d stood up, that the man appeared to be significantly taller than his own nearly six feet.
“Thanks,” he said, brushing the ice from his trousers. He glanced over to find the kids staring at him. “What? You’ve seen a man fall over before, haven’t you? Even a teacher.”
But they just kept on staring at the man who had helped him up.
“Sorry about that lot. Honestly, you can’t take them anywhere, and thanks for hauling me up. I’m not very good at this lark, really.” He didn’t want to stare but he couldn’t resist looking the man up and down. His rescuer was impressively built with blue eyes and blond hair that seemed determined to defy any sort of styling.
“Yeah, that much is obvious but don’t worry. I can cope with men falling at my feet. I get it a lot, though usually it’s because they’ve just missed tackling me. The blond, godlike creature held out his hand. “Sorry. It’s not often that I have to introduce myself. My name is Dan Morgan.”
“Ah, judging from the reaction of the kids, I should have heard of you.”
A smaller man, who was standing behind them, sniggered at his comment.
One of the boys rushed forward. “Can I have your autograph, Dan?” he asked.
The other kids came forward too, offering whatever they could find for him to sign.
“You don’t have any idea who I am, do you?” the younger man said as he signed the autographs.
“No, sorry. I don’t, but obviously the kids do, so you’re either some sort of pop star or, from what you’ve said, a sportsman. I’m guessing rugby.”
Josh, a character in Iestyn’s form, stepped forward. “Take no notice of Mr Jones. The only game he plays is chess. He wouldn’t know one end of a rugby ball from the other.”
“Well, to be fair, they are actually pretty similar,” Dan replied.
Iestyn frowned at Josh, not for the first time, then looked back at Dan. “So you play rugby then, and I should know this because?”
“Bloody hell, sir. Sorry, but he’s Dan Morgan.” Now it was Josh’s turn to frown. “He plays for Glamorgan Giants and Wales. Most experts reckon that he’s going to be Welsh captain for the Six Nations. Call yourself Welsh, sir!”
“Actually, that’s rather a moot point. I may be called Jones but I wasn’t born in Wales, despite my father’s best efforts. I was born in the Highlands of Scotland, because we were on holiday and I came earlier than expected. My dad was gutted, I can tell you.”
“Sounds like an interesting story,” Dan said. “Perhaps you’d like to tell it to me sometime soon, maybe over dinner.”
Iestyn Jones blinked a few times and wondered if he’d heard right. Had this guy just asked him out? Dan had to be at least ten years younger than him, not to mention six inches taller.
Dan passed him a card that said “Ring me” and gave a number. He smiled and walked back to greet his friend who had been standing some distance away. Watching him go, Iestyn held onto the card and twirled it in his fingers, not sure how to react to this strange development.
“You’re in there, sir,” he heard a familiar voice say.
“Shut up, Josh. Come on. I see Miss Jenkins over there tapping her watch. It’s time we weren’t here.”
“But, sir, he’s gay and you’re gay,” Josh persisted.
“Really?” He shouldn’t have been surprised. His gaydar was normally useless. “Never mind that. I don’t need a matchmaker, thank you.” That he was gay was no secret to the kids or to any of the other staff.
His best friend Julie Jenkins came towards him. “Is it right what the kids have just told me? Have you just been asked out by Dan Morgan? My God, he’s gorgeous. I can’t tell you how many women would like a piece of him.”
“Well,” Iestyn said, grinning widely. “It seems that Dan Morgan wants a piece of me.”

Ho Ho! This was a huge, HUGE! surprise!

According to the author bio at the beginning of this read, this is the first novel for author Alexa Milne. As a first novel, this was a success for me!

This is the story of impossible dreams that do come true, if those who dream do something about what they envision their lives to be and allow no hurdle bar their way to success.

As a gay man, it is almost impossible to make it big in sports, especially such a rough sport like rugby. Dan Morgan is a huge captain and he runs through his opponents like a brick wall on wheels. His sheer perseverance and support from the people he loved when he first started out helped spur him to success. Success is not so cool with relationships, however, and soon Dan realizes that being successful in the sport he loved may not necessarily equate to success in boyfriend relationships. Reeling from an unexpected and painful breakup with his long time boyfriend, he meets and falls hard for Iestyn Jones.

Iestyn (pronunciation: Yestin = yeah, I looked it up. If you want to hear it, click HERE) is a history teacher and thankfully his co-workers and students have accepted his openness. His love for history crossed over very well to his students and so is considered a beloved teacher by them. When he falls on his butt at the foot of a six-foot-six hunky hulky rugby player, he never thought he would get a second glance nor get asked out on a date. Will he be given the sporting chance to even think of a happily ever after?

The way the author wrote this, she set the stage of a beautiful love affair that soon would soon turn sour because circumstances did not give the men the chance to live their lives. Intrusion into the private lives of the famous ruins lives and yet it continues because of greed. How the two men finally get their chance to finally have their happily ever after is a beautiful journey that was both heartbreaking and sweet.

This, I cannot but help love and recommend to all romance lovers - especailly those who love the sport.

Note: Copy furnished by Totally Bound for an honest review.

Posted by multitaskingmomma at 2:44 AM