Having been, at various times and under different names, a minister’s daughter, a computer programmer, the author of paranormal mysteries, a game designer, an organic farmer, an avid hiker, and a profound sleeper, Eli is happily embarking on yet another incarnation as a m/m romance author.
As an addicted reader of such, she is tinkled pink when an author manages to combine literary merit, vast stores of humor, melting hotness and eye-dabbing sweetness into one story. She promises to strive to achieve most of that most of the time. She currently lives on a farm in Pennsylvania with her husband, three bulldogs, three cows and six chickens. All of them (except for the husband) are female, hence explaining the naked men that have taken up residence in her latest fiction writing. 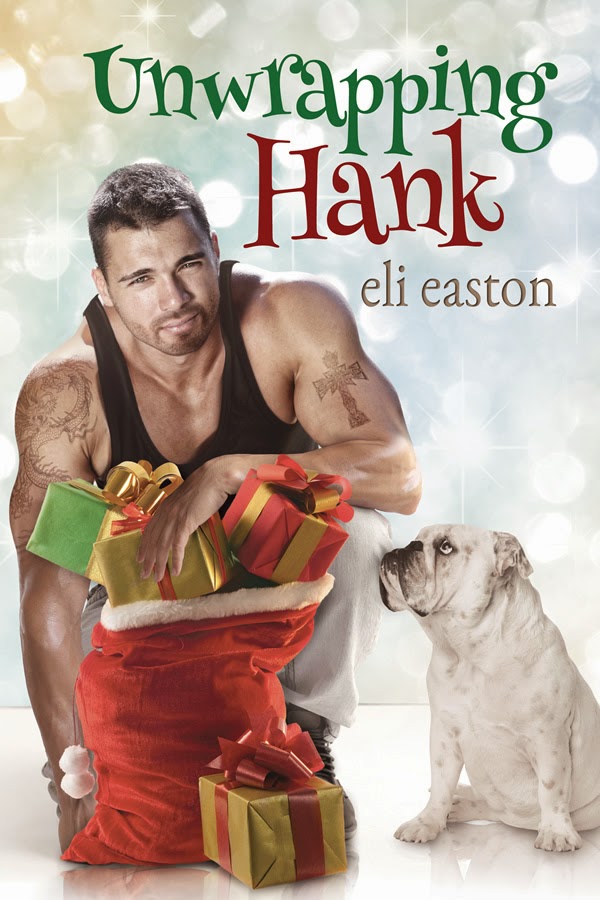 Sloane loves a good mystery. He grew up as the son of two psychiatrists, so he finds most people tediously easy to figure out. He finds his way to Pennsylvania State University, longing for a rural experience, and ends up being lured into joining a frat by Micah Springfield, the hippest guy on campus.Nothing in Sloane’s classes is as intriguing as Hank Springfield, Micah’s brother and fellow frat house member. Hank looks like a tough guy—big muscles, tatts, and a beard—but his eyes are soft and sweet. He acts dumb, but he’s a philosophy major. He’s presumably straight, but then why does Sloane feel such crazy chemistry whenever Hank is around? And why does Hank hate Sloane so much?When Sloane ends up stuck on campus over Christmas, Micah invites him to spend the holidays at their family farm in Amish country. It’s a chance to experience a true Americana Christmas--and further investigate the mystery that is Hank Springfield. Can Sloane unlock the secrets of this family and unwrap the heart hidden inside the beefcake?

With an irresistible cover like that, how can anyone reject this read?

Unwrapping Hank is a Christmas novella that is highly entertaining, sweetly romantic, and bulldogishly irresistible. This is one story that is hard to put down once started and harder still when it ends.

Sloane has psychiatrists for parents who know not where to set their butts in terms of roots. They are carefree, they are thinkers, and very accepting. Raised like that, and in France most of his life, Sloane astounds them by choosing veterinary science as a course and nearly sends parents to coma when he decides to take said course in Pennsylvania State University. He wanted to be American, feel American, and just be rural for once. So he went and got rushed into a fraternity whose president, Micah, was feeling the need to be sophisticated and open-minded.

Hank was one of the few who voted against this unknown Parisian, not because he was strangely foreign, but he was just so, strange... Opposing every move Sloane did was just one of the things he was good at. Not really caring Sloane was around was another. It was working, so far.

Micah, not standing for any new recruit bullied or feel invisible, decides to push the two together and make them work on their fraternity's Christmas party that will end all other frat parties on campus. The clash of wills begin but instead of chaos and brutal bloodshed, Hank and Sloane do work it out and worse, find they have a lot in common.Which just makes Sloane think that Hank is an enigma that needs to be solved, and Hank thinking that Sloane was dangerously beautiful in both mind and body.

It was funny watching, er... reading the romance unfolding, especially when it happens right under Hank and Micah's parents' noses, in their house, when Sloane unexpectedly finds himself home- & holiday-less. Hank's determination to resist was funny, Micah's moves to make the romance happen was amusing, and Grinch's moves to be the manipulative little bull-puppydog was just the icing on the cake.

Unwrapping Hank is discovering the multiple layers of Hank, a man of true contradictions if ever there was one, all done lovingly and with amusement by Sloane. And it all happens this Christmas.