Blaine D. Arden is a purple-haired, forty-something author of gay & trans* romance mixed with fantasy, mystery, and magic who sings her way through life in platform boots. 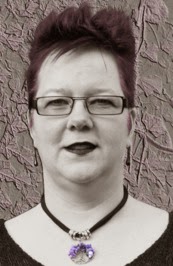 Born and raised in Zutphen, the Netherlands, Blaine spent many hours of her sheltered youth reading, day dreaming, making up stories and acting them out with her Barbies. After seeing the film "An Early Frost" as a teen in the mid-eighties, an idealistic Blaine wanted to do away with the negativity surrounding homosexuality and strove to show the world how beautiful love between men could be. Our difference is our strength, is Blaine's motto, and her stories are often set in worlds where gender fluidity and sexual diversity are accepted as is.
When not writing or reading, Blaine has singing lessons and hopes to be in a band someday. Supporting Blaine in pursuing her dreams and all matters regarding household, sons, and cairn terrier, is her long-suffering husband for over twenty years.
Blaine has been published by Storm Moon Press and Less Than Three Press, and has recently signed a contract with Wilde City Press. Her scifi romance "Aliens, Smith and Jones" received an Honourable Mention in the Best Gay Sci-Fi/Fantasy category of the Rainbow Awards 2012. 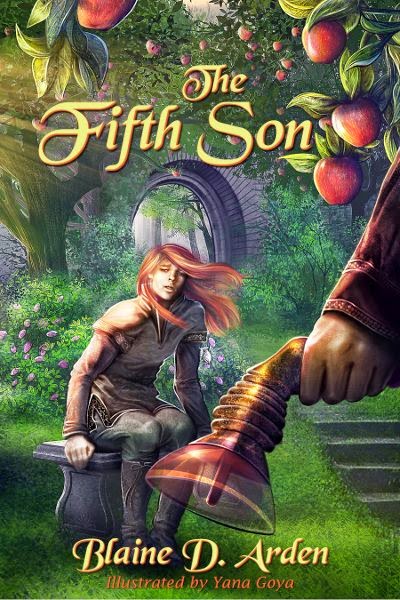 A prince without power
In a land where magic is commonplace, Prince Llyskel has none. He can’t command spells, he has never been taught to fight, and as the fifth son of the King, he will never rule. Everyone believes he’s a weakling, most of all himself.
Powerlessness is Llyskel’s problem—and his pleasure. In his secret fantasies, the prince dreams of nothing more than finding himself helpless at another man's hands… particularly the hands of Captain Ariv of the Guards.
Then Ariv makes Llyskel’s dream a reality, and as the powerless prince surrenders to the soldier’s desire, he finds his own true strength at last. But a web of royal politics is closing around Llyskel, threatening to tear him from his lover, and it will take all his newfound courage to escape…
Contains five shaded black-and-white illustrations by Yana Goya
NOTE: This is the second revised/re-edited edition of The Fifth Son. It was previously published by Storm Moon Press. 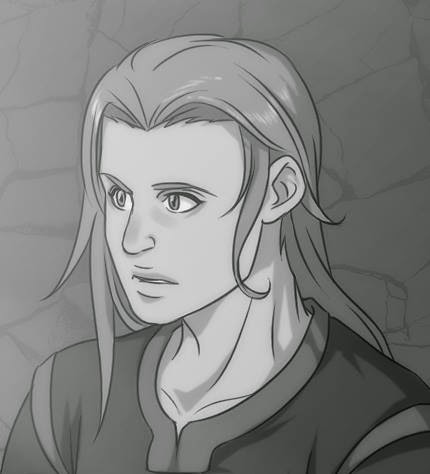 Meet Llyskel. Llyskel is a tall, wiry twenty year old, has four rowdy older brothers, is a very talented artist, and... oh... he is a prince and lives in a castle--in his own tower, even. Sounds like he has his bed made, right? What more can a young man like Llyskel want?

You see, Llyskel lives in a world filled where magic is commonplace. Everyone in Llyskel's world possesses magic to some degree, and almost everything is operated by said magic: doors, windows, lamps, and even tea kettles. But... Llyskel was born magicless. At the age of six, the age children come into their powers--not even the tiniest spark of magic started burning within Llyskel. Doors didn't open as he approached, his mother had to turn off his lights as she put him to bed, and he couldn't heat up water to wash.

A child without magic in a magical world needs to be protected.

Or so his parents thought. They wouldn't let him play with his brothers, for fear their spells would hurt him. They wouldn't let him wander around the castle grounds without a guard to keep him from being harmed. They wouldn't let him train, at least, not until his late teens. Because what use could a vulnerable boy with no powers be on a battle field, even if there had been no war since before Llyskel was born? So, while his brothers horsed around and trained to be soldiers, all Llyskel could do was watch. Watch, and draw, and desire to be just like them.

Until his desire took on a different form.

Spending a lot of time near the training fields, Llyskel became enchanted by the shooters--guns made for the purpose of channelling a soldier's magic. Next to his usual landscapes and portraits, Llyskel started painting soldiers, or rather, soldiers' hands holding their shooters, while wondering how being stunned would feel. Of course, aside from no one even daring to use spells on young Llyskel, Llyskel couldn't make himself bring up the subject with any of his lovers.

Until an impromptu meeting with Captain Ariv, who seemed to know exactly what Llyskel wanted.

I love fantasy and it is really nice to stumble upon one that is light enough to read within two hours and still end with a nice smile on my face. I really smiled HUGE! after reading  The Fifth Son. This is almost like a fairy tale complete with prince meets the man of his dreams and wicked characters who swoop in and make a solidly comfortable story into a suspenseful one.

We enter a world where magic is the norm and those who do not have magic are looked upon with pity and protected at all costs. Prince Llyskel is the fifth son of a powerful king and he was born without magic. As everything around him is magical, even the doors and windows, it was feared that this little prince would fall to harm. The king and queen order that when it comes to their youngest, all must be very careful.

As the little prince grows up, he took things for granted but also was frustrated to no end. His lack of magical abilities made it impossible for him to play with his brothers. He has to go around with a bodyguard at all hours. He has to practice his defensive arts alone. In short: he grew up lonely. He has one consolation: his art. And with that art comes the dreams.

As Llyskel grew to be a young man, the natural course of events of all young men are experiences he never encountered but it did not stop him from feeling them. One such man who made these feelings impossible to ignore was Ariv, the Captain of the Guards. This is the one man Llyskel dreamed of but could never have. Well, not until that fateful day when Ariv assists him and then the game changed. For both.

Ariv is a warrior and he was groomed and trained to protect. His magical abilities were strong enough to get him to the rank he now enjoyed. Falling in love with a prince is not an easy thing. Especially after he discovers that Llyskel is not at all as he seems.

For those of you who enjoy fairy tales like I do, this is the perfect read to either take to bed or just relax with a cup of tea.

To get a chance to win an ebook copy of The Fifth Son, leave a comment below and don't forget to leave your contact email address.

We will randomly pick 1 lucky commentator and Blaine Arden will email them their ebook version of choice  (epub/PDF/mobi).

Posted by multitaskingmomma at 5:07 AM