M. S. Parker is a USA Today Bestselling author and the author of the Erotic Romance series, Club Privè and Chasing Perfection.
Living in Southern California, she enjoys sitting by the pool with her laptop writing on her next spicy romance.
Growing up all she wanted to be was a dancer, actor or author. So far only the latter has come true but M. S. Parker hasn't retired her dancing shoes just yet. She is still waiting for the call for her to appear on Dancing With The Stars.
When M. S. isn't writing, she can usually be found reading- oops, scratch that! She is always writing

Why in the world had I agreed to go home for my five-year reunion when I hated pretty much all of my classmates? Right, because I was an idiot. I should've known better.
When Las Vegas exotic dancer, Piper Black, goes back to Philadelphia for her reunion, she knows it's not going to be an enjoyable experience, and she's right...until she ends up sleeping with her high school crush. What she doesn't know is that Reed Stirling has a secret that ruins everything.Can he make things right? And even if he does, will Piper be able to forgive him?
Don't miss the titillating Vol. 1 of Sinful Desires by USA Today Bestselling author, M.S. Parker 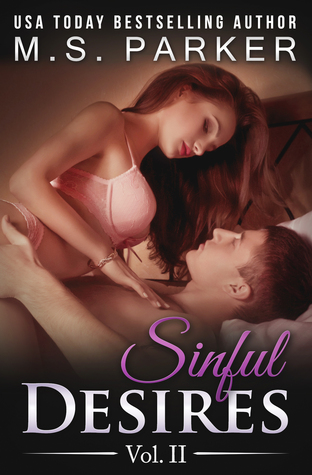 
I wasn't entirely sure why I'd accepted Brock's invitation to be his date for his sister's wedding. A wedding to a man who'd confessed that he didn't love his wife-to-be. All I knew was that I didn't belong in that world.
When Piper Black returned to Philadelphia to attend the wedding of the man who'd broken her heart, she never imagined that she'd end up falling for her date...who just happened to be Reed Stirling's new brother-in-law.
Will Brock Michaels be able to heal Piper's heart or will her connection to Reed tear apart more than one relationship?
The second volume in M.S. Parker's sizzling Sinful Desires series isn't to be missed.


Review for Sinful Desires I and II

Initially, I had only signed up to review the first volume of Sinful Desires but M.S. Parker was so generous to send ARCs of two volumes instead of just the first. It seemed silly to only review one when two were present, especially considering the cliffhanger ending that was essential in volume one and, unfortunately for me, also in volume two. 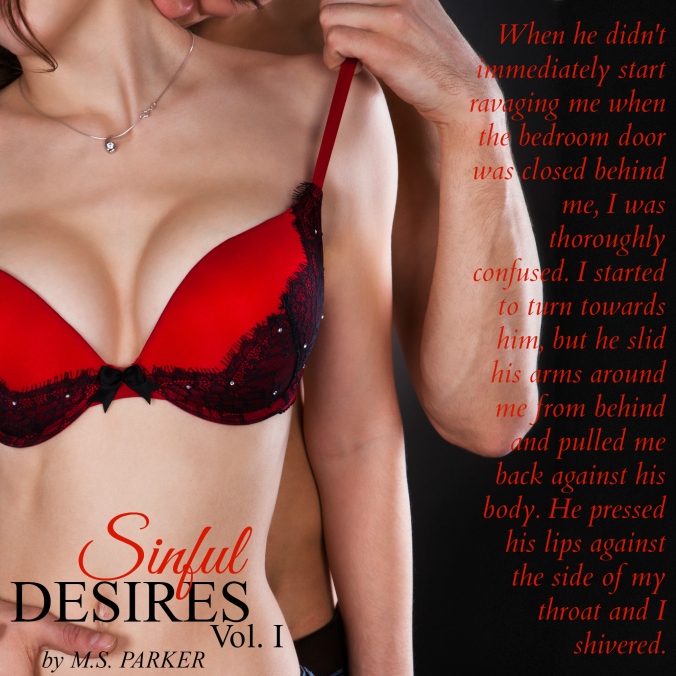 Spoilers aren't something I enjoy, so I won't touch too much on the plot as the twists are a big part of this quick, light read. But I will say that Reed turns out to be a guy I would love to squash like a big, fat, juicy, tick. The nerve of this man! Augh!

Piper Black never fit in, mostly because she was from the wrong side of the tracks and was bullied by most of her high school classmates. It was only her best friend Anastascia that made life tolerable as the sole scholar in an upscale school. Otherwise, she either didn't exist or was ridiculed. Not quite a basis for fond memories of teen years.

It didn't get any easier as she grew older as her mother fell sick and was fired from her job, forcing them both to survive on Piper's meager savings for dance school. Her mother's death was more than she could take and she moved to Las Vegas with dreams of breaking into the world of dance.

They unexpectedly meet again in Las Vegas while she's doing her job, and it's not a happy encounter. She also gets off to a bad start with Brock Michaels, who decides to make up for it by paying her to be his date at an upcoming wedding. What happens afterwards is something she never expected. Is Brock the man she hopes he could be? Is he sincere in what he says and does or is he playing her, too?

Piper is a realist, and while she isn't proud of how she ended up, she tries to keep her dignity while making a living. There aren't any starry-eyed dreams of how she'll end up with a rich, handsome man or make a fortune overnight. She has her feet on the ground and her eyes wide open. But each time she tries to think positively, she gets burned. Badly. It's not a wonder that she has no faith in humanity.

Reed may be the main character here but he is someone I love to hate. He might be sweet, but there is no backbone to be seen in him anywhere. He can't make a choice, he can't stand up for himself, and he can't think. If there is something positive about him, I don't see it yet. No way would he be my choice for hero - even if I think that's how he'll end up - which shows how well M.S. Parker weaves a story and got me invested in the characters!

What happens in the third volume of Sinful Desires? How will M.S. Parker make Reed likable (for me, anyway)? Or will Brock win the girl? Piper needs to make some hard decisions and I must to know what they are!


I was shocked when Brock asked me to move back to Philadelphia and even more so when he'd declared that he'd choose me over his family. Reed, the man I'd thought had honor had turned out to be a bastard, but the guy who everyone said was bad news was starting to look a lot like a white knight.
Back in Las Vegas and trying to decide what to do about Brock Michaels' offer, Piper Black finds herself torn between the man she cares for and the reputation he supposedly has. She tells herself that he's changing for her, but she isn't sure if that means she wants to move for him.Is Brock really who he seems to be, or is he just one more man who will break Piper's heart?Find out the truth in this third installment of M.S. Parker's smoking series, Sinful Desires.


How could I have been so stupid? Anastascia had told me that Brock was bad news but I'd never dreamed what he was capable of. First Reed, then Brock. Was my taste in men really that awful?
When Piper Black finds out the truth about her first encounter with her boyfriend Brock Michaels, she's devastated, but things only get worse when a familiar face shows up at the wrong moment.With her life in shambles, Piper is given the opportunity for a new start... back in Philadelphia.
Will her luck change if she moves back? And what will it mean being in the same city as the one man who's never left her mind?
In this penultimate installment of M.S. Parker's sizzling Sinful series, the intrigue is hot, but the passion is even hotter.

What was wrong with me? When Reed showed up at my house and said that his marriage was over, I should've been thrilled. So why was I thinking that maybe he wasn't what I wanted after all?
When handsome and rich Reed Stirling says he's giving up everything to be with Piper, she knows that this should be everything she's ever wanted. But something is holding her back, and she's pretty sure it isn't just her justifiable trust issues with men.
Former Vegas stripper Piper Black is torn between what she's always thought she wanted and something new that she'll have to fight for. Will she be able to figure out what her heart truly wants, or will she lose everything?
Don't miss this final steamy installment to M.S. Parker's Sinful Desires series.

From the first to the fifth installment of Sinful Desires, M.S. Parker keeps you guessing what Piper's ultimate decision will be. Till the last few pages, you still aren't sure. Talk about dramatic tension!

Though some readers may think from this review that the story would be dragging because of that stretching out, it's the exact opposite. These short novels manage to engage and hold interest. Maybe, for me, partly because Piper's taste in men suck and make me debate between her being celibate for the rest of her life and ridding herself of men problems entirely or rooting for the dark horse in this story while putting the blinders on her so she'd know exactly where to go. 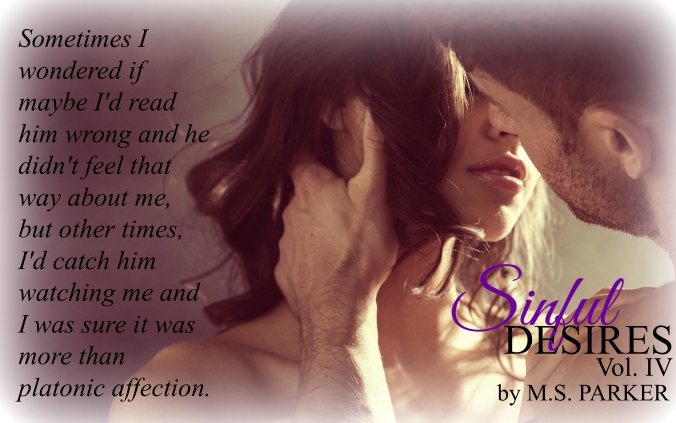 Piper has moved back to her hometown and reconnected with Anastascia. However, she's unwilling to be a moocher and moves into her own place near where she works and studies to be a dancer. Despite how she'd been wronged by Reed, she's grateful that he created a scholarship for her so she could finally study serious dance and make a name for herself with her talent rather than with her body.

Brock, far from being a night in shining armor, is proven to be exactly what Piper and Anastascia suspect him to be. This puts Piper under pressure and quite a lot of stress while circumstances are straightening out Brock's life for him. He has to answer for his "habits" and Justice is hellbent on collecting her due. 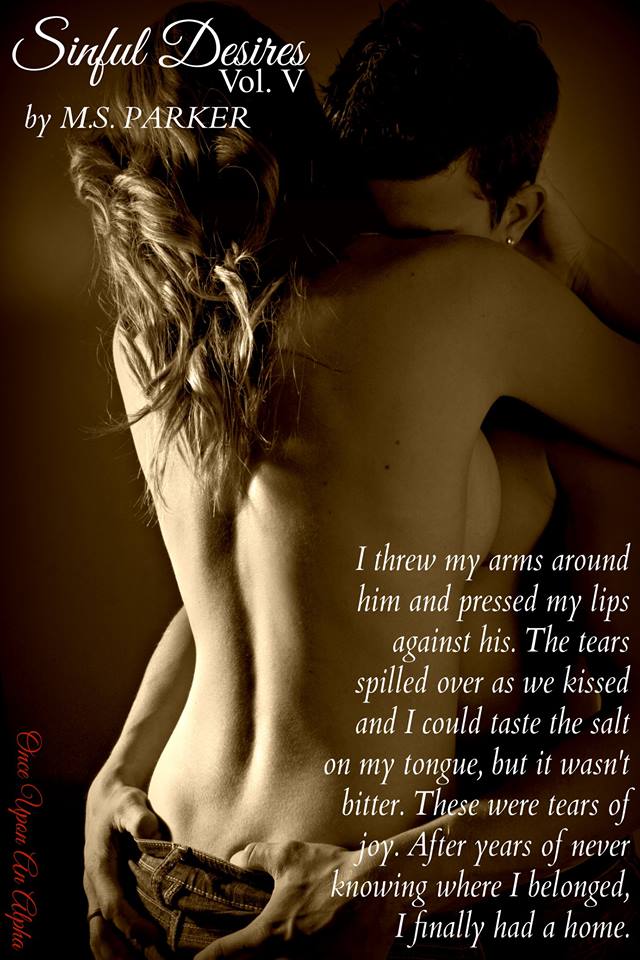 This fun diversion is best read all at once because the endings of each installment test your patience. All, except the fifth of course, have those awful cliffhangers that make you want to crawl to the next part. Don't, I repeat, don't get them one at a time. You'll regret it, I promise you!

Sinful Desires is a prime example of why I hate installments; it's because I can't get to the ending fast enough. And that conclusion isn't in my hands to read! Augh! M.S. Parker, I don't know whether to admire you for writing so well I had to find out the end or hate you because I was waiting for the next part. But I think the admiration side wins. I think. Hehehe.