L. G. Fabbo-Gonnella is a resident of the NYC metropolitan area. Since an early age he has been interested in "Dr. Who", all things vampire, the late 1940's noir movie styles, pulp fictions and murder mysteries.
When not writing he can usually be found at his version of the "Letter Lounge" drinking a chilled cocktail with friends. Although he does not know of any vampires, he holds out the hope to one-day bump into one in a non-lethal encounter. 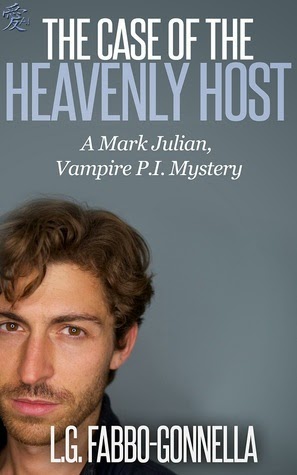 The Case Of The Heavenly Host (A Mark Julian, Vampire P.I. Mystery #3) by L.G. Fabbo-Gonnella

This is a series that takes place in NYC and involves a vampire, Mark Julian, who is the nephew of Augustus Caesar. He is a private investigator to the city’s supernatural community. He meets and falls in love with a human Detective named Vinnie Pasquale.
His secretary, a sex demon shape shifter named Jaime, who loves to dress in the style of the 1940’s, assists Mark. By book two she meets her future love, Jean-Claude, the crown prince of the City’s major werewolf clan.
Mark and friends solve cases while battling wits with Tortego. He is the autocratic head of the supernatural city govt, a former head of the Spanish Inquisition and a vampire who fears losing power to democratic counsel reformers like Jean-Claude.
By book ten you meet a cast that runs to approx., twenty and the reader not only has a mystery case in each book but also reads about power struggles, frustrated loves, prejudice against mixed supernatural couplings etc. unfold during the books thus far.

Despite Mark’s eagerness to dive right into the investigation, he realized he needed to be patient until the next day when the names Raphael promised would be provided to him. He left his office for home thinking that at the very least he could discuss the general outlines of job he was undertaking with his lover. He had long
realized that, as a NYC detective, Vinnie’s perspective on cases was a valuable resource.

Unfortunately Vinnie was not home when he arrived. Hoping to secure any possible information about the sword’s whereabouts Mark pulled out a Bible that Vinnie’s mom had given to her son.

Though there were passages mentioning the Archangel Michael, nothing in any of them indicated what had been the fate of his sword. He was soon frustrated. With no other ideas on what to do next, he decided he would try to get some much needed sleep until Vinnie’s return.

Despite his best efforts however, all he could think about his current lack of a clear plan to successfully complete the job. He was still tossing and turning in their bed at three in the morning when an exhausted Vinnie got back to their apartment. The PI heard his lover making the same type of racket he always did when he was late getting home at night, while endearingly trying not to be noisy. Somehow the brawny New York City detective was simply incapable of being quiet. Mark sighed, just happy to know his soon-to-be spouse had arrived back safely.

While he listened to Vinnie showering he wondered about the case the latter was currently assigned too.  Normally they shared the details of their respective cases, but this one had become the exception to that rule. For some reason, Vinnie was under strict orders not to divulge any of the facts about it to anyone. Although he had tried to pry something from Vinnie, the latter had insisted he had given his word of honor to keep silent. Once Mark heard that he stopped all further inquiries on the matter. Vinnie took great pride in keeping his promises and he did not want to be the cause of the detective not keeping such a commitment. Vinnie’s belief in keeping one’s personal integrity was another quality that bound them even closer.

He heard the shower go off and then a few minutes later, Vinnie’s quiet footsteps moving toward their bed.  Bad day, hon?” Mark quizzed.

“Always a bad day,” Vinnie muttered. “About to get better.”

In a few seconds Mark felt the powerful presence of his lover’s  well-muscled, taller frame spooning close to his own back. Mark wanted to inform Vinnie right away about the day’s events.

Vinnie’s actions however, clearly indicated he had something other  than a nice chat in his mind. As he felt the heat of his lover’s torso pressed against him, Mark decided to simply enjoy the moment.

They had the rest of the night to discuss the location of a sword.

“God, I miss you every second of every waking moment.” Vinnie  kissed Mark’s ear before beginning a sensual nibbling. His bristly five o’clock shadow erotically scraped along the surface of the side of Mark’s neck. The vampire felt his heart beat faster as familiar sensations of pure arousal flared.

“Oh, you do, huh,” Mark whispered as he pushed himself  backward into Vinnie’s powerful embrace. He sensually wiggled his rump against Vinnie’s aroused manhood until, as he hoped, he felt his partner moan with delight.

“Oh, babe,” Vinnie grunted as he pulled Mark tighter towards him.

The detective kissed the now tender skin of Mark’s neck. His warm breath brushed against the vampire’s hair. “More,” Mark mumbled as he used his hips to wiggle his rump faster across Vinnie’s growing erection.

“Fuck,” Vinnie gasped as he humped against Mark’s backside.

Soon both men were fully erect.

“Oh babe, I’m so beat I don’t think I have the energy.” Vinnie chuckled, even as the erection that was pressing on Mark’s rear seemed to indicate otherwise.

Mark shifted around so that he could face Vinnie. His own respectable arousal now pressed against his lover’s. “Really? Too tired?” He teased as he leaned his head forward towards Vinnie’s so they could kiss. Vinnie’s slowly traced the outline Mark’s lips with the tip of his tongue while Mark let his right hand descend between their bodies to fondle Vinnie’s nipples. This action brought gasps from his partner as they stiffened under Mark’s grip.

“Well, maybe not that tired.” Vinnie groaned as he reached downward to firmly take their joint hardness into a grip of his own.

He slowly pumped them both as they continued kissing. By now their bodies were sweating. “Mark, I love you man.” Vinnie hissed in the height of ecstasy, as he rested his head on Mark’s shoulder.

I have read so many vampire themed stories I have lost count. So what makes Mark Julian different from all the rest? Well, for one, this is no Twilight character, another, he has no uber-drama-queen reaction to fighting off his instinctive response to the presence of blood, third, well he panics!

This is the third of the series and while reading it, I found this could stand all on its own. Of course, being a third of a series, those who decide to read this alone will be kept guessing over what was going on in the previous installments without really getting to that point where I felt lost without them. (Yes, I read the first two, so now worries for me :D so I recommend reading the whole to get the full impact of the way this one ended!)

From start to finish this had an air of mystery to it. Mark is on full panic attack mode because he is left to do all the arrangements for his and Vinnie's upcoming nuptials. Thing is, Vinnie's mom and her best friend are coming in to help out. They have a thing going these two women and Mark is scared of them. Then there is Mark's sort of boss who wants to have a hand in the ceremony itself. Things go to a head with the Church itself when an archangel comes in to hire Mark to find something for him.

Yes, an archangel. You read right. Archangel Raphael has come down from Scotland and bids Mark to find the Sword of Light fashioned by Archangel Michael. He gives him a list of people who have fragments of information Mark would need to get to the location. Sounds easy enough.

Unfortunately, Mark discovers that his list is a death list of sorts, one that a couple of malignant fallen angels in the guise of angelic innocence are using themselves. The race is on. The violence gets nastier by the turn of the page.

Vinnie falls into danger and Mark does everything he could to save the love of his life.

This was a really interesting read, especially as the story flits from the present to the past when Mark was still the First Citizen's nephew and heir to the Roman Empire that was under Augustus. This serves as a comparison to the present situation Mark finds himself in from wedding preparations to how the unexpected can affect his life.

What I really liked was how light this read. This is a mystery thriller and the romance between Mark and Vinnie are treated more like a backdrop to the search for the elusive sword. However as the surprises escalates, this romance becomes the core to who Mark is.

For those who like vampires and angels and blood and gore, this is quite the interesting read and keeps you on your toes to the bitter end.

Until the next book, that is.