International Bestselling Author Mary Ting/M. Clarke resides in Southern California with her husband and two children. She enjoys oil painting and making jewelry. Writing her first novel, Crossroads Saga, happened by chance. It was a way to grieve the death of her beloved grandmother, and inspired by a dream she once had as a young girl. When she started reading new adult novels, she fell in love with the genre. It was the reason she had to write one-Something Great. Why the pen name, M Clarke? She tours with Magic Johnson Foundation to promote literacy and her children's chapter book-No Bullies Allowed. 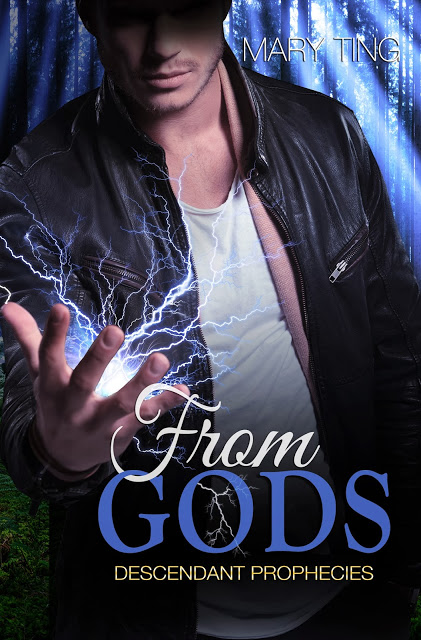 
Did you just see a flash of lightning across the sky on a clear sunny day? It’s not from Mother Nature. It is most likely from Mason Grand, swoon-worthy demigod, one of Zeus’s descendants.
Skylar Rome is supposed to be having the best summer ever before she heads off to college. Little did she know, her whole life was about to change while visiting her cousin. Nearly drowning at the beach due to unknown forces, one of the Grand brothers she’d just met, Mason, saves her life. Cool, collected, mysterious, and dangerously good-looking, Skylar is drawn to him from the start. Though she knows he is the type of guy good girls stayed away from, it seems he is always saving her life, and the attraction was inevitable.
Upon meeting the brothers, strange things begin to happen. When she accidentally kills one of the brothers, it throws her life into turmoil, as they search to find the answers. Implausibly, she gets caught up in a world of the decedents of ancient gods, all who have super powers. Not only is her discovery difficult to accept, evil beings are after her. Running out of time and running for her life, she must unravel a mystery. What do they want from her? Forced into a battle set into motion long before she was born, will she find the answers, or will she die trying?

One of the dangers of basing a story like From Gods on classics like Greek mythology is that there may not be enough wiggle room for originality. But while I could see vestiges of modern variations in the storyline, by the time I read about 30% of the novel, I stopped comparing and completely lost myself in Mary Ting's fantasy world.

Skylar has had a painful, yet ordinary, life. Abandoned by her father as a child, she strives to be unnoticeable so she doesn't get hurt again. There are a few people that are close to her, like her cousin Kayla and her Aunt Kelly who she visits every summer. This vacation after her high school graduation is to be a special one filled with pure fun before the drudgery of college.

It became more than she'd thought when she and Kayla meet the Grand brothers and forces from beyond the normal start threatening her life. All she knows is she's never encountered anything like that before and Mason is always there to save her and keep her safe. Then, one of his brothers accidentally dies in an inexplicable way, causing all hell to break lose. Who can she trust? Mason? Or not?

Can the gods die? If beings are only real because of belief, then yes, they can. That is one of the problems plaguing Skylar, since she's caught in the middle of a battle of siblings launched thousands of years ago.  The demigods are alive only because the gods mated with humans to ensure their bloodlines. But something, or someone, wants them all gone. And those things are after Skylar, too.

As far as she knows, she's ordinary, and very human. But somehow these vultures don't see it that way, and neither do the Grands. Unfortunately (or not!), nobody is sure what she is at all.

Reality and mythology morph into one before her unbelieving eyes and she's forced to accept what her life has turned into. The only bright spot in her nightmare is that Mason, rude and unfriendly as he is, is also part of her new reality.

The way it's written, the Descendant Prophecies could well become the next YA/NA go-to fantasy series. Boring parts are non-existent, there's that right mix of blood, gore, and action, and mythology buffs won't have that much of a bone to pick, either. What got me was the part describing the crossing of the river Styx. While it wasn't named, the setting was quite like Orpheus' descent itself. I just missed the two pieces of gold and the boatman, but most everything was spot on.

The questionable character for me was the Oracle. I think she's one of the Fates? She's certainly portrayed as one. I don't get her connection with the plot surrounding Skylar; I hope it becomes clearer in the next book. Then, if Skylar is who they think she is, why are vultures and sea monsters after her? And her father? Exactly what is he, Mary Ting? I hope I can get my hands on the book that comes after From Gods soon for my answers. 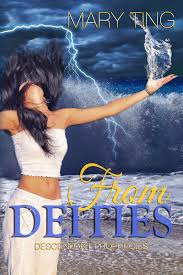 SIGNED PAPERBACK OF FROM GODS & SWAG