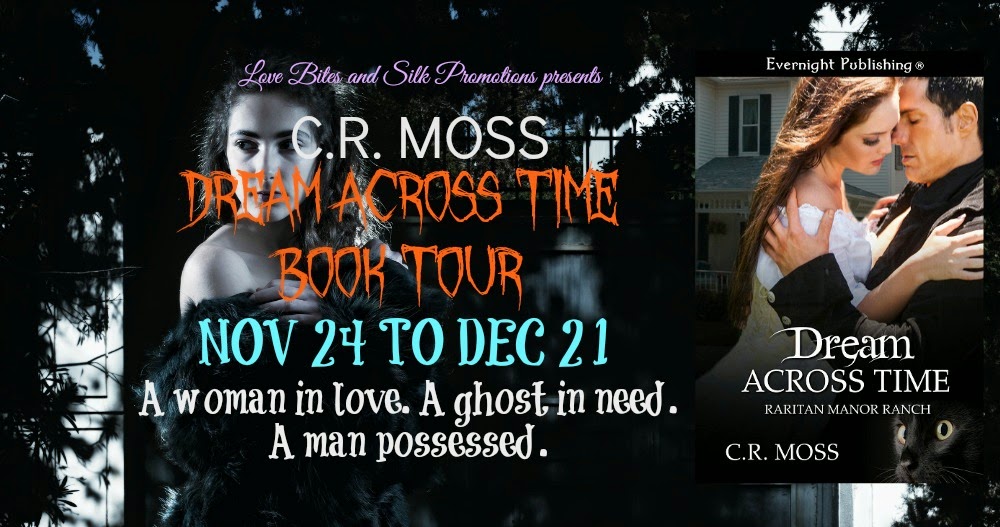 An eccentric and eclectic writer, C.R. Moss pens stories for the mainstream and erotic romance markets, giving readers Worlds of Possibilities.More about C.R. Moss:  So what does she write? She writes stories from the light and sweet to the dark and deadly with varying degrees of sexual heat. Writing as C.R. Moss gives her and her muses the freedom to explore worlds of possibilities when it comes to love. And where does the tag line “Love & Lust in the Wild West” fit in? Well, for one, she lives in NV. Two, her stories take place, either in part or in full, in and around the Las Vegas area. In fact, even this website sports “a look of home.” The background picture was taken in an area just a few miles west of Las Vegas and happens to be the inspiration for the setting of the Double D Ranch Tales saga.She also has a passion for penning dark fiction. Writing under the name Casey Moss allows her to slate other stories under Horror ~ Paranormal ~ Suspense ~ Thriller ~ UrbanFantasy.  Visit: http://caseymossbooks.com/ 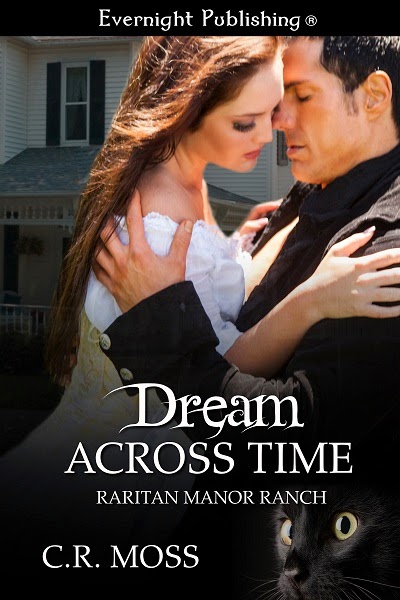 Dream Across Time
by +C.R. Moss

A woman in love. A ghost in need. A man possessed.Evelyn Sheridan is in love with Raritan Manor Ranch’s resident ghost, Quinn, but can only experience his embrace in her dreams.Quinn VanAlder, who doesn’t realize he’s a ghost, loves Eve and wishes she’d stop saying they can’t be together.While at the ranch, Alex VanAlder arrives for a visit, and Evelyn’s hopes rise. Perhaps she will be able to have a real relationship after all. Alex, though, has no interest in Evelyn. Yet, every time the house cat, Myrddin, comes around, Alex feels like a man possessed and wants Eve with a passion.Caught between loving a ghost and putting up with a man who can’t make up his mind, Evelyn is at a loss. Can the magic of the ranch help Evelyn to stop being caught between two worlds?

A woman in love. A ghost in need. A man possessed.

Evelyn Sheridan is in love with Raritan Manor Ranch’s resident ghost, Quinn, but can only experience his embrace in her dreams.

Quinn VanAlder, who doesn’t realize he’s a ghost, loves Eve and wishes she’d stop saying they can’t be together.

While at the ranch, Alex VanAlder arrives for a visit, and Evelyn’s hopes rise. Perhaps she will be able to have a real relationship after all. Alex, though, has no interest in Evelyn. Yet, every time the house cat, Myrddin, comes around, Alex feels like a man possessed and wants Eve with a passion.

Caught between loving a ghost and putting up with a man who can’t make up his mind, Evelyn is at a loss. Can the magic of the ranch help Evelyn to stop being caught between two worlds?


C.R. Moss explores an interesting problem in Dream Across Time. Sometimes a dream can be so vivid that it seems to be real. But they're just your thoughts being voiced by your imagination, right? Aren't they?

Evelyn had been dreaming of a man for as long as she could remember. He's the most perfect, sweetest, kindest gentleman and he's spoiled her for every real man she's ever met. No one can come up to the standards he'd set. Of course they can't, because they're ones she made up in her mind. And it's highly unlikely that she could find a flesh and blood man that can come close to him.

Quinn is her imaginary everything. A friend and mentor when she was younger, he's gradually becoming ardent lover as she ages. The changes make sense, she's getting older, and her wants are maturing.

When she's graduated from college, though, she realizes she has to grow up and leave her imaginings behind. A change of place seems to be the most logical move and she accepts the invitation of her best friend Julie to spend time at their family ranch.

The trouble is, the ranch seems very familiar and there's a portrait of a VanAlder hanging in the house who looks eerily like Quinn - and is named Quinn, too. It's completely illogical since he'd died centuries ago. Could it be that Evelyn was dreaming of Quinn's doppelgänger descendant Alex instead?

Alex had never met Evelyn before but can't deny that he's attracted to her. Sometimes. At other times, he seems to be a whole other person who thinks he's been had. And then there's that strange feeling he gets whenever Myrddin is near.

It's a puzzle that's about to be solved by a VanAlder cousin Cassandra and her familiar, Myrddin the cat. Can love indeed transcend time?

While not a very heavy bit of writing, there is still quite a bit of substance to this story. Not many people accept that there is something supernatural in their lives. If it's not tangible, then it can't exist. But there is so much that can't be logically explained! Dreams, paranormal happenings, and existential beings are just a few things that tend to defy the logical mind and they're inexplicable enough that whoever experiences them are afraid they'd be labelled crazy.

This was something really compelling for me and I have no bones to pick with it - except for one thing. Alex. Why did he concede so easily? I would think he would fight a little more, have more of a struggle against his present reality. That was completely unlike the character I expected so it left me a tad disappointed.


All in all, Dream Across Time is a story a lot more sweet than it is scary. Seeing it's the first of a new series, I hope C.R. Moss still touches on the development of this new/old relationship of Evelyn and her dream man. Nope, I'm not saying who is real and who she ends up with! Gotta leave some suspense in here... It's a ghost story, after all. 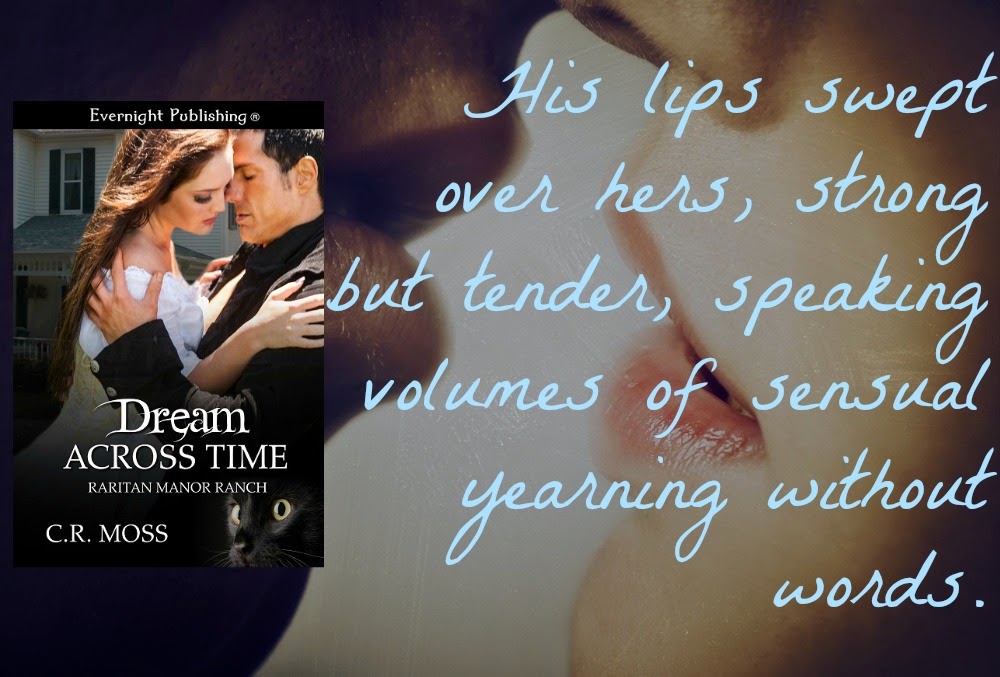 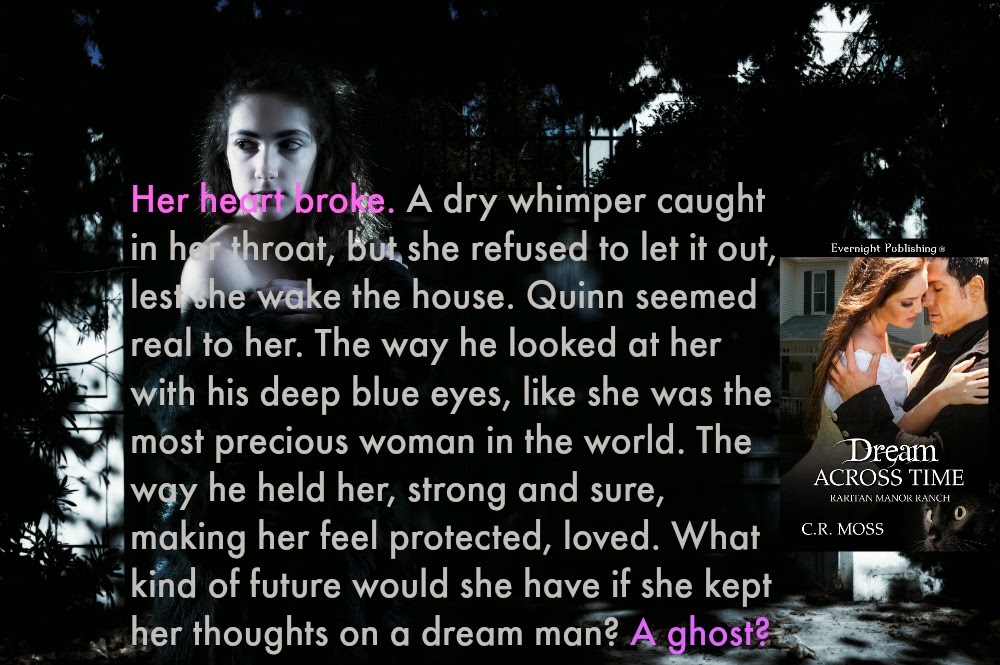 Adult Excerpt for Dream Across Time by C.R. Moss
Evelyn allowed him to lay her down on the hay and didn’t protest when he lifted her top. Enraptured by the heady sensations of his kisses on her bare skin, she lost track of the world around her. Before she knew it, her clothes were off and discarded. She lay naked and submitted to his apprising contemplation.
His gaze, smoldering with sexual hunger, followed the path his hands made down her shoulders to her breasts. Warm palms massaged her mounds, then moved on, exploring her body, caressing her down to her toes. Waves of desire rolled through her.
Quinn’s lips trailed over her body, tracing the course his hands had. His kisses began with each foot, then coursed up her skin, sweetly kissing her navel before traveling up. When he reached her breasts again, he outlined each rosy peak with the tip of his tongue.
Gasping in sweet pleasure, she arched her back, inviting him to take her fully. He understood the willing invitation and suckled on one nipple, then the other as his hands resumed their discovery of her body and slipped between her legs. His touches sent shivers of delight through her that ebbed and flamed with each of his movements.
Evelyn, never feeling such pure and explosive pleasure before, reveled in the euphoria coursing through her. She yearned for more and shifted so he could access her easier.
He stopped, breathing in heavy pants. “My sweet, innocent Evelyn, I have waited so long for this, but I shall stop if you want me to.”
“What do you mean, stop?” her sultry voice questioned.
Quinn lay on top of her and kissed her. His body fit hers perfectly, and his cock pushed at her through his pants. That’s when she understood. An aching need she never felt before brewed within her. Returning his kiss with just as much force, she put her hands between their bodies.
“Evelyn?” Quinn propped himself up on his elbows.
She didn’t respond. Her desires had taken over. She worked quickly to remove his shirt, exposing his hairless, smooth and soft chest and abdomen. He quivered when her fingers traced his muscles. She leaned up and gave his pectoral a quick kiss.
“Evelyn, does this mean…?”
“Yes.” She pulled him down to her, taking his mouth with demanding command. She sensed the thrill of his arousal once he removed his pants. Their bodies entwined, skin to skin, woman to man. She needed more.