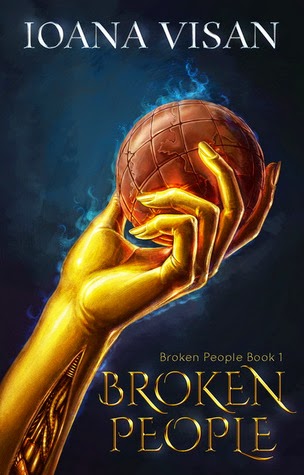 Don’t be shy and come inside! The Nightingale is waiting to take flight! Welcome to The Nightingale Circus! Listen to the singer with an enchanting voice. Watch the knife throwers who are also prosthetic builders. Here is a telecharger on the run and a ballerina with no lungs. There is a broken pole dancer and an Asian bot. You’ll be amazed by a regular girl who becomes exquisite and frightening at the same time.They’re better known as the famous Nightingale, the Blade Masters, the Magician, the Swan, the Firebird, the Rocket Girl, and the Golden Lady.
They are all waiting to tell you their story about how they came to the circus and why they stayed.
This is a companion short story collection to Broken People.

Review by Ramona
My Rating: 4 out of 4 Stars
(Based on Short&Light Read Category)

If, like me, you simply read the blurb of The Nightingale Circus Collection, you'd wonder exactly what Ioana Visan was thinking when she penned these stories! But, taking a hint from the first sentence not to be shy, I dove in and was extremely and pleasantly surprised. This isn't any sort of fluffy set of fairy tales, but they are written in the manner of the originals of Grimm and company. They're bloody, and gritty, and very, very interesting. I shouldn't have been so surprised, though, since I had already read The Impaler Legacy and the style of narration is the same - simple and gory, yet strangely elegant.

This is a companion set to Broken People, meaning that it is an in-depth look at the important characters of the main story. A how-this-came-to-be, as it were.

The Nightingale Circus isn't just a traveling entertainment show, it's a refuge for people who are broken, literally, and would have otherwise no use in society and so were thrown away. They might look normal on the outside but they're patched up and held together on the inside. Neither is it just simple thread or bolts holding them together but top of the line prosthetics that would normally be found in research labs or in the military. Big Dino, the circus boss, can make anybody almost normal - if the price is right. It may seem mercenary, but materials are scarce and the circus people have to eat, somehow.

Set in the dystopian world at war, with bots and telechargers doing all the fighting, life isn't just hard with supplies running low, but also dangerous because of unexpected bombings and battles. Everyday things (and prosthetic equipment) have to be scrabbled out of dumps and landfills. People have hardly any medicines left, necessitating desperate attempts to heal their families. Since the circus also deals with healing, in a way, the dangers are doubled for the performers.

Each member of this unique group has a gift - and a dark secret. They weren't supposed to survive what life had previously dealt them and were now in hiding or on the run. And each brings something special to the circus that makes it perform that much better. Yet, despite all the threats leveled against them, they still manage to have compassion for those in need; that's what makes these short stories tick.

The Nightingale Circus Collection should serve as an appetizer of what Ioana Visan has to offer an adventurous reader. Like a circus itself, you'll never know what you'll find until you dare to step inside!