K.A. Merikan is a joint project of Kat and Agnes Merikan, who jokingly claim to share one mind. They finish each other's sentences and simultaneously come up with the same ideas. Kat and Agnes enjoy writing various kinds of stories, from light-hearted romance to thrillers. They love creating characters that are not easy to classify as good or evil, and firmly believe that even some villains deserve their happy endings. It is easiest to find them in galleries, good restaurants and historical sites, always with a computer or notebook, because for Kat and Agnes, every day is writing day. Future plans include lots of travel and a villa on the coast of Italy or a flat in Paris where they could retire after yet another crazy venture, only to write more hot homoerotic stories.

Kat and Agnes started as popular authors of online serials written in their native language, but are now focused on reaching a wider readership by writing in English. As K.A. Merikan, they have published a number of books, which cross genres while always staying homoerotic. 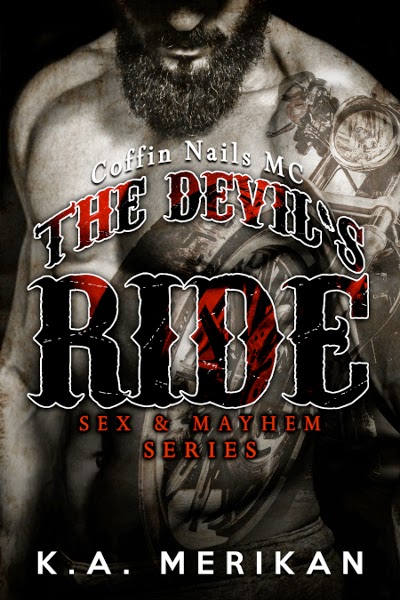 Tooth. Vice President of the Coffin Nails Motorcycle Club. On a neverending quest for vengeance. The last thing he needs is becoming a permanent babysitter for a male hooker.


After a childhood filled with neglect and abuse, followed by his mother’s suicide, Lucifer set out into the world alone. There was nothing for him out there other than taking it one day at a time. As the bastard son of the Coffin Nails club president, Lucifer never got much fatherly love. So when the Nails show up at the strip joint Lucifer works in, the last thing he expects is to be put in the custody of Tooth, the Nails Vice President famous for his gruesome interrogation techniques. The man proves to be the sexiest beast Lucifer has ever met. He’s also older, straight, and an itch Luci can’t ever scratch.


Tooth’s life came to a halt twelve years ago. His lover got brutally murdered, police never found the perpetrators, and all leads were dead ends. To find peace and his own justice, Tooth joined the Coffin Nails, but years on, he’s gotten nowhere with the case, yet still lives on with the burning fire for revenge.

Babysitting a deeply scarred teenager with a talent for disappearing is the last thing on his bucket list. He promised himself to never get attached to someone like him again. To make sure the openly gay boy is safe in the clubhouse, Tooth is stuck keeping an eye on him. The big, blue, attention seeking gaze is drawing Tooth in, but fucking the president’s son is a complete no-go, even when both their feelings go beyond lust.


What Tooth doesn’t know is that Lucifer might hold the key to the closure Tooth so desperately needs.


Review by multitaskingmomma
My Rating: 4.5 of 5 Stars

When authors KA Merikan stated they loved to create difficult to classify characters, I think they meant it when it came to  Tooth, the VP of the Coffin Nails MC. And it's not because of his gold tooth, either.

Tooth has a mission. He had lost his lover long ago because of some illegal activities that are too horrifying to tell. Or spoil, in this case. The loss spurs him on to find the killers, the mutilators and to exact vengeance on them. Unfortunately, he never did find them but his search had led him into the welcoming arms of Priest, the MC president. Now as VP, he is the right hand man and the main man expected to deal with disciplining those under their protection. Or not.

Lucifer, or Luci, is Priest's by blow son. Raised by an overly depressive mother, basically neglected by his father, he ran around trying to do his best until he comes home one day to find the body of his mother. Unfortunately, he never got any support from anyone so he went on with his life doing whatever he could to survive. Working as a lap dancer in one of the clubs under the Coffin Nails territory, he thought he was safe until someone disappeared, the bikers ride in, and he looks up to see his father. And gets assigned to Tooth for watching, babysitting, and disciplining. As their relationship develops, the mysterious deaths around them are pointing to Luci as key. Now Tooth has to make sure that Luci remains safe.

This is a biker story and even if it is written purely for reading entertainment, it is a tough read containing some might tough scenes that may affect some sensitive readers. For one thing, there is spanking of a bratty child. Another, there is the insinuation of using lactose intolerance as a form of punishment to a wayward biker. And lastly, think: Vengeance is mine sayeth Tooth.

So if you are looking for some fluffy romance novel with supposed tough characters going all cheesy on you, you won't find it with Tooth. This is a tough novel with tough characters living a very tough life barely skirting the law. They are men and they know it. And when they're bad, well, they are really bad.

As for entertainment, this is top notch!

More information about ongoing projects, works in progress and publishing at: