eARC Review: Diary of a Teenage Taxidermist by KA Merikan 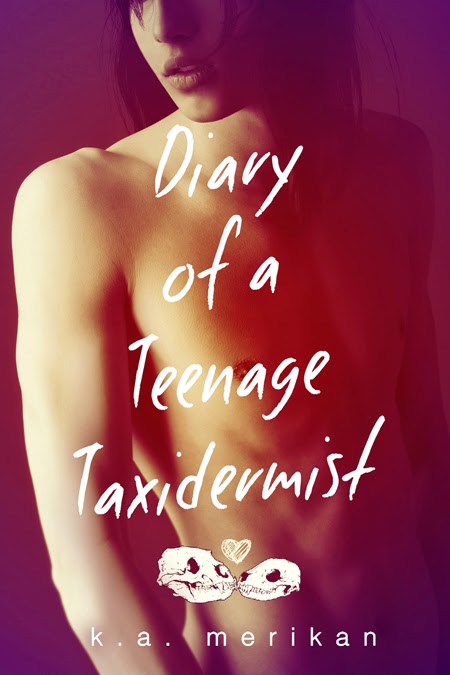 --- Too cool for school. ---Ethan is a levelheaded, some might say ‘antisocial’, young artist-entrepreneur with a love for quirky taxidermy. He is close to graduating high school and at a crossroads. All he wants is to develop his business further, yet all his parents want is for him to go to law school. That is more than enough problems for Ethan, so any kind of love life is off his agenda. That is until Robert Hunter, the quarterback of the football team, comes crashing into him. Literally. Robert drifts along in high school. He has good grades, he’s getting ready for med school, he’s even leaving potentially problematic dating until college. He’s gay, not ashamed of it, but he doesn’t want to stir up any trouble. His carefully laid plans might just go completely off the rails though, when he drinks too much at a party and causes irreversible damage to Ethan, the school’s weirdo. Robert has to face the fact that maybe he isn’t the good guy he always considered himself to be. And maybe he doesn’t want to go to med school. And maybe, just maybe, he doesn’t actually want to wait with dating until college.

So, I got this copy to review from the authors themselves but was frankly too hesitant to read. I mean, who gets thrilled reading a title with such a taboo word: taxidermist.

To add insult to my sensibilities, I was watching The Blacklist and there was this episode about one. Humans and animals stuffed. Eww! truly gross. Then I read The Devil's Ride and remembered: this is written by two authors who I love and have never disappointed. So I took courage and read.

Whoa! This was incredibly sweet! Strange. But sweet.

Ethan is what young people these days call Goth but really, he does not even look it save for the bird necklace hanging from his neck. Yes, the birds were alive once, now they are eternally stuffed thanks to formaldehyde. You see, Ethan is a taxidermist. No, not of humans ~ of rats and birds.

Don't get grossed out! Take a turn of the page and read!

Then there is Robert, the jock. He is set to become a doctor. But he let his peers make him do things he knew were wrong. The wrong push and BAM! Not spoiling anything, but Robert ends up saving Ethan's life and now is keeping a secret he does not want even to think about.

Through all the aromatic scents that just speaks 'preservation,' there is a real love story going on here. A K.A. Merikan story that is different, blunt, quirky and strange. I really, really enjoyed this read!