eARC Review: Him for the Holidays by Jaxx Steele

My writings are a combination of some things that I have learned over the years, good and bad,mixed up with a lot of imagination. I can only hope that you like what you read.
I was born and raised in Brooklyn, New York, but I escaped and I now live in Indiana. My dream is to buy a house near the beach and write all day and make enough money to live off it. I spend most of my time working a nine to five and traveling, when I can, to new and wondrous places that I can incorporate in to my stories (or that will at least spark ideas for me). I do have love in my life thanks to my life partner, Hou, and our cat, Judo, who graciously lets us live with him in his house. So, all in all, I have a full and happy life.
You can follow Jaxx on Twitter 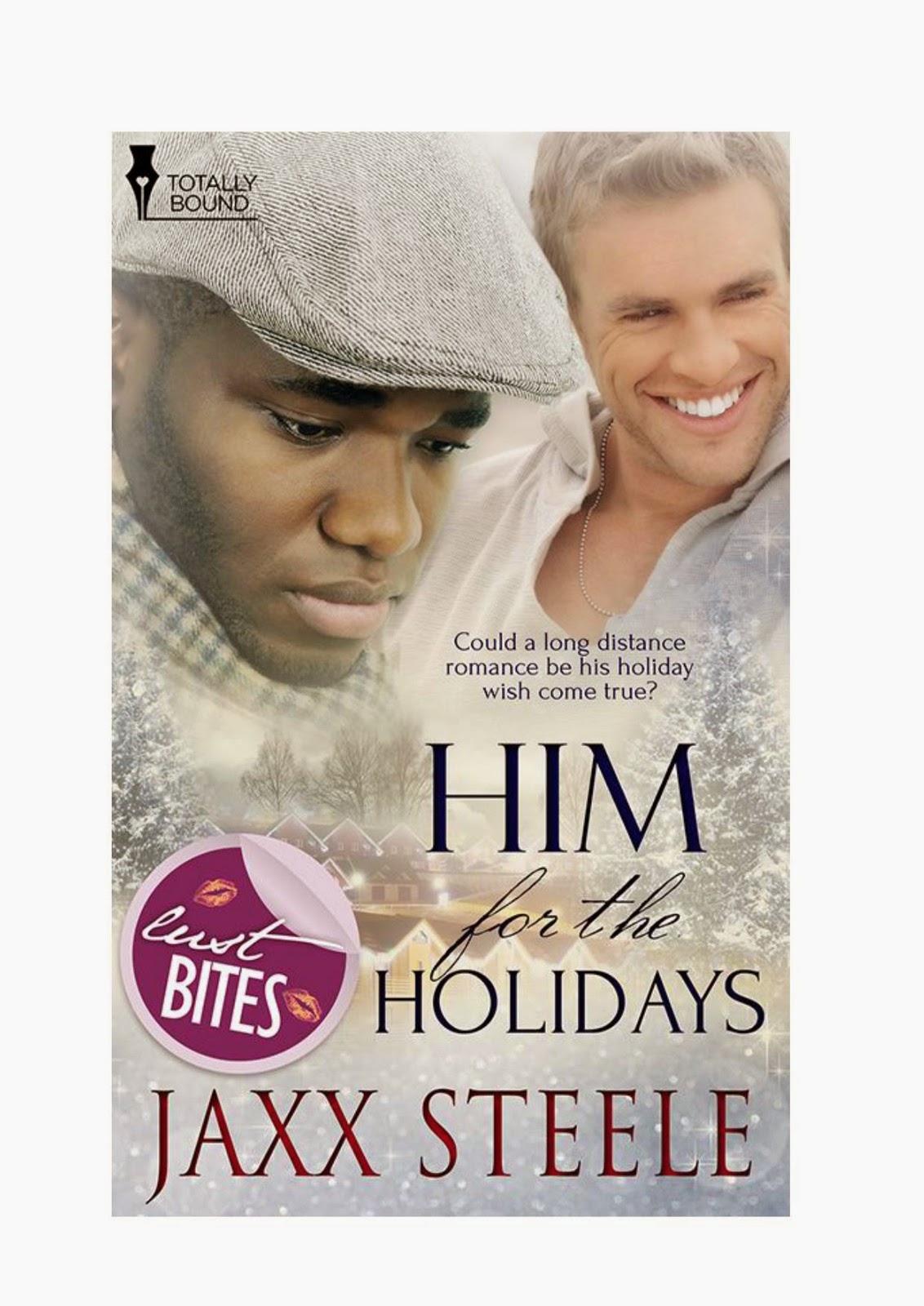 Don meets Trevor when he goes home for the holidays. Could a long distance romance be his holiday wish come true?
Donald Bradley is home for the holidays. While running an errand for his mother, he meets Trevor Oxford, who is everything Don could ask for in a man. However, Don does not intend to have any type of relationship with him. Trevor lives and works in the small town and Don lives two hundred miles away in the city. Trevor is confident and aggressive in his pursuit of Don, who is confused by Trevor’s attentiveness. Don wants to run away from Trevor and run to him at the same time.Could a long distance romance be just what Don needs to start the New Year? Will Don accept what Trevor has to offer, giving him what he really wants this holiday season?

Publisher's Note: This book was previously published elsewhere. It has been revised and re-edited for release with Totally Bound Publishing.

By reading any further, you are stating that you are 18 years of age, or over. If you are under the age of 18, it is necessary to exit this site.
Copyright © Jaxx Steele 2015. All Rights Reserved, Total-E-Ntwined Limited, T/A Totally Bound Publishing.

Donald lay in bed watching the snow fall past the window across the room. He positioned his hands under his head and groaned.
“One, two, thr—”
“Donald! It’s snowing again! Do you need to go back out and clean the front walk off?”
He shook his head when his mother’s voice trailed down the hall to him.
“No, Ma! It hasn’t even been an hour since I shoveled the last time. It’s good for a while.”
“Okay!”
He waited a few minutes then closed his eyes.
“Donald, are you hungry?” his mother shouted. “I’m making lunch.”
He sighed. “No, Ma. I’m fine!”
It had been a while since Donald had stayed in his old room for a long visit. Usually when he came back to his parents’ house, it was only for a weekend a few times a year. For this visit, he would stay the whole month of December waiting on repairs to his apartment from a recent storm. Donald had moved out years ago when he’d left for college, but his room remained unchanged. Pictures of him as a boy still hung in their places on the walls, but the desk he used to do his homework on now held his laptop. It was relaxing, familiar and comforting… Home. With a sigh, he finally closed his eyes again.
“Donald!”
He blew out a frustrated breath. “Yes, Mother?”
“What are you doing in there?”
“I’m trying to take a nap, Ma. Do you need something?”
“No, honey. Go ahead and take your nap.”
After several minutes, Donald let his eyelids shut. His breathing evened and he relaxed into the pillow.
When he opened his eyes again, he found himself reclining on a beach. The heat of the midday sun warmed his skin. Donald crossed his bare legs and raised his arms over his head to stretch out, then he exhaled. He widened his smile as he checked out his surroundings. Three muscular guys in Speedos played volleyball just a few feet away. They paused in their game to smile back at him. He waved.
“You’re a sexy blond. Why don’t you join me?” Donald called.
The man and his friends ditched the ball and walked toward him. Two of the men stood behind Donald while the blond he’d called over sat on the lounge chair with him. Everyone touched him at once—his face, his chest and his cock. Donald closed his eyes and someone kissed him. The smoldering kiss awakened his dormant endorphins—hot, insistent and incredible. He had never been kissed like that before.
The blond man pinched one of Donald’s nipples while someone else sucked the other until they were ultra-sensitive pebbles. Someone stroked his dick through his shorts. Someone else played with his balls. His cock grew under their skilled hands, then the handsome man abruptly yanked his shorts off him. Donald gasped.
The third man, an attractive redhead, turned Don’s face, breaking the kiss only to take his mouth again. Donald panted into the new kiss, barely able to catch his breath. The redhead ran his fingers over Donald’s hair as he pushed Donald’s lips apart with his tongue. Battling for domination, the blond man pushed the flame-haired man away and regained control of the kiss, sucking on Donald’s tongue and pulling him closer. Donald’s heart pounded so hard it actually hurt in his chest. He was having a heart attack—he just knew it—but Donald prayed the men wouldn’t stop pleasuring him. His pending orgasm would be worth dying for. The third man used his hot, aggressive mouth to take Donald’s breath away, then he released Donald but only for a moment.
The striking ginger looked into his eyes and spoke softly. “Relax, Donald, we’re going to make you feel like you’ve never felt before. Don’t you think it’s about time?”


Review by multitaskingmomma
My Rating: 3 of 4 Stars
(Based on Short&Light Read Category)

This is a very, very short Christmas story about how a man's life gets maneuvered by his well meaning and loving family to get for him the best present they could give him: a life.

Don is back home because his apartment is not ready yet. As he can work from home managing and operating his online dating site, he is okay. The only thing that bugs him is his ma's and sister's need to always push him to do some chores around the house and out of it. Without notice they ask him to do this, do that, and everything else. But Don's a good natured guy, if not a tad overworked, so he goes and does what is asked. One of those trips gets him to meet Trevor Oxford, the new guy in town who had taken over his uncle's shop.

Trevor is a nurse on the side and manages his uncle's shop full time. As he is the only living relative who does give a damn about his uncle's health, he gets willed the business ~ but that is in the future. For now, he just manages not wishing any harm to his beloved uncle. When a chance encounter, or so we think, lands him Don, he is unwilling to let things go.

The chase is on.

There is a problem: once caught, can Don give up his place in the city and stay in the small town?

This was an interesting read at best, but it's such a short story that when I reached the end, it left me wanting to know more about the two men's futures. I also wanted some answers left hanging out there for me to still discover.

I see this as a prelude of a bigger story and I just hope that now Jaxx Steele has whetted my appetite for Don and Trevor, she could give me the answers I really want. Like, yesterday, now, this second.... crossing fingers here.