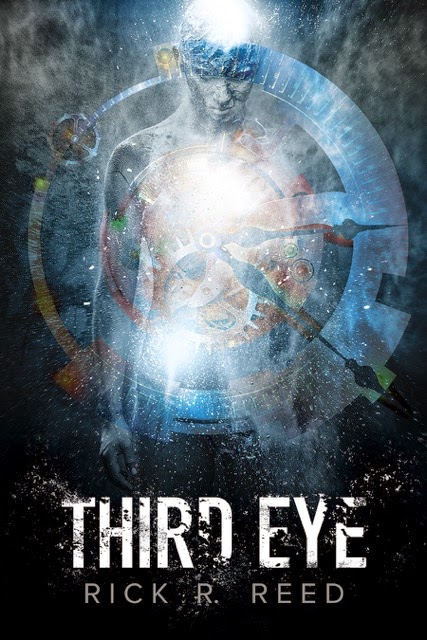 Who knew that a summer thunderstorm and his lost little boy would conspire to change single dad Cayce D’Amico’s life in an instant? With Luke missing, Cayce ventures into the woods near their house to find his son, only to have lightning strike a tree near him, sending a branch down on his head. When he awakens the next day in the hospital, he discovers he has been blessed or cursed—he isn't sure which—with psychic ability. Along with unfathomable glimpses into the lives of those around him, he’s getting visions of a missing teenage girl.
When a second girl disappears soon after the first, Cayce realizes his visions are leading him to their grisly fates. Cayce wants to help, but no one believes him. The police are suspicious. The press wants to exploit him. And the girls' parents have mixed feelings about the young man with the "third eye."   Cayce turns to local reporter Dave Newton and, while searching for clues to the string of disappearances and possible murders, a spark ignites between the two. Little do they know that nearby, another couple—dark and murderous—are plotting more crimes and wondering how to silence the man who knows too much about them.

I have always felt that author Rick Reed is one of the best when it comes to suspense filled novels, no matter the genre. Truth be told, he has some books I have bought but never opened because the plot absolutely terrified me. Though now I see it as a challenge to finally do so for I am in my horror-stories-mode.

Going back to Third Eye, this is one of the good ones by this author. For the suspense, not really on romance. So I am tagging this as Gay Fiction rather than Gay Romance. This is a horrifying story that unfortunately, is too common for comfort.

A serial killer on the loose. A partner in crime who gets recruited without knowing it. Children taken then dumped off the side of someplace. It is just too common a theme seen on television so reading about it in the Reed style makes it even more terrifying. The twist is in Cayce's character who gets into something he never even thought of.

It only took one blow to the head and Cayce's life is changed. Searching for his wayward son, a tree falls on his head after lightning struck it and when he wakes up, he sees things. He touches the hand of a doctor and he sees the life of that man. He touches a newpaper and knows what's in it. He sleeps and he dreams of murder of the innocents... and some of it involves his son. Now if that is not enough to send anyone on the spinning end, I don't know what does!

Dave Newton is a reporter and he had started writing about missing children in their community. While on the search for more clues to the developing story, he meets Cayce and they connect, somewhat. No insta lust, just a trusting between two.

The story really evolves around Cayce and his connection to the serial killings and this is the tale that I got totally absorbed in. I constantly found myself fidgeting reading this part for it was uncomfortable to read the thoughts of such an insane character bringing logic into his schizophrenic mind with actions that involved children. It is a violent mind. It is a broken mind. What made it so bad? Because the thoughts and actions - Cayce could see them, could feel them. Both the killer's and the poor children. And Cayce's son is involved.

This is gay fiction and it is suspense filled and horrifying. Entertainment wise, this is one I would consider a favorite. Those who are seeking cheesy romance, step back, but do give this a closer look for it is one of the author's best.