Meredith Russell lives in the heart of England. An avid fan of many story genres, she enjoys nothing less than a happy ending. She believes in heroes and romance and strives to reflect this in her writing. Sharing her imagination and passion for stories and characters is a dream Meredith is excited to turn into reality. 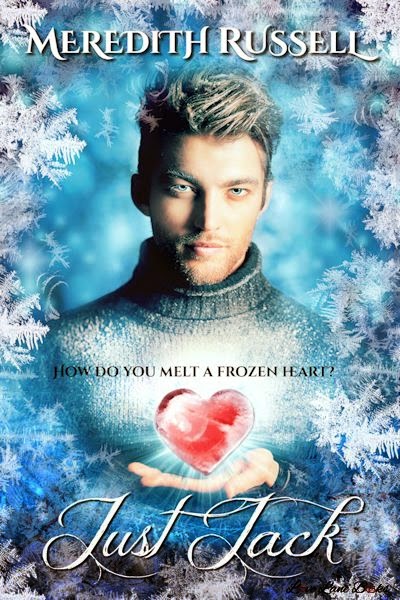 When the line between fairy tales and magic, and the real world become blurred, can love really conquer anything?Leo Marsh is having a bad day. He just caught his boyfriend cheating on him, and not for the first time, then he falls, quite literally, for a man who has to be too good to be true....When Leo slips and falls on some ice in front of Jack, Jack sees something all too familiar in Leo's eyes. For over fifty years, Jack has existed in a solitary life of ice and bitterness. Just like Leo, he was betrayed by a man he loved, and swore no one would ever break his heart again: he gave up on love, and it seemed love had given up on him.But if by fate or magic, Jack and Leo find their paths crossing for a second time, and with a little guidance from friends, dare to take a chance on each other. The problem is, Jack isn't the charming and uncomplicated guy Leo thinks he is. When Jack gave away his ability to love, he became something else, someone cold and unloving. He became Jack Frost.As Jack and Leo get closer, Jack is left torn and confused. Jack yearns for anything that reminds him of his humanity, but the truth is, he feels nothing, not warmth, not love, and he knows he might never be able to love Leo the way he deserves to be loved.

One of my favorite supernatural characters is Jack Frost, especially as he personifies the naughtiness in all of us. I love him because he is such a sad character despite all his antics and tricks that can make those of us who understand, laugh. His is a cold heart, not because of his own choice, but because of his circumstance. In the film Rise of the Guardians, he is portrayed as a young boy, maybe because the plot centered on children. Jack is Jack. He is neither young nor old. He is Just Jack.

Leo is a toy maker and he loves games and animation. Walking into his boss and lover with another man brought his warm heart into the cold of betrayal and it hurt him deeply. As he walks out on the relationship with a finality, he falls victim to a trickster making him fall, hit his head, and wake up to the beautiful face of a man called Jack. When Jack and Leo hook up, they have fun, they have love and the cold heart that has Jack in grips begins to thaw while that of Leo, the one that felt betrayal, began to open once more.

Meredith Russell unexpectedly gave me who Jack could be and because of the way she wrote him, I fell in love with his character even more. In her twist to the character, there are multiple Jack Frosts around the world and each have their own territory so to speak and they all hold control over the winter there, even if nature does at times twist things around them. In this story, Jack's cold heart, the unfeeling heart that spurs him on to play tricks on others, begins to thaw. This thawing is because he falls in love with a mortal.

This was such a sweet sweet story and I found myself really wanting more. The thawing of Jack's frost is, for me, the only way to go. The manner of which it thawed, now that was the sweet romance I so needed to read today.

Excerpt
Cramming his hands in his jacket pockets, Jack looked at the ground, and with the toe of his boot, he drew a circle in the snow. Adding eyes and a smile, Jack admired his masterpiece for a moment. It wasn’t quite right. He crouched and held his hand over the simple drawing. Slowly, he pulled back his hand. The soft flakes quivered. He teased the snow, rearranging the picture, then straightened up. The image’s smile was gone, replaced with a frown.
“Hello, Jack,” he said to the drawn face.
With a heavy sigh, he dragged his foot across the image, wiping the sidewalk clear. If only it was that easy to wipe away the morose feeling from inside him.
He rubbed a hand over his face and took a deep breath. There was a smile on his lips as he looked ahead at the elderly gentleman making his way toward him.
“Too cruel?” he asked himself.
Maybe. Jack smiled. Or maybe not. He wiggled his fingers and felt the cold air surge between them. This was who he was—the bringer of mishaps, ice, and mischief, and of the frost on the window panes.
He was Jack Frost.
Giveaway
Win $15 giftcard from Amazon or ARe, and two other prizes of free ebooks

Posted by multitaskingmomma at 9:23 AM