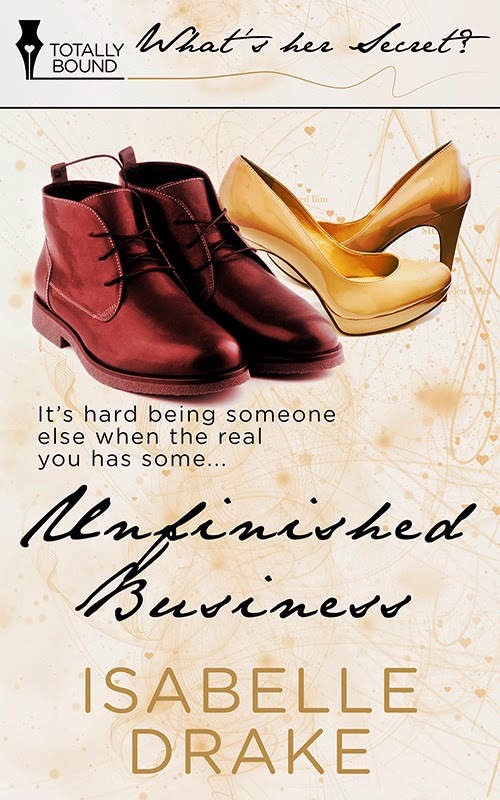 She ran away from the town that wouldn’t forget, to a city that doesn’t forgive, right into the arms of the guy who insists she set things right.Less than a year ago, Hayley Jones made a scandalous decision that sent her packing. She left her country hometown, moved to the city and made a new life for herself. But it’s hard being someone else when the real you has some unfinished business.Hayley knows taking care of the unresolved piece of her past could stir up more trouble and humiliation, so she dodges the truth and puts her energy into her new friends and job. That strategy works for a short while but people from her past start showing up in her present.Life gets even more complicated when she realizes she’s falling for Nick Noel, a guy who knows she’s running from something, and continually challenges her to be herself. But Hayley is afraid of what will happen if Nick finds out who she really is and what she did back home.

Like the sound of Unfinished Business? Buy it here.

Like most writers, my writing process varies somewhat but there are some patterns. I start writing to get a sense of the characters and setting. I might write the opening of the story, a scene or two from the middle or the end. In the beginning, I write whatever comes to mind, whatever makes the story and characters come alive for me. I keep writing until I get stuck.

When I get stuck I ask myself a couple questions. What does she want? What’s her goal? What does he want? His goal? The best stories have complex characters who desire several things, often these things are conflicted. Like the woman who wants excitement in her sex life but is afraid to trust. Or a guy who wants to commit to the woman he’s in love with but has a job that always puts him in danger.  Once I know what the characters want I can use those goals to give the story shape.

The next ingredient is motivation. Why does she crave excitement in her sex life? Sure, everyone wants excitement. But each character is unique and much of that individuality is expressed in motivation. Does she want excitement because she’s just left a dull but secure romance and wants to know what she’s missing? Or does she want to experience some wild sex because she’s just finished law school and has done nothing but read, write and study for the past couple years? What about him? Does he long to provide for his woman because while growing up he never had a home of his own? Or maybe appreciated his childhood and wants to provide a stable home for future children. The characters’ motivation propels the story forward by causing them to move toward their goals.

Next up, conflict. What’s in the way? There has to be something in the way ‘cause if there isn’t a problem there isn’t really a story. Readers are wonderful people, but, well, they do like to see the characters work hard for that happy ending.

The best conflicts are ones custom designed for the character. That woman who wants hot sex but is afraid to trust? Create a to-die-for hero who gives her a taste of what he has to offer but makes it clear that to get more she has to trust him. Even better, add in an external element that requires her to trust him, to do something she can’t, maybe help her achieve a goal that’s important to her.

For my latest release, Unfinished Business, I followed this process with the addition of incorporating a theme of identity. Using a theme provided an additional layer of shape and meaning to the story.

Hayley, the main character, has left her small hometown and started a new life for herself in the city of Detroit, Michigan. She wants to hide everything about her country past and reinvent herself as a hip city woman. Problem is, she doesn’t really know who is she. Back home, she always did what her family and friends thought she should do, rather than what she wanted to do. So, when she arrives in the city, she doesn’t have much of an idea of who she really is or what she really wants.

The perfect man for her? Nick. A country guy who sees through her city pretenses and encourages her to be herself. His insistence that she accept who she is creates conflict for two reasons. One, the only things she knows about herself, her country past and her part in the scandal, she doesn’t like and two, she doesn’t know how to start in figuring out who she really is.

Hayley’s struggle to accept her past and discover her new self is at the heart of the story. Using Nick as part of the conflict gave me the chance to make sure there is plenty of yummy sex and a satisfying romance. No, getting to the happy ending isn’t easy but who says easy is good?


Enter our competition for the chance to win a copy of Unfinished Business and 3 eBooks from Isabelle Drake’s backlist!

If you've ever wondered what it would have been like if you ended up with your best friend of the opposite sex, and I'm guessing Isabelle Drake must have, then Unfinished Business is a novel that you must read.

There's not really a "When Harry Met Sally" vibe to the book; it's something a bit more real than that classic, coupled with a secret that Hayley doesn't want Nick to find out concerning her past. That very secret is why she moved away in the first place, and months later, nobody in her home town seems to want her to forget it. While it's not lifer threatening in the physical sense, it's enough to have crippled her emotionally on getting over her past and moving on with relationships with any man, maybe even with Nick.

Nick is the best guy friend that any girl could have, especially where Hayley is concerned. He's not pushy or trying to be a charming playboy but treats her in that clueless guy kind of way. She can talk to him about anything and he gives his honest opinions, always with her first in mind. After they become FWB because of Hayley's disastrous dating attempt, he still doesn't push but let's her set the pace. Her only worry becomes: how long will Nick be satisfied with that before he asks for more?

I haven't laughed out loud with a book for a very long time, possibly a couple of months, come to think of it. But Hayley's wrecked train of thought has had me chuckling and face palming a couple of times. Somehow, I recognize the disjointed ideas - it could be me! From seeing an organist and wanting to escape church by becoming Catholic then having lots of children and escaping responsibilities by going to ... church. I did leave out all the side thoughts, yes there's more, because this is just one of her mental conversations that left me shaking my head in disbelief.

When you add in Hayley's friends Rianna and Josie, both with enough drama on their own, her crazy co-workers, and evil boss Caroline, it's a hodgepodge of messy relationships that makes Hayley face the ultimate truth: come clean and move on. How she does it and who pushes her, though, is the best surprise of all.

Unfinished Business is so much like reality that Isabelle Drake will have you matching up the characters in her novel with people you actually know. And I dare you not to find yourself among them! This is a fun, entertaining read which is also a compelling argument why friends would certainly make the best lovers. And now to do something about these unfinished limericks bouncing around in my head...