Contemporary and erotic romance author Kali Cross is a proud Texan. Over the years, she has lived all over the world, having the opportunity to travel to Japan, Australia, and all over the Asia. She recently returned to her home town of Austin, Texas and resides there with her wonderful husband, little girl, and sweet dog. As an avid erotica reader, she loves a sizzling story and enjoys creating them. Her passion is creating new characters, some that fall in love, and others that just fall in heavy-duty lust. But sex is a deal breaker, every one of them has to have scorching hot sex. 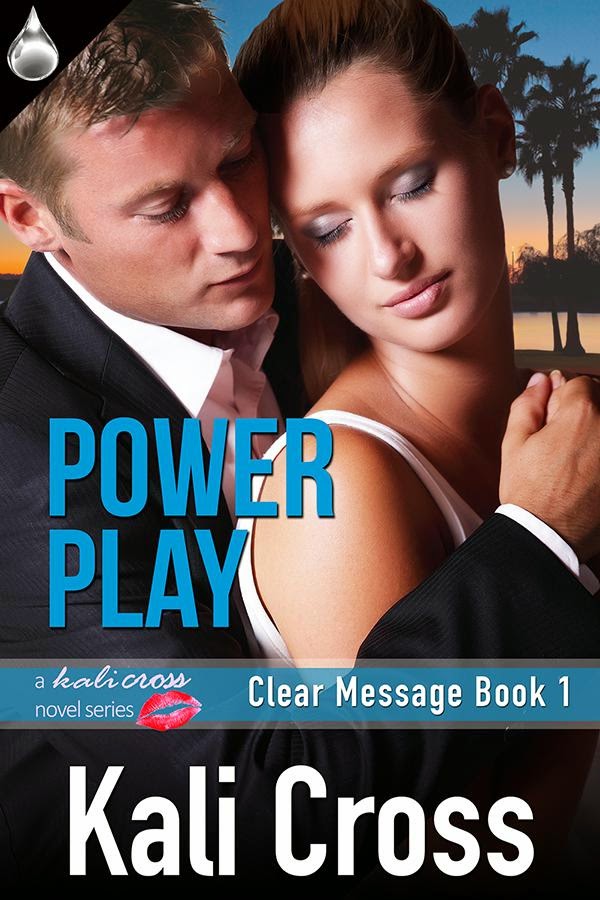 Jack’s up against a master of manipulation—staying one step ahead of his ex-fiancée requires some swift maneuvers. But when Alexandra Simpson enters his life…well, she is a game changer. Dangerous secrets, office intrigue, and sizzling passion will keep you turning the pages of Power Play, Book 1 of Kali Cross’ new romance series, Clear Message.
Jack Schmidt is getting screwed by his fiancée, Vanessa, in more ways than one. After catching her in bed with her trainer, Jack wants her out of his life. Too bad it’s not that easy. As his employee, she parlayed his attraction to the level of fiancée in a matter of months, and in just a few weeks, she’ll own a 20% stake in his firm—and she won’t give it up without a fight. Vanessa thinks she has him by the balls, but Jack’s done being played. He orders a new manager to review all the accounts, suspecting that all Vanessa’s late nights working were spent stroking his clients…and not just their egos.
New manager Alexandra Simpson is the perfect candidate for the job. She’s sharp, loyal to the firm, and doesn’t intimidate easily. Unfortunately, she also intrigues Jack, but getting involved with another employee would be the definition of insanity. Jack wonders if she’s like Vanessa, ready to climb over anyone who gets in her way. But something about Alex forces him to believe otherwise.
After a disagreement over a client leads to a searing kiss, Jack wants nothing more than to lock the door and spend the rest of the day getting to know every inch of Alexandra Simpson. But when Alex hears that he’s engaged to Vanessa, she lets him know in no uncertain terms that she isn’t interested in being the other woman…not again. Not again? Now Jack must go up against Alex’s past, and the result could be deadly for both of them.

If anybody thinks that a corporate takeover is boring, stodgy stuff, they should read what Kali Cross wrote in Clear Message #1, Power Play. The title hints at more than a simple book concerning business though, as the play for power that follows isn't only in the boardroom (although there's some really sexy stuff that happens in there, too) but extends to the bedroom and beyond.

Jack is a self-made, successful business magnate, but when he thought he could finally trust in love and life again, he finds he's been played and he may have no way out. His fiancée thinks she can dictate him and take control of his advertising company. But something is definitely not right and raises so many red flags once he starts taking a closer look at company operations. His main problem now is how to cut her out cleanly and keep the loyal employees safe from a hostile takeover - or is it a coup from within?

The best solution comes in the form of his newest manager, Alex. Since she's not tied in any way to the older employees, he can be sure that she gives an unbiased eye to the pile of accounts laid before her. And she's loyal to no one else but him, which is a major plus. What to do, though, about the instant attraction he feels?

Alex thought she could finally concentrate on her career in relative anonymity. Unfortunately, it wasn't to be. While her discretion is definitely called for, her new boss is making sure she doesn't remain hidden to him! The only reason why she'd left Austin and moved to San Diego seems to have followed her, though. Does it pose a real threat to her, and ultimately, to Jack?

The excitement that permeates this novel makes it a great weekend read. Added to the fact that it doesn't have a cliffhanger ending, the suspense that follows both Jack and Alex keeps you glued. Of course they're connected when it comes to the business problems, but what blindsides them is the high point of the whole story.

One point, though. Why give away that much stock to the employees? In a few years, Jack would have lost control of his company. Just saying. Don't think that was a wise move at all.

Kali Cross hasn't disappointed me yet, with the hot action and hotter bedroom gymnastics that take place within the pages of Power Play. I also appreciate the machinations of the master puppeteer and the plot twist that plays out in more ways than anybody could expect. Although, I'm glad I hadn't lost my touch completely when what I suspected of Amanda was true. All those guessing games kept the story interesting but I'm waiting for who's next. Taylor and Mike? I hope!


To get a chance to win an ebook copy of Power Play, leave a comment below and don't forget to leave your contact email address.

We will randomly pick 1 lucky commentator and Kali Cross will email them their ebook version of choice.