Also writes under Shayne M
Shayne McClendon is an indie author who has received rave reviews for her premiere novel "The Barter System." Other projects recently released are "Completely Wrecked," "In the Service of Women," "Yes to Everything," "Damaged," "Being Delightful," "The Hermit," "Hudson" - the second book set in "The Barter System" world, and many more.
Writer, mom, and hermit...Shayne listens to the voices in her head because their ideas are awesome. Those around her have learned not to question the crazy. Coffee consumption is too high, amount of sleep is too low, but the words always feel just right.
She currently lives in Oklahoma wrangling teenagers, opening doors for her pets, and running her content writing company. She dreams of peace, quiet, travel, and always having a viable internet connection.
You can contact her by email at shayne@alwaysthegoodgirl.com, stop by her Facebook page, or visit her website and subscribe for your free story!
Shayne McClendon's work is available at Amazon. Signed print editions of her work are available on her website. 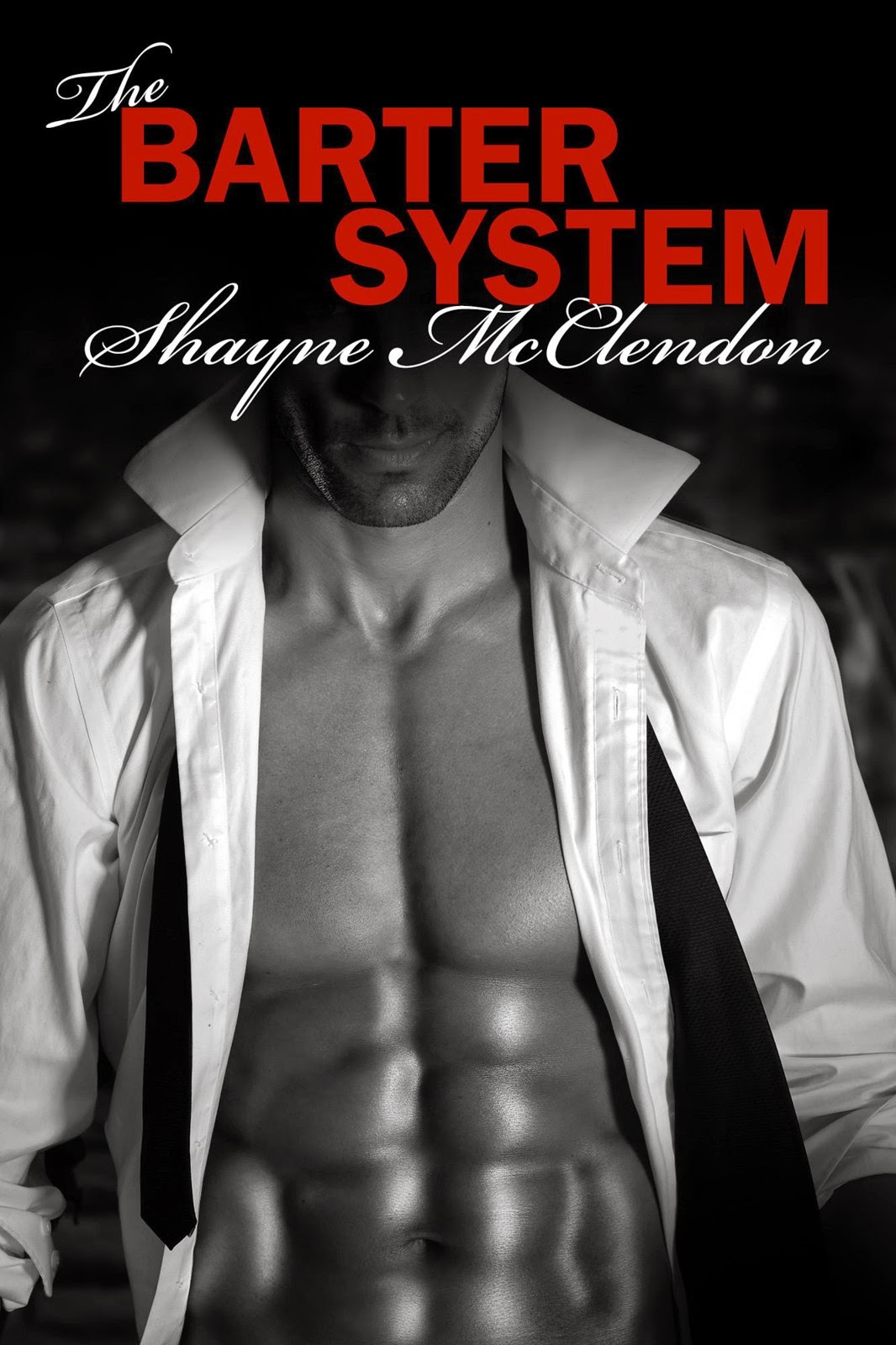 
Some people will go to great lengths to get their research.
Riya O’Connell requests applications from men around the country willing to participate in the research she needs for her dissertation on Male Sexuality. She narrows down her thousands of submissions to eight men. In return, Riya will give them…whatever they want.
As her project progresses, Riya realizes she’s chosen the eight men in the country who would love her well and that she could easily love in return. She leaves subject after subject with a small piece of her heart.
Ultimately, Riya discovers where she truly belongs…and gets an education she didn’t plan on.
NOTE: This story contains explicit sexual scenes and language and is intended for mature audiences only. Do not read this novel if intense sexual situations offend you.

Could The Barter System be classified as a supernovel? Considering its length, and the possibility that Shayne McClendon could have easily broken the entire tome into at least three, maybe even four regular novels in a series  like contemporary authors are commonly doing, it's not too farfetched.

I initially wondered how writing a dissertation could be made interesting, which is why I chose to read the book. I then remembered reading of experiments and research on finding the g-spot, or how multiple orgasms are triggered, even tests on female ejaculation, or the elusive myth of the female orgasm, and realized the tests leading to a dissertation could be fun, interesting, and not stodgy after all.

Now why didn't I choose a topic like this for my own paper? Damn. Just kidding. I doubt I would have had the guts!

Riya, however, is a different woman altogether. Curiosity drives her; not just about understanding herself, but more especially, her father. Why is he continuously setting up his present relationships for failure? Despite his claims, has he gotten over her mother's sudden death? To come to terms with herself, she must at least have a clear idea why he behaves that way, and if it's normal with most men. How much emotion do men really have when it comes to sex? Or is the stereotype of the stoic man all too true?

She reasons the only way she can get honest answers is to ask other men. How she comes up with and chooses her test subjects is fascinating, but the method of getting her answers is controversial all by itself. She must be up close and personal for her to understand what truly makes the man tick and the only way to do that would be to integrate herself into their lives in the most intimate way so they would trust her with themselves.

Eight men will provide that data, all carefully vetted and tested, all different types except in the fact that they appeal to her and they are honest. Her terms are clear: she wants them to fully bare their souls, and if it takes having sex with them to get it, she'll do it.

Each is different and affects her in varying ways. Not every one strikes her deeply, yet she becomes a way for them to change their lives for the better, too. In answering a set of questions to better understand male sexuality, they've reconciled with themselves and made moves towards the better.

Of all the subjects (with each one endearing in his own way), it would be Lucas who I felt for the most, then Victor. It wasn't their looks, even if the descriptions left absolutely nothing to the imagination, but their souls that pulled at me most. Victor is a beautiful man with awful self esteem who is Prince Charming in the rough. Overlooked, underestimated, it's not a surprise he doesn't think much of himself. Lucas... Lucas. His pain and self denial added to his innumerable sacrifices is the epitome of stiff upper lip and all that. He brought me to tears several times and I would think he affected other readers the same way.

What is beautiful about this is how Riya helps the men as she herself is being healed. Sex does bring people closer, no denying, and it's to be expected that their deepest, darkest secrets come to the fore when she probes for answers. I like that she doesn't see herself as their saving grace but as a little voice that can push them in the right and happier direction.

My only complaint is there's not enough on the club with the M's. I would have loved a little more in-depth but the book is already a tome, so it's kind of understandable that it's a bit glossed over.

All in all, The Barter System didn't just make research and writing more interesting than it already is, but also opened my thoughts to how men tick in general. They're not typical, quite far from it, but in each of these characters is a little nugget of reality where I can see glimpses of men I already know.  Shayne McClendon created an unusual yet beautiful story which should make women realize that there are men out there who can be referred to with a capital "M."