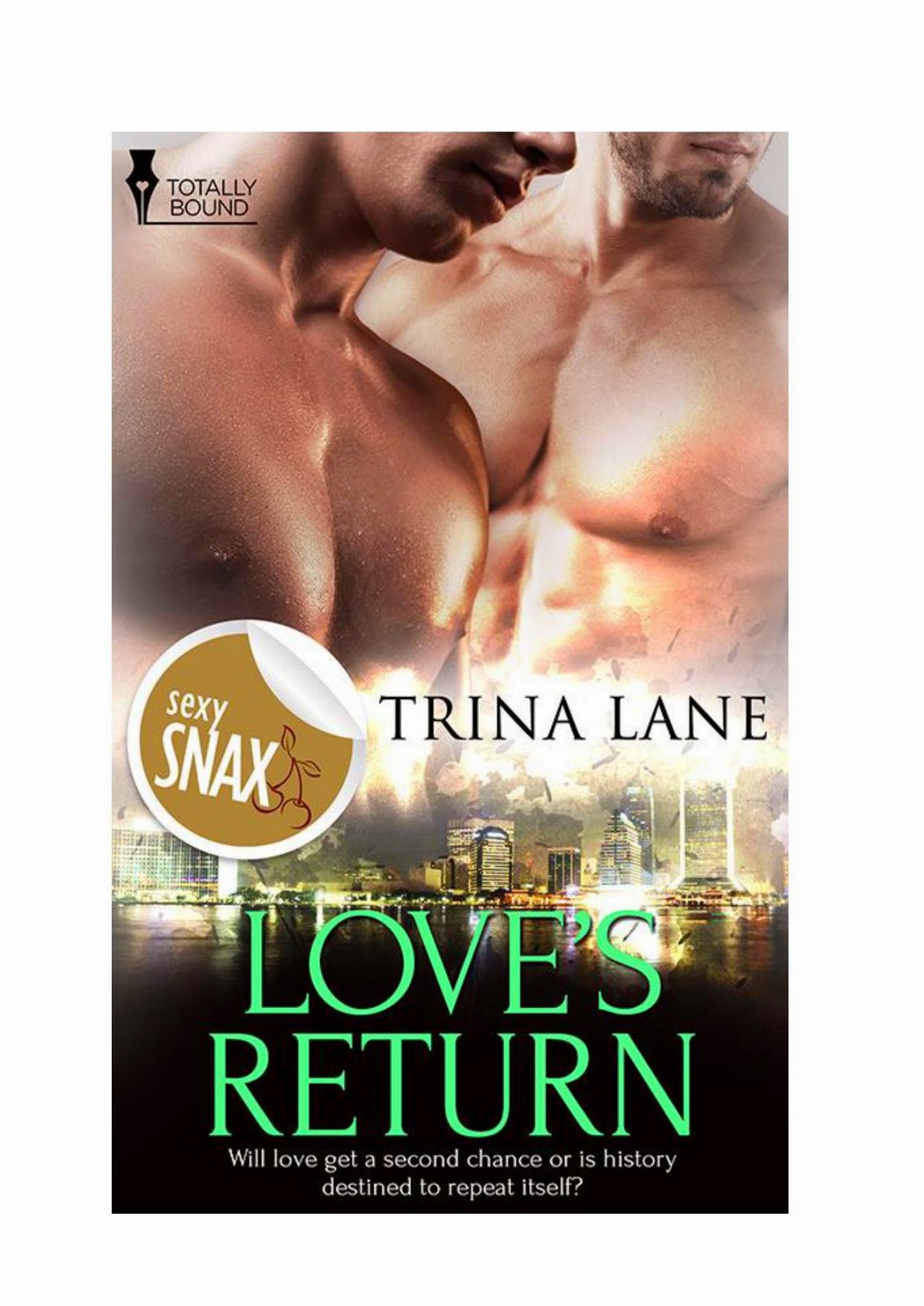 Will love get a second chance or is history destined to repeat itself?Critical care pediatrician Dean Whitten spends his days working with pint-sized people who hold the power to bring him great joy or, when the situation takes a turn for the worst, break his heart. He finds himself having a rare day off and he really wants to make the best of it. However, it happens to be Valentine’s Day and Dean hasn’t had anyone special in his life for a very long time—fifteen years to be exact. Dean is resilient, though, and is determined to make the best of the day alone. Cupid, however, decides to give Dean a little surprise when his past comes back in a big way.Just out of the Marine Corps, Eric Sparks is starting over in life. When he decides to break from preparing for his new job by going to the movies, he isn’t expecting to encounter the boy—now a grown man—who stole his heart as a teenager.Fifteen years ago, Eric left the country with his military family, ending his and Dean’s budding relationship. The two quickly discover that their dormant feelings are erupting again, especially once they’re back in each other’s arms. But Dean is settled in his life and Eric is scheduled to move across country in a matter of days. Will love and life give them a second chance?Publisher's Note: This book was previously released by another publisher. It has been revised and re-edited for release with Totally Bound Publishing.

Review by multitaskingmomma
My Rating: 4 of 4 Stars
(Based on Short&Light Read Category)

This was a really sweet romance that began when both Eric and Dean were still in their teens but sadly ended when circumstances separated them. Eric had to go with his parents to another country as his father was in the military while Dean stayed got left behind wanting. Letters exchanged were not enough when the teen life got in the way.

Now, fifteen years later, an accidental meeting at a movie theater reunited the two friends but their chemistry apparently had never lost its sizzling reaction so they hooked up once more. They still loved each other after all these years and somehow, their being more experienced and older in more ways than one served to get their teen relationship into more solid and mature grounds. The only things in the way were their chosen careers. Now all they have to do is make the long distance affair work or give up.

I had never read this before so I wouldn't really know how that first edition went. All I know is that I fell for these two men. What I really liked about this one? It was truly sweet!!! Made me smile all throughout and just pushed the right buttons before bedtime.


By reading any further, you are stating that you are 18 years of age, or over. If you are under the age of 18, it is necessary to exit this site.
Copyright © Trina Lane 2015. All Rights Reserved, Total-E-Ntwined Limited, T/A Totally Bound Publishing.
The Texas summer sun beat down on his bare skin, deepening the tan on Dean Whitten’s body. It was days like this he was thankful for cool pools, cold lemonade and best friends to share them with. Beside him, Eric lay in a blue and green striped lounge chair, his golden body so much bigger and harder than Dean’s slight frame. A sheen of sweat highlighted ridges of muscle rippling down Eric’s stomach, tempting Dean to touch him. What would Eric’s skin feel like? Was it soft like his, or did all those glorious muscles make it hard? How would it feel to dig his fingertips into the resilient flesh, or taste the salty, damp skin? Eric’s nipples were hard, and Dean longed to suck them between his lips. Sometimes he played with his nubs in the darkness of his bedroom. The pinch of his fingers caused flares of heat to shoot straight to his cock.
Speaking of cock, his was waking up, and Dean knew his swim trunks couldn’t hide an erection. He jumped off the lounger and into the pool. The cool water soothed his fevered skin and wayward anatomy. As he shook the water from his head, a giant wave covered him, sending Dean tumbling beneath the surface. Eric’s strong hands gripped Dean’s arms, hauling him back to the surface. His chest collided with Eric’s and Dean savored the feel of slick skin rubbing against him. God, what he wouldn’t give to kiss those lips only inches away. His breath caught as Eric’s blue-green eyes darkened and his pupils dilated. Dean panted in excitement, his lips tingling, and he clutched Eric’s wide shoulders. Their heads moved a fraction closer, and—
Dean’s eyes shot open. Damn it! Why did he always wake up just before the good part of his dreams? He rolled to the side and blinked as the blue numbers on his clock mocked him. He squinted at the rays of early morning sunshine slanting through his bedroom window. His internal alarm clock refused to recognize that it was his day off and a Sunday to boot. After years of early morning rounds and late night on-call duty, it was difficult for him to maintain normal sleep patterns. Usually this didn’t bother him that much—after all, it wasn’t like he had a regular bed partner to disturb when his phone signaled an emergency at the hospital—but it would be nice to sleep in when his schedule allowed for it. Dean reluctantly rolled out of bed, knowing he wouldn’t get any more sleep. He stumbled down the short hallway leading to the kitchen and jumped back when his bare feet touched the cold tile.
Socks. He needed socks. He turned about-face and slid the folding door that hid his washer and dryer. When he opened the dryer, he frowned, scratching his head for a second, his sleep-addled brain confused. He could have sworn he’d done a load of laundry the other day. Lifting the lid of the washing machine, he cursed as he saw the bedraggled remains of his missing clean clothes. Taking a tentative sniff, he determined that since the fabric had sat in the machine for a day it smelled a little musty. It was probably best to run the load again, so he added some soap and reset the cycle.
Retreating to his bedroom, he discovered that his dresser drawers were rather bare, since his wardrobe mainly consisted of scrubs, but he managed to find an old Baylor University sweatshirt that had seen better days. He dug around for a pair of socks, smiling when the only ones in the drawer were orange and black striped with white ghosts and googly eyeballs. A patient had given them to him last Halloween. He tugged them on then turned to walk out of his bedroom. Catching sight of himself in the full-length mirror attached to his door, Dean laughed. The green and yellow faded sweatshirt, red and black flannel sleep pants, and orange and black striped socks looked ridiculous together, even by his standards. His sister Carol, a buyer for Barney’s, would definitely threaten to revoke his gay card if she caught sight of him dressed this way. In her romantic imagination, all men lounged around their luxury apartments dressed in silk pants and Italian leather slippers, waiting for their love slaves to service them. However, in reality, it was a cold February morning, he was alone and he didn’t give a rat’s patootie if his ensemble didn’t exactly coordinate. Or resemble anything a sane individual would willingly wear in public. Although the love slave part didn’t sound like a bad idea. The sumptuous scent of coffee emanated from the kitchen, beckoning Dean as he silently sent up a prayer to the gods of automatic timers.
Settling down with his mug of caffeinated bliss, he turned on the TV to watch the news. His coffee nearly went flying when the high-pitched voice of a bubbly, bottle blonde reverberated from his surround sound speakers at an insane volume.
“Happy Valentine’s Day!”


Note: Copy provided by publisher in exchange for an honest review.