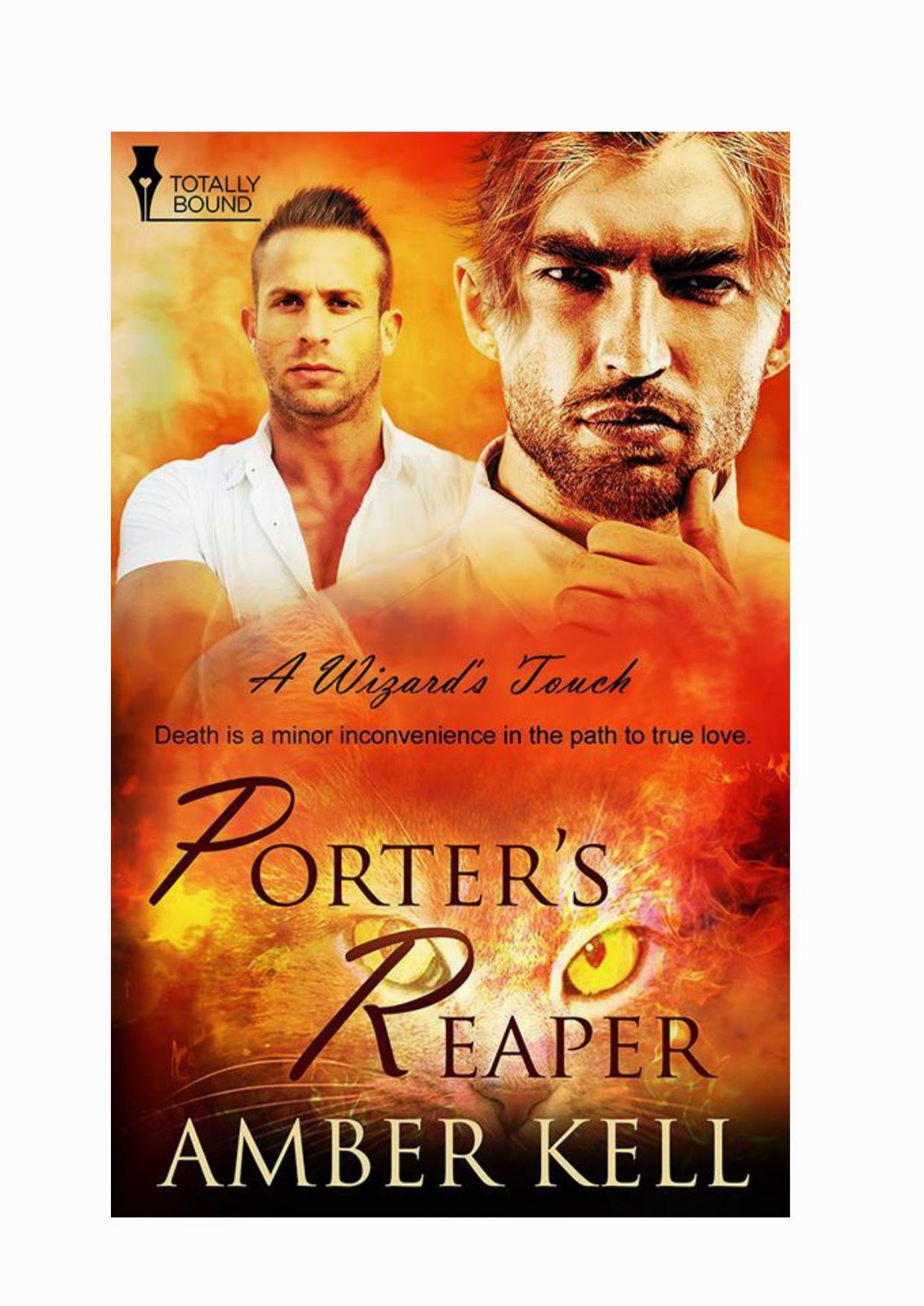 Death is a minor inconvenience in the path to true love.When the God of the Underworld sends Alstair back to the Academy to help pick out a new headmaster, he doesn’t mention he put Alstair in for the job. Angered but willing to keep his word, Alstair discovers the headmaster position comes with more knots of deception than a sailor’s rope.Porter Exton had a crush on Alstair. He’d watched Alstair train Elijah through the window and had spent more than one night dreaming of the Reaper. However, dreams were set aside in order to discover the truth about his death and if the man who killed him is responsible for the other deaths at the school.Two men with different backgrounds need to discover what they have in common if they hope to save themselves from plotting gods, egomaniacs and possible killers.

Review by multitaskingmomma
My Rating: 3.5 of 4 Stars
(Based on Short&Light Read Category)

If there is one thing that makes me keep clicking on an Amber Kell book, after the read, I always end up smiling and relaxed.

Book 5 of a series by this author is no problem, every book usually are standalone, even if the stories do tend to overlap each other. The characters from the previous installments are always there be they mentioned or take part of the particular plot. However, I have noticed that even if I come in at odd series installments, somehow I am never lost.

In this particular story, we have that ghost, Porter, from Elijah's Ghost (A Wizard's Touch, #4) who is now living in Hades and whose powers are reemerging. We also have that gorgeous Reaper, Alstair, have his comeuppance, so to speak. Alstair is conned by Hades to go to a supposed convention where he is supposed to be the representative of his master when he realizes he is now the new headmaster. Accompanying him, as assistant, is Porter.

And so the fun begins when Reaper realizes that Porter had been keeping his own secrets and had wanted to join this new adventure to find and avenge his murder. A murder that had been swept aside by the school officials to cover the tracks of the murderous son of a huge benefactor. In the meanwhile, they have to also discover who the murderer is. The murderer of more students within this school Alstair is now headmaster of. To complicate matters, Porter is someone he does not wish harmed or even leave his sight. And these feelings come from a man, errr, Reaper, who swore never to get into a serious relationship.

This was a fun read. So okay, I know, there are some timeline issues, there are some inconsistencies and all that, but the beauty of this read is that it is short and so light it was enjoyable and just plain relaxing. I have no hesitation to recommend this read to all who want to just leave be the serious life and just dive into a world of mystery and paranormal.

By reading any further, you are stating that you are 18 years of age, or over. If you are under the age of 18, it is necessary to exit this site.
Copyright © Amber Kell 2015. All Rights Reserved, Total-E-Ntwined Limited, T/A Totally Bound Publishing.

“I need you to go to a conference.”
Alstair Gorman looked up from where he was sharpening his scythe to face his boss—Hades, God of the Underworld. He tried to reassemble Hades’ words to form some discernable pattern, but no matter how he reshaped or twisted them around, they still didn’t make any sense. “I’m sorry, did you say a conference?”
What kind of conference could Hades go to that he thought Alstair would make a logical substitution? He didn’t even know gods went to conferences. Alstair didn’t have the same powers as a god and last time he checked, he wasn’t a shoo-in for a slot at Mount Olympus or any other godly realm.
“I’m serious. I need a representative and I’ve chosen you. You are the best man for the job.” Hades’ tone didn’t indicate any wiggle room in changing his mind. Crap, Alstair wasn’t going to able to weasel out of this.
Reapers didn’t go to stupid conferences. What kind of workshops could they have? Soul Severing refresher courses, Smiting 101 or How To Tell Someone They’re Dead?
Preposterous!
However, if Hades needed a representative, Alstair would probably be the best choice out of Hades’ options. He wasn’t just one of Hades’ elite reapers—he was the Reaper. The first reaper ever marked as the God of the Underworld’s own and granted a scythe.
Sighing, he flicked the switch to activate the folding spell. An ancient magic allowed his scythe to collapse like a pocketknife. Even after centuries of use, Alstair still enjoyed watching the process. Once it had shrunk, he tucked the tiny weapon into the leather holster mounted on his belt. Most people thought it was one of those multi-tools. He just nodded and agreed whenever they asked. The only other thing he wore for his job was the tiny hourglass dangling from a chain around his neck. It had its own magic to conceal it from humans after Alstair had had one too many lovers flip it over and cut their own lives short by accident.
Alstair sighed again to emphasize what a pain he considered the assignment. Might as well give in—it wasn’t like Hades would change his mind. He never did. “Where am I going?”
“To a meeting of leaders at the Mayell Wizard Academy.” Hades’ eyes flamed bright red, indicating strong emotion.
Alstair groaned. Out of any possible conference he could attend, one between stuffy academics sounded the worst. Maybe one day he’d find the perfect combination of words to hold off Hades’ persuasive ways. Unfortunately that wasn’t today. Still, Alstair gave it one more try.
“Why can’t you go?” He’d served Hades too many years to be intimidated by a little thing like hellfire and he refused to go down without a fight. Giving in right away put him in a weak position. Hades wouldn’t respect him if he folded like a scythe.
“Because Persephone is coming this week and I promised to take her on a picnic.” A goofy smile crossed Hades’ face. Defeat swung like a cell door clanging shut and sealing off all of Alstair’s avenues of escape.
He groaned. Nope, no way could he win against that argument. After all these years, the Queen of the Underworld still led Hades around by his cock. Hades let her do whatever she wanted and if the God of the Underworld had promised his bride a picnic, nothing would stop that from happening.
“Why does anyone need to go at all?” See him be reasonable. They both won if they skipped the event entirely. Conferences were like weeds—another was always springing up. Why would it matter if they missed one, or even a dozen?
“Because they will be choosing a new headmaster for the Academy and the spirits are telling me there is a great deal of unrest. I need someone to be my voice, and I’m trusting you’ll know my will. Besides, we don’t want another incident like Elijah. The Academy staff doesn’t have the skill to spot a future necromancer, and I can’t risk them missing the signs of power. Elijah had necromancer energy all but pouring off of him and they labeled him a low-level magic user. Who knows how many other students they missed over the years? It might not be that necromancy is so rare, maybe they are just incompetent at noticing the signs.”
Hope was a dangerous emotion. If there were untapped and unacknowledged necromancers swarming the world, Hades wouldn’t be content until every one of them had been located.