Leona is a longtime staunch supporter of human rights and environmental causes. Her favourite genre to read is M/M fiction and she particularly enjoys science fiction, fantasy, and action/suspense subgenres—especially if they have a nice seasoning of romance. She has far too many books on her Kindle, has overloaded her phone with even more and, when not reading, writing, being driven to distraction by her children, or being overlorded by her three cats, can be found trying to locate the portal that the sock monster uses to steal socks from her dryer.
***Works by this author are protected by Muso. Please help support the author who is supporting her family by only purchasing legal copies*** 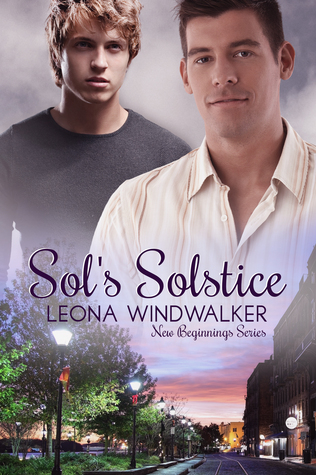 Sol is used to flying under his family's radar, unless focusing unwanted attention away from his more outgoing, older twin. The day comes when he pays a steep price for attempting to shield his brother. Running for his life, he is nearly run down by a car driven by Seth. Can Seth help Sol find his way back from the darkness?

Sol is just turning eighteen when his world fell off from right under his feet. His twin, however, made it through and got into a really great world where he now has opportunities to grab that can make his future so much better. They may be twins, but there is nary the semblance of 'one for both and both for one' that most of us read about when the main character is one set of a twin. For Sol, it was survive or die on the street.  It could have gone good when his parents found him again, but it did not. His parents are a bit on the dark side so his life just went downhill from where he was already down. On a day that surprised even him, he gets the opportunity to escape.

This is where the fairy-tale twist comes in.

Seth is just driving through when he almost side-swipes a young man in conservative chinos and button down shirt. What was wrong with the picture? The man was barefoot and scared as heck. He obviously had some form of PTSD and all Seth could think of was to help. And he did. He takes him home, gives him food, medication and a bed, and soon, he finds himself giving more of his heart.

Seth and Sol have a relationship that Sol really was not totally comprehending. All he knew was that Seth was his savior and he loved him. When his parents come back and his long lost twin reappears, his mind almost breaks when once again, he is trapped in a situation that could turn fatal. All he needed now was for his Seth to find him and get him out of the hell.

There is a lot going on in this story. There is romance, suspense, kidnapping, torture, brainwashing and just bad medicine all around. However, far from becoming confusing, the story of Sol keeps going until his happiness is handed over to him. Again, I think 'fairy tale.' Should he have not landed on his butt and gotten rescued by someone such as Seth, then he would have long been erased from this planet. Seth is a great guy and he is loaded enough to give Sol all he needed.

What troubles me is Seth, as a character. I didn't really get to know him at all, not like I did Sol. Sol is a beautiful man and what happened to him was traumatic and tragic. His HEA is well-deserved, but for the 'but' in Seth. I wish I got to know more of him for he gives me a good feeling so I know he is a good man.

Overall, this is a light read and even if this is a bit lengthy, it reads short, and this is what made me keep going till the end. It made me feel good despite the unfortunate events that unfolded. I may have rated this low but I really liked this. In fact, I caught myself talking out loud about how unfortunate Sol's circumstances were. I guess what I want to see is this re-edited and made longer, then it would have left a bigger impact on me.


To get a chance to win an ebook copy of Sol's Solstice, leave a comment below and don't forget to leave your contact email address.

We will randomly pick 1 lucky commentator and Leona Windwalker will email them their ebook version of choice.