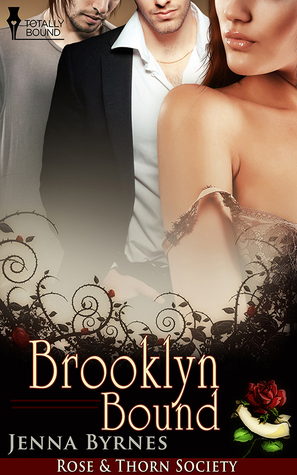 This is book three in the Rose and Thorn Society series.
Tucker and Gabe discover they’re soulmates. If only they can get Gabe’s wife Brooklyn to admit her own true desires.
Tucker Gleason is a junior partner in the prestigious law firm of Dryer, Stokes and Associates. His career is going well—he’s on track to make full partner, having won more cases than any other lawyer in the firm. His love life is another matter. On his own for too long, he gets a much needed jolt when he meets one of the owners of the construction company hired to build the new law firm offices.
Gabe Conner is a happily married man, until he meets Tucker and is reminded of the hot gay relationship he experienced in college. Thinking it was just youthful experimentation, he never mentioned it to his wife. But now that he’s met Tucker and the two men are so drawn to each other, he has no choice but to bring it up.
Brooklyn Conner isn’t as shocked to learn her husband has gay tendencies as she is to find out he’s interested in one of her bosses. She’s a paralegal at Dryer and Stokes, and worries about losing not only her husband but also her job if things fall through with the sexy junior partner. She can’t resist their advances when they both join forces to seduce her, and quickly decides she doesn’t need to. Sex with two men is hot. Until Tucker’s true appetite is revealed, and Brook’s vanilla world is turned upside down.
Reader Advisory: This book contains scenes of M/M intimacy and ménage in a polyamorous relationship between two men and a woman.
Publisher's Note: The stories in this series are linked solely by theme and can be read in any order. This book can be read as a standalone title.

By reading any further, you are stating that you are 18 years of age, or over. If you are under the age of 18, it is necessary to exit this site.
Copyright © Jenna Byrnes 2015. All Rights Reserved, Total-E-Ntwined Limited, T/A Totally Bound Publishing.

“Suck it!”
Tucker Gleason snapped his head to the left upon hearing the command. The speaker was a handsome man with long, flowing black hair and the tightest abs he’d ever seen on someone who was obviously in his forties. And the longest cock. His mouth watered at the sight of the thick shaft with a bulbous purple head.
Two naked men knelt in front of the well-hung Dominant, paying homage to the magnificent stud. Hands cuffed behind their backs, both subservients used mouths and tongues only, enthusiastically working together to give the man what appeared to be one hell of a blow job.
The Master patted each of their heads. “That’s it. Good… So good.” He glanced up and spotted Tucker watching. A mixture of lust and pride shone in his eyes as he smiled. “Care to join us? We’ll always make room for one more.”
Tucker waved and kept walking. “Another time, but thanks.” He passed three men who were vigorously chain-fucking on a burgundy-colored leather sofa, and passed a group of four male bodies, melded into such an odd position that he couldn’t tell what they were doing.
The door on the far wall led into the bar and lounge area of the Rose & Thorn Society, one of the biggest BDSM social clubs in Southern California. Tucker and his former partner Mason had frequented the place in their heyday. Both of them had loved the bawdy, raucous activity. Mason would have taken the long-haired hunk up on his offer in a heartbeat, as long as Tucker had agreed. They’d been adventurous in those days, playing hard and loving well.
Mason had been gone nearly a year, and Tucker hadn’t been back to the club in all that time. At first he hadn’t been interested, and after a while he just hadn’t thought he’d be able to face the people there. Eventually he’d settled into a celibate routine made easier by long hours at work and the occasional hand job in the shower.
Recently, the old urges had returned and Tucker had realized that at thirty, he was too young to live like a monk. He’d updated his ‘clean bill of health’ certificate and had returned to the club, thinking that perhaps a night of not thinking would be just what he needed. But now when it came down to it, he wasn’t ready to hop in the sack with people he didn’t know. The scenarios in the gay-themed room had turned him on, but for some reason he just couldn’t dive back in. It was more difficult being there alone, he decided, but it wasn’t just that. He missed Mason. He missed being in a relationship, waking up with someone, going for coffee and muffins on Sunday or staying in bed all morning and going out for a late lunch.
Being alone sucks.
He didn’t stop for a drink at the bar, just left and climbed into his dark blue Lincoln Navigator, then headed home. Returning to his two bedroom condo didn’t cheer him up much, because as he walked through the spacious living room all he could see was Mason. Photos of the man and shots of them together, grouped in black and silver frames that matched the décor of the room his old lover had fashionably decorated. He’d thought about changing things up, but Mason had had the flair of the duo, and Tucker wouldn’t know where to begin. He had a diploma from the University of Southern California and a law degree from Stanford, but decorating was not his thing. The house looked nice and that was good enough for him, even if it did remind him on a daily basis of what he’d lost.
Standing in front of the fridge, Tucker downed a bottle of cold water then went to plug his cell phone into the charger for the night. A small green light blinked at him, notifying him of a text message. He kept his phone on silent, hating it when people’s cells constantly chirped or buzzed. He’d check his messages in his own time, not when the phone told him to, much to the chagrin of his father, who was also his boss.
He scrolled through a couple of screens and saw that the message was indeed from William Dryer, the man his mother had married when Tucker was two. The only father he’d ever known, and definitely more of a dad than the man who wouldn’t give up legal rights so that Will could adopt him.

Remember our meeting at eight a.m. tomorrow. Don’t be late.

Tucker’s fingers flew over the keyboard of his smartphone.


Review by Ramona
My Rating: 4 out of 4 Stars
(Based on Short&Light Read Category)

Tucker is a man who turns heads because he's gorgeous, successful, and extremely ambitious. But he doesn't have any interests outside work; all his sensual desires disappeared a year before and he's accepted his completely celibate lifestyle. Then his stepfather asks for his advice on a personal project which throws him straight in the path of one very fascinating Gabe Connor. There is a tiny problem there, however. Gabe is married, and his wife is a paralegal at the firm where Tucker is a junior partner.

Gabe feels that frisson of attraction to Tucker, too. But he isn't eager to wreck his marriage just because he feels lust for one man. Then Tucker throws out a proposal so fantastic it leaves his mind reeling, and his libido going into overtime.

Brook has been very happy with her marriage and thinks that Gabe is satisfied also. Then Gabe voices Tucker's proposition to her and her world is completely shattered. Is she willing to make such a complete change to her life? What about the risks involved if any whisper of what they're planning leaks out? What if it doesn't work at all? Can she live with Gabe and face Tucker if they fail?

There's nothing simple about this plot at all! Each character is so very complicated, yet they work together to bring a rather satisfying ending. Brook put up enough of a fight to make the conclusion a fulfilling one, while her willingness to try something new for Gabe made her a brave woman, in my opinion. There are so very many that, while not shying away from imaginative fantasies, would balk when asked to translate that fantasy in real life. Yet she had the guts to first ask about it and admit she knew nothing at all about what Tucker was talking about then give everything a try.

I like that Brook goes from someone in denial to accepting - after she forms her own opinions! I'm not so sure how masterful Gabe would be, though. It seems that Brook would be holding the reins in this relationship. And Tucker. He at least realized in the end that he didn't need to bribe the couple in order for them to be affectionate towards him. They like him simply because of who he is, not because of how much money he has.

There is a scene where Brook exerts her dominance on Gabe - while it's a good insight on her future dominant tendencies, I felt that she was more desperate than upset about her husband's proposition which is why she resorted to getting her way through rough sex with him. I did enjoy the realism that her ploy worked. For a while.

Tucker in his own way was just as willing to experiment. While it was obvious from the beginning that he was gay, his enthusiasm in convincing Brook showed his personal discovery that he was bi, at least with the right woman. Gabe made his own admissions to being bi, after his confessions to Brook and embraced himself.

Brooklyn Bound is more of a journey of self-discovery than a story of nothing more than a series of sex scenes connected together. While there is a lot of erotica that just centers on eroticism more than a plot, Jenna Byrnes completely avoided making this yet another one of these type of books with good, solid storytelling.