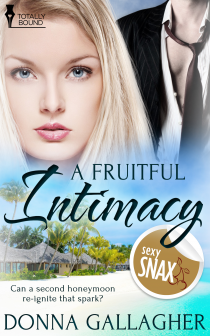 The fire and passion of their love has slowly ebbed away through years of neglect. Can a second honeymoon re-ignite that spark?There was no physical contact in their marriage for so long that when Ben first hatches his plan to take Beth away for the weekend it really is all about the sex and providing an environment where there are no distractions, and no excuse for her to refuse his advances again. But while Ben is making all the arrangements it suddenly becomes clear to him that there’s something more important at stake. His marriage, to the woman of his dreams, is actually in trouble.Beth believed that motherhood would come easy, that building a perfect world around her three sons and husband would be achievable. But reality has proven her wrong. The more she tried the bigger her failures shattered her confidence. Where she planned to shower her family with home baked cookies, smiles and unconditional love—she struggles just getting the evening meal on the table. By the end of the day she’s so exhausted that she can’t even fulfil her marital obligations. Once upon a time making love to Ben was just as necessary as breathing, before her body was ravaged by the demands of pregnancy and childbirth. They’ve grown so far apart that Beth’s convinced Ben’s having an affair.Can a second honeymoon really help Beth and Ben bridge that growing divide between them and bring back the fire and passion that has slowly, through years of neglect, ebbed away? And will this give the couple a much needed chance to work together for a happier future? Or is it too late?Publisher's Note: This book was previously published elsewhere. It has been revised and re-edited for release with Totally Bound Publishing.

Review by Ramona
3.5 out of 4 Stars
(Based on Short&Light Read Category)

Can a woman's intuition ever be so far off the mark? In A Fruitful Intimacy, Donna Gallagher shows that it is indeed possible. And, this situation is probably more common than any female would like to admit.

Marriage often comes with two people who wear the masks of perfection so much that they become afraid to show who they really are, or worse, who they've become. This puts so much stress on their relationship that truly, whoever said that perfect marriages last forever must have been high.

Ben is slowly waking up to the reality that there are cracks in the facade of his marriage, and if he doesn't do anything to fix it, there may be no saving it at all. First he realizes that his work overshadows any life he has at home. Everything is suffering, from his role as a disciplinarian in his family to the intimacy he had with his wife. Maybe a few days without pressure can help with that. Maybe.

Beth is a wife on the brink of a meltdown. Nothing seems to go right. Not being a mother, nor being a wife, not even being a desirable female. She's looking at herself in such a warped view, she doesn't enjoy anything about her life anymore. It's gotten to a point she neglects herself so she has enough energy to spend on everybody else. Her feelings of inadequacy lead her to pull away from the very person she's sworn to love for the rest of her life, and the one, ironically, who's sworn to cherish and protect her: her husband.

It's gotten so bad that they both fake it or avoid it. This makes it even worse for Beth, who imagines that Ben is seeking solace somewhere else. With all the calls he is making, the hours he stays at work, and his furtive actions, why should she expect anything else?

Maybe it's not recreating the best time in their lives that would put the magic back in the marriage but the time to focus and talk to each other. If they have the strength to take off their masks and bare their true selves, perhaps they have a chance to save their marriage.

If there's any semblance of a fantasy in this story, it's the resolution that makes it a fairy tale. The lines make it something that a female would like to hear, but have a tiny possibility of coming out of a male's mouth! Yes, I agree that there are a few men who think and act like that, but they are a true endangered species. Or nearly extinct.

But Donna Gallagher's true gift in A Fruitful Intimacy is the lesson of self-acceptance. Beth finally realizes that she is trying to create perfection, which is impossible. Life changes also affect people physically, both men and women, and it makes sense to welcome them. There is no way you can stay the same over a year, much less a period of ten years or more. What doesn't change as swiftly is what you'd feel towards your significant other. While they're tempting to imagine murdering at times, there's no way you'd want to be without them - as long as the foundations of your relationship are solid and strong.


By reading any further, you are stating that you are 18 years of age, or over. If you are under the age of 18, it is necessary to exit this site.
Copyright © Donna Gallagher 2015. All Rights Reserved, Total-E-Ntwined Limited, T/A Totally Bound Publishing.

The heat from the sun’s rays kissed her shoulders. Droplets of perspiration ran down her bikini-clad back as she raced across the powdery, soft sand. Her laughter, using up the much needed oxygen from her lungs, joined together with the sounds of the gulls squealing above. Grains of sand from Ben’s nearing footfalls stung the backs of her calves as he closed in on her. She knew he would catch her quickly. She welcomed it. As his arms closed around her waist, she felt her feet lifted from the ground and their bodies tumbled together into the spill of the ocean.
Ben had turned them at the last moment so his body would cushion her fall, but the splash of seawater covered her. The refreshing feel of the warm water cooled her skin but only Ben could extinguish the sexual fires burning within her.
“Running from me already, Mrs. Russell? On our honeymoon, no less.” He laughed as his lips moved over hers, demanding yet gentle at the same time. His tongue exploring every crevice of her mouth in its welcomed assault, hers matching the intensity and hunger equally. The beach deserted—Ben’s hands explored her body, cupped her breasts, teasing her nipples into hard buds, causing a ripple effect to heighten her already sexual state. Liquid pooled in her bikini bottoms, mixing with the salty wash of the waves rhythmically lapping and breaking over her sensitized pussy.
“Touch me, Ben,” she pleaded, as his strong fingers delved beneath the sides of her wispy swimwear, easily pushing the fabric aside. Their promised destination had her panting with need, spreading apart her thighs in encouragement. She arched her hips forward, impatient for that moment when Ben’s talented touch would make contact with her throbbing clit—wanting to make her pleasurable climb to destination bliss.
What about the warm dishwater had Beth reminiscing about her honeymoon? There was nothing romantic about doing the dishes. After ten years of marriage and bringing three kids into the world, she had cleaned up more times than she could count. Could just the feel of the warm water on her skin be enough to bring about those memories of better times? Swimming, relaxing, or making love had been their only concerns back on that romantic, idyllic island. Whatever the reason for remembering how things used to be, it did nothing to improve her mood. Those days, when romance and sex had been a wonderful feature of her marriage to Ben, were long gone.
Once upon a time they hadn’t been able to keep their hands off each other. Ben had taught Beth all there was to know about sex—sensual, needy, or just plain hot and heavy sex. Together they had explored most of the positions listed in the Kama Sutra. Marking them off one by one as they’d groped, stroked, licked or sucked over every inch of each other’s naked flesh. These days she was lucky to get a kiss on the cheek as Ben raced out of the door on his way to work. More disturbingly, Beth found this new development a relief.
Not that she could blame Ben for his lack of motivation. Beth didn’t need to look in the mirror to confirm she had let herself go. Those bikini-wearing days, like back on her honeymoon, were a long way in the past—her once flat tummy, now flabby, covered in stretch marks. Her hair, her pride and joy back in the day—treated with regular hair dressing appointments and top-priced conditioning treatments—now lucky to get a quick brush before being drawn back into a ponytail. A top and shorts or sweatpants, paired with a floppy jumper, her choice of clothing these days, depending on the weather. She had little time to do much more, always something else needing her attention more urgently.
Ben, on the contrary, looked just as good as he had when Beth had first met him eleven years ago. In fact, he looked even better, in her opinion. He had filled out over the years—but where her body had turned to flab, Ben had muscled up. The laugh lines now gracing his face highlighted his sea-blue colored eyes, while her wrinkles just illuminated the dark circles underneath hers.