Cooper Davis first discovered the allure of m/m storytelling when she watched My Beautiful Launderette with a college roommate. Later, her passion for stories about men falling in love and finding their HEA together was stoked by online slash fiction. After years as an avid fan of m/m and slash, Cooper finally decided to try her hand at penning her own stories about same-gender romance and love.
A voracious reader across all subgenres of m/m fiction, Cooper is particularly fond of courtships set against the breathless backdrop of scandal and intrigue found in period drawing rooms. She is thrilled that her first historically themed m/m romance series debuts this December with A KING UNDONE (Samhain). 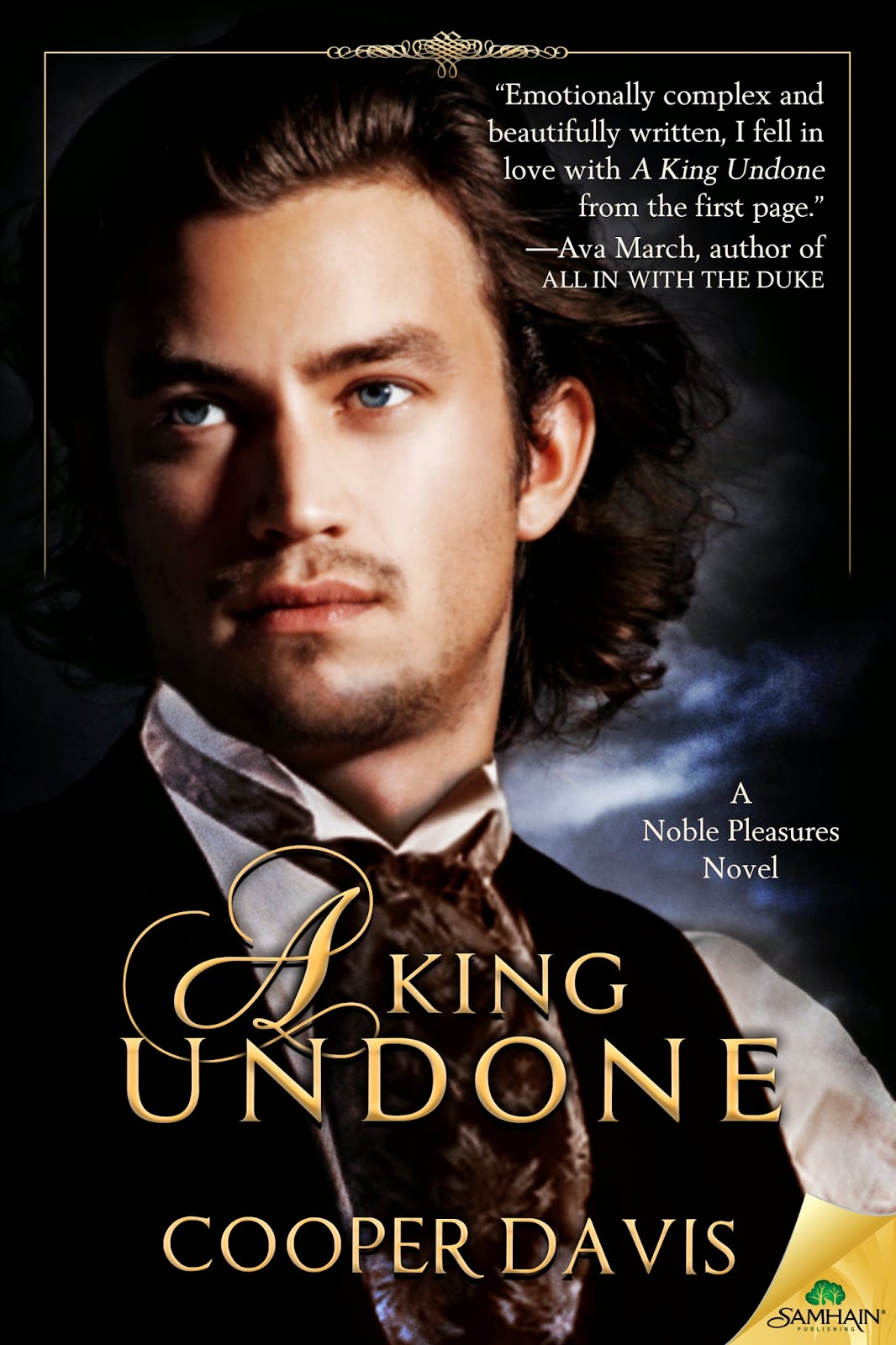 Sometimes you have to risk everything, to follow your heart…
Noble Pleasures, Book 1
In a world where gentlemen openly court and marry fellow noblemen, the threat of scandal still lurks behind every velvet drape for kings and princes. Such has been the fate for King Arend Tollemach, forced to sacrifice his heart on the altar of regal duty.
Now that his wife is dead and his royal obligations are at an end, he’s ready to take an unthinkable risk. King Arend seeks a concubine from Temple Sapphor, a secretive, gated world where he will finally shed his virginity—as least as it pertains to making love to a man.
Julian never thought he’d spend ten years on the temple shelf, passed over again and again. Just when he despairs of ever finding placement in a nobleman’s bed, Arend walks into the temple. A lonely eyed, beautiful king who could easily steal his heart.
Arend discovers he has no problem opening his bed to the exquisite concubine. The problem lies in finding the key to his long-shuttered heart.
Warning: Contains a beautiful, virgin king desperate to bed another man, a concubine who fantasizes about being claimed and revered by a strong monarch, and a sea of scandal set against a sensual, palatial backdrop.

I have to confess, again and out in the open, I used to be a historical novel nut. I also used to be a Barbara Cartland nut. So when I got to read this, I did not expect my nuttiness to come full circle, and in an M/M novel.

A King Undone is an alternative historical novel set in a world where husbands marrying husbands was the norm but not necessarily tolerated by the gentry and royalty. Such is the plot as we open the first page and the whole situation of acceptance/intolerance love of a future king and his prince turns an expected fluffy story to something else.

King Arend fell in love with the young prince from a neighboring kingdom but what should have ended with a royal wedding to rival that of Cinderella, his ended in tragedy and a life filled with misery. He did produce the requisite heir but not the spare, which was unfortunate in the eyes of the Council. Now a widower and his heir married to his own husband, Arend thinks he can finally have his chance of a happier or more tolerable life, with a man in his arms. His choice was to go to connect with the Temple Sapphor so he could choose a concubine. There, he meets Julian and thinks, maybe he now can have the happiness he dreamed of. Maybe.

The real world, unfortunately, collides with Arend's dreams. Not only is it not thinkable of having a king with a male concubine, but now they expect him to drop his life and be a slave to procreate for a spare heir. To make things worse, he has to either bow to society's demands or risk his son and son-in-law's misery as well. The plot twists, it turns, it is complicated.

I am amused, I am surprised, and I definitely loved the men and the whole scenario. Now this only needs an mpreg twist to check all my boxes but I don't think author Cooper Davis is agreeable nor would the other readers. Definitely a must read recommend for all those who love history with an M/M twist.

To get a chance to win an ebook copy of A KING UNDONE, leave a comment below and don't forget to leave your contact email address.

We will randomly pick 1 lucky commentator and Cooper Davis will email them their ebook version of choice.