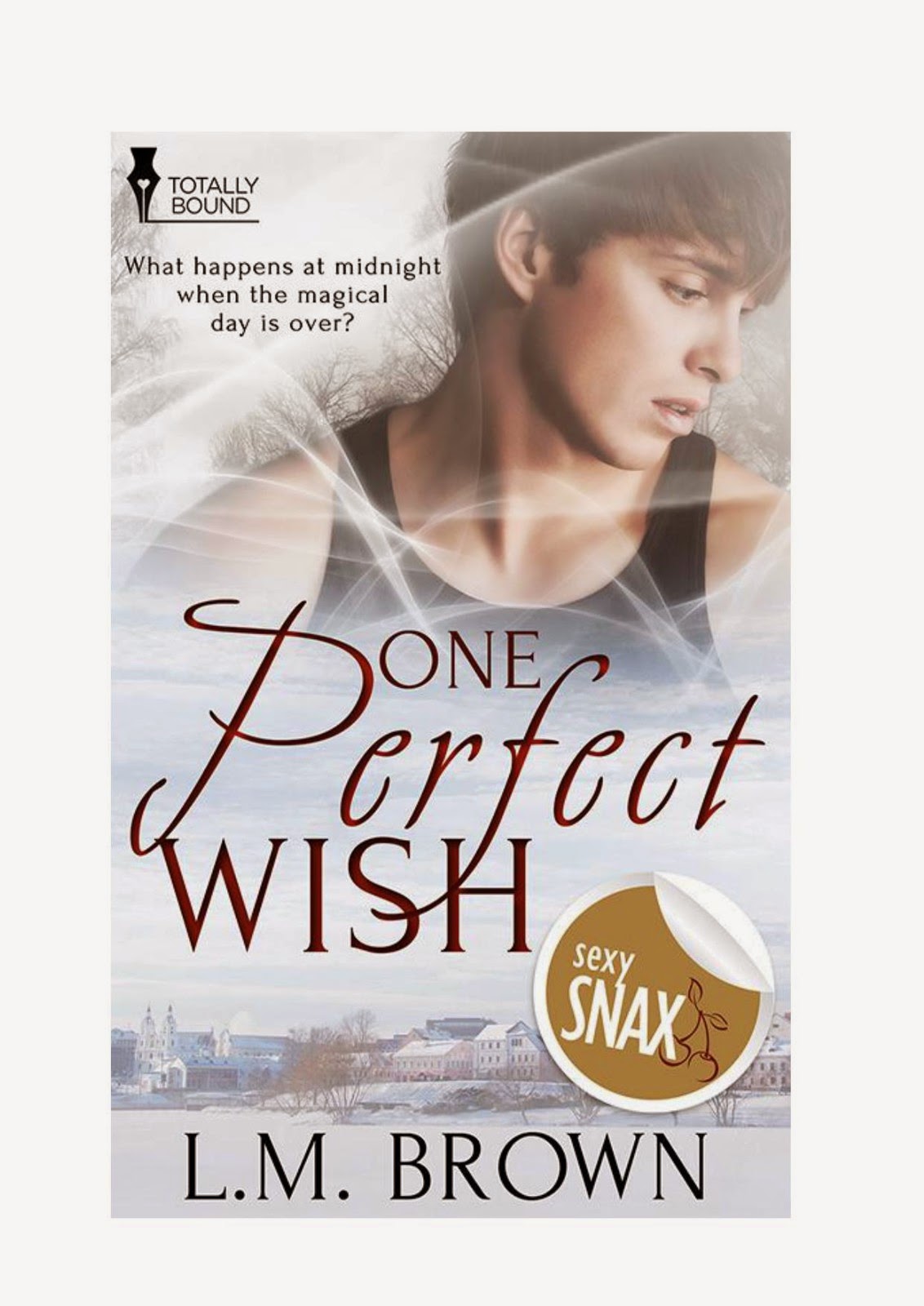 Playing the part of another man’s husband to fulfil a wish is easy, but what happens at midnight when the magical day is over?


Scott Baxter is a workaholic with no time for love, until a djinn pulls him out of his life and deposits him into the bed of Cameron Kirk. Cut off from his life, Scott isn’t happy about the idea of being forced to help the djinn grant an unspecified wish, but he soon finds he has no real choice in the matter. The djinn, who has turned his life upside down, has powers that prevent Scott from leaving and ensure he does nothing to ruin Cameron’s day with his ‘husband’.Reluctant at first, Scott finds that as the day progresses he starts to enjoy playing the role of Cameron’s husband. He connects with his unexpected lover in a way he never has with other men.Scott searches for clues to help him track down Cameron after the day is over and he returns to his own life. He doesn’t want the day to end, but the wish is out of his control and when the magic is finished his time with Cameron may be over too.

If you had a wish all of your own, what would it be? Remember, you only get one wish and it should count. This is the plot of One Perfect Wish, a wish that was unexpectedly offered and granted. It made a whole lot of difference in the life of Scott and changed him for the better.

Waking up cuddled in the arms of his husband was a huge surprise for Scott. For one thing, Scott does not do relationships so how could he suddenly have a husband? A very sensual husband called Cameron whom he absolutely has no idea about but was beginning to love. No, it's not amnesia as it turns out. Scott is merely the wish being granted by a djinn by someone and for someone, he has no idea of. Worse, the djinn responsible won't tell either. It's against the rules.

As Scott goes through the motions of the one day wish, he realizes that he is happy and does not want to leave. It surprises him so when the clock nears to strike the twenty-fourth hour, he gets desperate, not wanting to go. When the day is done, so is his domestic life and Scott is miserable. He searches high and low for his missing husband and when he finally does, he is faced with a decision and one wish. Will he take on the life without Cameron or will he take the challenge and leave the life as he knows it for a chance of a happy future?

I saw the title, and I thought: fairy tale. I like.

I saw the cover and it is dreamy.

I read and I cried and I was just overwhelmed.

This is such a beautiful and unexpected story, very different from the usual and a read that grips the imagination and emotions. It frustrates and it challenges. It made me think: can I be Scott and make that ultimate decision and wish? Read this, you won't regret it.

By reading any further, you are stating that you are 18 years of age, or over. If you are under the age of 18, it is necessary to exit this site.
Copyright © L.M. Brown 2015. All Rights Reserved, Total-E-Ntwined Limited, T/A Totally Bound Publishing.

Scott Baxter woke with a strange feeling something wasn’t quite right. Half asleep and with his eyes still closed, he tried to figure out what could be different. The bed seemed too soft and far more luxurious than the cheap hotel mattress he vaguely recalled crashing on the night before. A thick duvet covered him and he could feel warmth similar to the heat that usually came from another body close up against him. He couldn’t recall ever waking in a hotel with such contentment as he felt this morning.
After working nearly forty-eight hours straight, he had flown back to England on the red eye, practically sleepwalked to a taxi, and had finally fallen into bed exhausted. Long overdue for a break, he told himself he’d take one after his latest consulting project had been completed. He told himself the same thing every time, even though he knew his boss would have another job lined up for him before the final work had been finished on this one.
“Morning,” a sleepy voice murmured into his ear.
Scott froze. His unexpected bedmate moved and Scott noticed he had some serious morning wood pressed against his arse.
He opened his eyes. Only his companion’s arm wrapped around Scott’s chest stopped him falling out of bed from the shock. Had the relentless pressure of his job finally caused him to snap?
The hotel room had vanished and instead he appeared to be in someone’s house. The drapes over the patio doors had been pulled back and a snow-covered garden stretched toward a frozen pond. Light snow fell from the cloudy sky. The landscape outside the doors seemed more like January than May.
“Scott, are you okay?”
Scott didn’t know what to say. Had he been drugged and kidnapped? And if so, why? He wasn’t anyone important and his family didn’t have the money to pay any ransom.
“Ah good, you’re awake,” a second voice said. Like the first, this voice also belonged to a man, though he seemed to have a slight accent Scott couldn’t place.
Scott wondered how many men he had climbed into bed with last night, before he saw the second speaker stood at the end of the bed with his arms folded across his bare chest. With baggy silk trousers and golden metal cuffs on his wrists, he could have stepped straight out of Arabian Nights.
“What the hell is going on?” Scott shouted as he tried to untangle himself from the arms of the man sharing his bed. His companion wasn’t exactly helping him and instead seemed to be frozen in place like a statue. He poked the man with a finger. His skin felt normal, yet the other man didn’t react at all.
“You’re here to fulfill a wish,” the man at end of the bed told him. “I’m a djinn and I’m here to explain your present situation.”
Scott stopped contemplating the statue man beside him. “Excuse me?”
The djinn nodded. “I’m sure you’ve heard of my kind. We grant wishes to those who summon us. Well, I’m here because someone wished for you.”
A headache started behind Scott’s eyes. He didn’t have time for this nonsense. “I don’t believe in magic.”