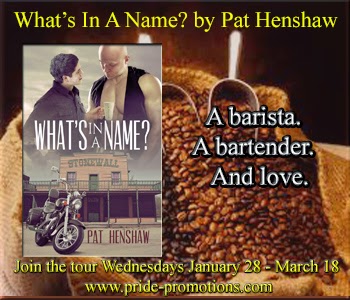 Born in the Heartland of Nebraska, Pat Henshaw has made America hers by living in Texas, Colorado, Northern Virginia, and Northern California.  She has found joy in visiting Mexico, Canada, Europe, Nicaragua, Thailand, and Egypt, and relishes trips to Rome, Italy, and Eugene, Oregon, to see family. Pat has spent her life surrounded by words:  Teaching English composition at the junior college level; writing book reviews for newspapers, magazines, and websites; helping students find information as a librarian; and promoting PBS television programs.Two of her fondest memories are touching time when she put her hands on the pyramids and experiencing pure whimsy when she interviewed Caroll Spinney (Big Bird and Oscar the Grouch).  Her triumphs are raising two incredible daughters who daily amaze her with their power and compassion.  Her supportive husband keeps her grounded in reality when she threatens to drift away writing fiction. 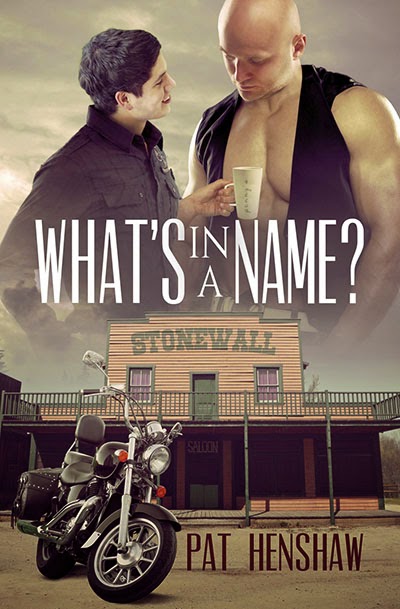 Barista Jimmy Patterson thinks it's a good idea to get rip-roaring drunk on his birthday after he’s dumped by his boyfriend. When the burly owner of Stonewall’s Bar rescues Jimmy, the night starts to look up.
Now Jimmy just wants to know the bartender's first name since he's worn a different name tag every time Jimmy's seen him. "Guy" Stone gives Jimmy seven guesses, one for each night he takes Jimmy out on a date.
While Jimmy’s trying to come up with his name, he's distracted by the destruction of his coffee shop and what looks more and more like a hate crime.


Multitaskingmomma asks: How did you come up with this title?

Funny you should ask.  The first title was "What's Your Name?" and all the files on my computer for the book are in a folder by that name.  At some point during the editing, I made a mistake when I was talking to my husband about the story and called it "What's in a Name?"  The name stuck and became the final title.

Q: When you started this, did you already have the whole story in your head and know what you wanted to title it or was it built progressively and the title came after ?

Most of the time when I write, I have a beginning, middle, and end in mind.  This was one of those times.  For some reason I was thinking about names--probably while listening to the song "Bad to the Bone" by George Thorogood.  I've always thought it ironically funny that a guy named "George" (not a bad-boy given name) with a last name of Thoro"good" (and not just a little good, but thoroughly good) should sing what's become the bad-boy anthem.
So I had the beginning, middle, and end about a guy whose name is so awful that he never lets anyone know what it is--until he meets a wonderful barista with an equally horrific name.  The original title, "What's Your Name?", fit this concept, but the final title, "What's in a Name?", fit it better.

For this particular story, I started playing around with the idea of writing a riff on the Rumplestiltskin fairy tale, and like most of the things I write, I sat down and started typing and the characters and circumstances just appeared as if by magic.  I interviewed Arlo Guthrie once, and he said, when asked where his song ideas come from, that he thinks songs are in the air all around us all the time.  He said he’s just able to hear them and capture them better than a lot of other people.  I’m beginning to believe that’s true for fiction writers too.

The original title of the novella was What’s Your Name? but during the revision process I changed it to What’s in a Name? which is a reference to the Shakespeare sonnet and which reflected what the novella’s ultimately saying.  The sequel to this novella, Redesigning Max, was titled Fredi Went a Courtin’ until right before I submitted it to Dreamspinner Press.  So I rarely submit my writing with the same title I used when writing it.


Review by: multitaskingmomma
My Rating: 3 of 5 Stars
Warning: Possible spoilers ahead. Proceed at your own risk!

I could have rated this lower but for one thing: this was a darned good read and enjoyable. The guessing game was fun, and although Jimmy had guessed it once, he did not realize he had and that just made the fun even funner. Other than this game, this was an enjoyable but quite formulaic read.

So we have a fairy tale story involving two men who fall in love within the week. Although, Stone had secretly fallen for Jimmy a long time ago and just did not let it on to the poor guy. The hints were dropped everywhere though and it was quite obvious he was hooked before they did hook up. All he needed was the right time to step in and he did so when Jimmy's boyfriend dumped him on his birthday and Jimmy got roaring drunk stupid in Stone's bar that same night. Who was to blame the poor bar man when the object of his fantasies suddenly gets single again?

Now for the guessing game: well, Jimmy tells everyone his name is something else but because it is so ridiculous, he just skips on over to his nickname and it stuck. Well, the same goes for Stone, which is really the guy's nickname. It does not help anyone that he wears a different name tag every single night so no one really knows. It is now Jimmy's task to guess what the real name of his knight in shining armour or Prince Charming really is. I told you, this is a fairy tale!

So the angst, yes, this is formulaic, but its a good one. So the ex is stir crazy and does all sort of damage to Jimmy's coffee shop. Yeah, I know. But it still works. Great thing, the author did not do much damage to the story by just making sure this part of the story is not the main focus.

So why do I like this? Well, this was a really fast read and, as I mentioned, the guessing game made it even funner. The rest was just pure entertaining.

Falling in love in your 30s, I'm here to tell you, is the shits.  Take it from me.  You're rolling along, minding your own business--in my case as the working owner of Stonewall Saloon--and then wham!  You think you're immune, especially since you see so many crap-ass guys doing stupid shit every night.  Maybe it's the bar.  Who knows?  I never thought good guys went to bars a lot until I met Jimmy.


Along about November a year or so ago, Jimmy Patterson and his stupid as fuck boyfriend started dropping by Stonewall three, four times a week around 8 or 9 and staying sometimes until closing, but mostly for a couple, three hours.


The boyfriend, this asshole named Alex, would parade in wearing whatever passed as the latest style and park Jimmy on a stool at the bar. 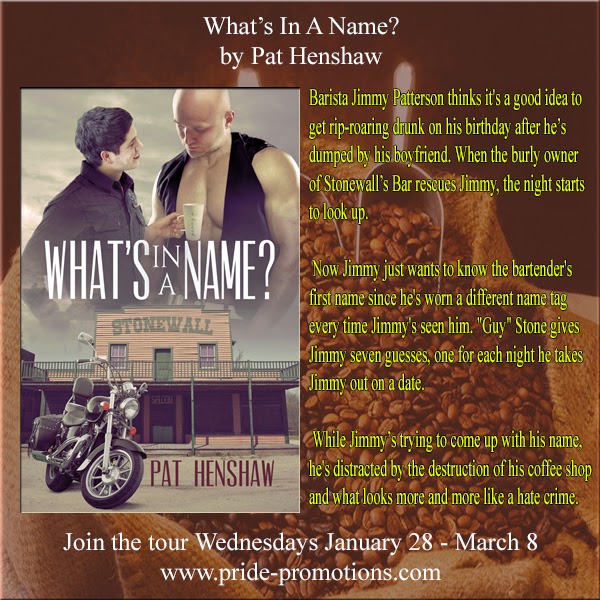 Now, see, Jimmy's the real friendly type.  Shoot, he was even nice to Gus, a regular left over from when my Grandpa was owner and bartender.  Gus can't see or hear too well now and for some reason gets on the nerves of my younger customers all the time.  Mostly because you gotta yell and repeat what you say to him about a million times.  And then he still doesn't get what you said.


Jimmy never blinked an eye at Gus.  Just treated him like all the other guys who sat down next to him to bullshit.


"Good boy, that Jimmy," Gus'd tell me over and over when Jimmy and Dickhead came in.


I had to agree.  During slow periods, Jimmy and I'd talk about all sorts of things.  He wanted to open a coffee shop in Old Town, around where Stonewall is, and asked me questions about places along the strip.  We even talked quarterlies during tax time and shit like that.


There's a few queer-run places now the big city guys have discovered us, and Jimmy wanted to know how they got along.  Yeah, sure, there's some resistance from blowhards like Tommy Thompson and a few others, but mostly we're a live and let live kinda place.


At Christmas we laughed about some of the stupid ass holiday decorations along Main Street.  Jimmy'd even asked if I was going to decorate.  My answer?  Blow me.  For a minute it looked like he considered it.


The more we talked, the more lost I was.  Got to the point I told one of the other bartenders to come get me if I was in the back when Jimmy came in.  Go figure.  Never done that in my life.


In the meantime, every time they were here, Dickhead the boyfriend was making the rounds.  I caught him a few times sucking cock in the back.  Made me so mad I nearly hit him up one side and down the other.  I didn't though cuz I didn't want Jimmy to stop coming in.


It bothered me though.  You know, one of those moral dilemmas.  Should I tell Jimmy or not?  So I started asking around.


Didn't help when I learned Jimmy'd moved into a condo with the Dickhead.  What kind of friend tells a guy his boyfriend's a scumbag?  On the other hand, what kind of friend keeps the news to himself?  Moral dilemma, like I said.


Okay, so we're coming up to Jimmy's birthday, which I know because after I had another bartender card him, I wrote the date down.  I decide to give the Dickhead one more chance.  See if he could man up on the big night.  I knew a bunch of Jimmy's friends were gonna throw him a party at Stonewall, you know try to get him drunk, all the regular crap.  So I'd better be seeing Dickhead stand up and act right.


By that point, I've already been smacked around by Jimmy-love and am ready to beat down walls to make him happy on his big day.  He's never gonna see his 20s again and he's feeling the pain.  At least that's what he's said.  I just want the guy to be happy, real happy.


What happened?  Well, yeah, you gotta read Jimmy's side of the story.  I mean, don't listen to me.  I can't tell a story about love.  Shit, I can barely tell a clean joke.  Just listen to Jimmy.  He's got it covered. 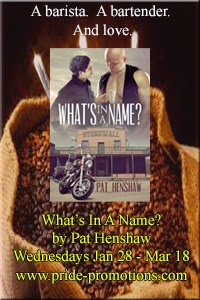