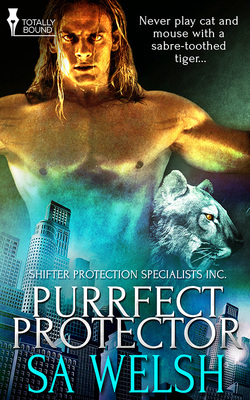 
This is book one in the Shifter Protection Specialists Inc. series, see the full series listing here
Never play cat and mouse with a saber-tooth tiger.When Kale Andrews gets disturbing mail from an obsessed fan, his brother drags him to Shifter Protection Specialists, Inc. Kale reluctantly agrees to have a bodyguard, but when a tall, muscular blond walks into the office emanating power and a sexy dose of danger, Kale’s doubts about needing the man with him twenty-four hours a day quickly disappear.The easy babysitting job Aleksi was promised quickly changes from strange mail to threatening deliveries, so Aleksi has to become creative to keep his protectee out of danger. Everyone knows models are self-centered and shallow, so why does being with Kale make him feel like he finally has a home? Since he’s a saber-tooth tiger and naturally dominant, most people aren’t strong enough to be with him in a relationship or even as a friend. Yet Kale seems to calm his beast, simultaneously exciting the man in Aleksi.Neither man expects nor wants a relationship with strings, but as they grow closer, Aleksi realizes that Kale might be his mate. With an obsessed fan escalating toward murder, Aleksi isn’t sure that even his tiger can keep his mate safe.

Don't shoot me, but I really found this a cute little story even if the subject matter is one humongous sabre toothed tiger and a male model who was larger than life. Oh, and there was the stalker who just would not give up.

So Kale Andrews receives not just a disturbing mail from a stalkerish fan, he receives an eye in a box. His brother, who also is his boss and agent, takes the mail as it is, dangerous, and so hires a protection agency staffed by shifters. ..... brakes! yes, this is alternative universe where shape shifters live openly and alongside humans....

As the subject of a stalking, Kale is not really feeling the danger until he meets Aleksi, the six foot ten ginormous hunky hunk of a man who is now his body guard. Although it should scare him, this sabre tooth tiger does not and so makes Aleksi stop to reconsider his initial frustration and think that maybe, Kale is his mate? He's not sure but his tiger is purring....

Thing is, there is the usual primeval cry of MINE! in the claiming thingy, but the story does not follow the formula. The author instead chose to give the two men involved the chance to step back and reconsider their circumstance and take things slowly. They have to make sure. I mean, yeah, I would too if the tiger goes on its hind legs and reach the second floor. Plus, think: smaller man, bigger man with big (make that: massive) parts. But I digress...

Now why did I like this? It's strange but I did find this a cute story and there were a lot of lighthearted parts that sent me to giggle-land. (I am with TracyG. on this one :D) Also, the writing style is so relaxed it was surprising to find I had reached the end.

And wow, that was a beautiful set up if I may say so.

Yes, I am definitely following this series. I am curious now what happens next.

By reading any further, you are stating that you are 18 years of age, or over. If you are under the age of 18, it is necessary to exit this site.
Copyright © SA Welsh 2015. All Rights Reserved, Total-E-Ntwined Limited, T/A Totally Bound Publishing.

Note: Copy provided by publisher in exchange for an honest review.