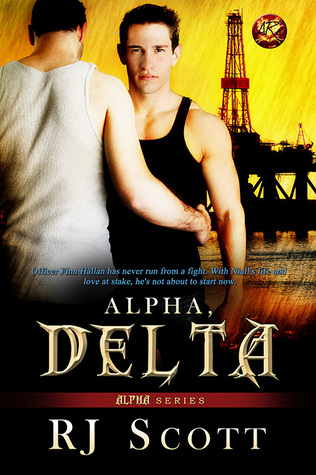 An ARe Alphas Release!
Officer Finn Hallan has never run from a fight. With Niall’s life and love at stake, he’s not about to start now…
Finn Hallan is a member of the elite Norwegian Emergency Response Unit, code name Delta. When the team is sent to respond to a hostage situation on an oil platform in the Norwegian Sea, he has to face demons he thought he had buried a long time ago.
Scottish engineer Niall Faulkner’s skills in oil platform decommissioning takes him to the Forseti platform at the worst possible time. When he’s captured by terrorists, his only thought is that he will never get to tell his lover how he really feels.
Can Finn keep Niall alive? Or will they both die at the hands of hijackers in the frigid waters of the Norwegian Sea?

Review by: multitaskingmomma
My Rating: 4 of 4 Stars
(Based on Short&Light Read)

This was a really fast read and finished this in just one sitting. Yes, it was that fast and the story was super fast paced. Fortunately, this is written by RJ Scott so all the elements are present and accounted for: romance, erotica, men, gorgeous men, glasses, alpha men, and smaller men. Oh yes, there is the drama of the terrorist attack on an oil rig. Yes, this is trully a fantabulous story, but heck, it is one enjoyable read I just lost myself for an hour and came out grinning.

We have alpha male, Finn Hallan, an Englishman in Norway, working as an elite private soldier for an oil firm that needs highly advanced and learned security force men to protect their rigs in the high seas manned by highly trained employees that range from the nerd to the nerdier. This is where we see Niall Faulkner.

Niall is a Scott and he's gorgeous and a super nerd of an engineer whose job it is to make sure the decommissioning of a rig in the high seas go smoothly and eco-friendly. Oh, and secured. It was in a seminar where he gave a talk that he met this giant of a man, Finn, and their affair began.

It is a few months later and we see Niall off to decommission a rig when the terrorists come in and makes a dramatic, and highly dangerous, entrance. It is up to Niall to keep himself alive and communicate with home base. He has to stay alive, he wants to see Finn again and maybe ask him if they can take their relationship one step higher.

Finn finds himself a rescuer but his heart and mind are not focused. All he knows is that he does not do love, nor relationships, but the thought of losing Niall nearly drives him off his game. He has to focus on saving his Niall or loose everything.

Sounds romantic, right? You bet it is and this is so fast paced and confusing in the turmoil of thoughts and action, I came out gasping for air. Not so much Rambo but one more step and that could have been it.

Another entertaining read from an author who knows how to get our pulses racing.

Posted by multitaskingmomma at 5:17 AM