K.A. Merikan is a joint project of Kat and Agnes Merikan, who jokingly claim to share one mind. They finish each other's sentences and simultaneously come up with the same ideas. Kat and Agnes enjoy writing various kinds of stories, from light-hearted romance to thrillers. They love creating characters that are not easy to classify as good or evil, and firmly believe that even some villains deserve their happy endings. It is easiest to find them in galleries, good restaurants and historical sites, always with a computer or notebook, because for Kat and Agnes, every day is writing day. Future plans include lots of travel and a villa on the coast of Italy or a flat in Paris where they could retire after yet another crazy venture, only to write more hot homoerotic stories.
Kat and Agnes started as popular authors of online serials written in their native language, but are now focused on reaching a wider readership by writing in English. As K.A. Merikan, they have published a number of books, which cross genres while always staying homoerotic.
We have always valued the feedback we receive from our readers, so if you have any suggestions, comments or questions, do not hesitate to contact us. 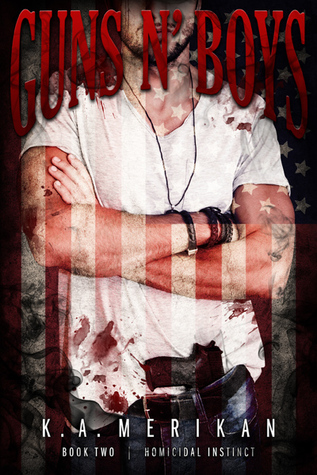 All Seth wants is to live free with the man he loves. But escaping death at the hands of the mafia is just the beginning of an uphill struggle. When Domenico wakes up from his impromptu surgery and doesn’t even remember Seth’s name, Seth’s world falls apart. Suddenly it’s him who has to plan an escape from New York City and navigate their way to Mexico. All that without even knowing if the man of his life will ever love him again.

Domenico doesn’t know who to trust and what to believe. The man who introduces himself as his brother seems to hide dark secrets behind a cheerful smile. With the mafia breathing down their necks, there is no time to piece together the puzzle of Domenico’s life, and each time he thinks he’s solved it, a new part appears to be missing. Dom needs to find out who he really is, what he’s capable of... and what is the real story hidden behind Seth’s intense eyes.

I literally inhaled the text off this book and finished in one sitting. Yes, it is that GOOD and HOT! This is the perfect followup to the Guns n'Boys series.

Dom wakes up and has no memory of who he was or who Seth is. Instinctively, he trusts Seth and believes him when he is told that they are brothers. Then the bitch-slap-queen-fight over the dinner table happened... and the road trip that takes them out on an adventure Dom is seriously questioning.

Why is everyone running after them? Why is Seth so protective of him and yet keeps secrets? Why are bullets flying when they are found out? Why is he feeling un-brotherly and lustful feelings for Seth?

Questions run through Dom's mind and he finally gets answers in ways he did not expect but also felt he should have expected. You see, he has no memory of who he is but his muscle memory, now that was a different story altogether.

So the bullets fly, the knives kill, harm and maim, and people from the past appear seemingly out of nowhere and all Seth could think of is: what's next for dinner?

There were moments I found myself cringing at the violence that is the spirit of this series and yet, I found myself laughing out loud at the follies these two men meet. Like, 'here piggy, piggy!' hehehehehhee BOOOOM! bwahahhahahahaaa

If you have not read this series yet, pick it up now. It's an adventurous read that crosses all borders ~ but not necessarily taboo.

Note: Copy provided by authors in exchange for an honest review!

Posted by multitaskingmomma at 5:36 AM