REVIEW REQUEST: Shift in Time (Out of Time #1) by Mercy Celeste + Author Giveaway 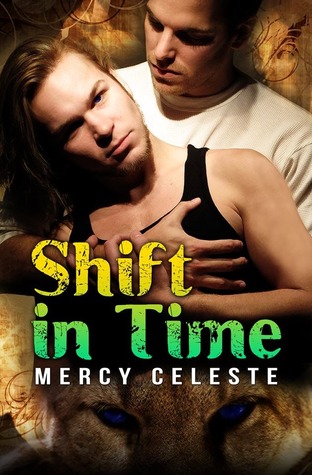 
Mercy Celeste is the pen name and super hero persona of mild mannered MJ Colbert....which is bull, I'm not mild mannered. I was, in fact, raised in a barn--or several. We even had grain silos. My motto growing up, anything a boy can do, I'm right behind him doing it just as well or better. I've broken too many bones to begin to count. Scraped, skinned or scarred pretty much every thing that can be scraped, skinned or scarred. How I'm still walking and talking is a miracle.
I'm from Florida but I live in Alabama, I think I'll just start saying I'm from Florabama and be done with it. I'm a rebel supporting the Florida State Seminoles in the land of the SEC. Roll Tide, just not at my house. I married the love of my life (I say that now next week it might change) when I was 19, I've been stuck with him almost 24 years now. We have four kids. My oldest is 21 my youngest is 6. I dabble in furniture restoration and quilting. I attended the University of South Alabama, here in Mobile, for about six years, and never graduated. I studied things like Early Childhood Education and History when I should have been over in the business department. But it wasn't time wasted. I met my best friend there. I learned how to research. And found out that I have no interest in one subject enough to actually major in it. Jack of All Trades master of none, that's me. I've worked in a sewing factory, as a pizza delivery driver, waited tables and in retail, with a three day stop at Florida State Hospital (the state mental facility) before I hightailed it home in absolute terror.
I spend my non-writing time chasing kids across this city. I have two Maine Coon cats who have no idea that they're cats. Some days I'm torn on whether they are dogs or human, depending on what they've destroyed and how much it meant to me.
I live a small life, but it's full. Usually full of laughter, and bullshit. But sometimes the bullshit is what makes the laughter. I'd not change a thing, even the bullshit.
So about the writing, well, I don't really consider myself to be a writer. I'm a storyteller, and when I have a story to tell, it won't rest until it's twisted me up and purged itself. The result is at times comical or tragic, depending on the people who live in my head and what they have to say. Most days that's not a lot of anything. Others I can't shut them up. They especially love when I'm driving, oh, yeah, a drive across town is a lesson in how not to get myself killed or pulled over for reckless driving. And those are the good days.
Welcome to my crazy world, if it's boring now, wait five minutes, and don't blink. Things have a tendency to get interesting around me.
Mercy Celeste

Book 1 in the Out of Time Series
True love’s first kiss will not break a curse.
Everyone knows that. Even a Normal like Morgan Monstros knows that.But Fane Llewellyn isn’t everyone. He’s like no one Morgan has ever met.Small, fragile and fierce, Fane doesn’t remember who he is or where he came from. He remembers pain and loneliness. Decades of pain and loneliness. And Morgan Monstros. He could never forget Gan. Gan was his from the day he came to the island. And Fane would fight to the death to keep Morgan safe. Even if he has to fight the whole world to do it.Take one powerless witch, a sassy Siamese familiar, a panther shifter with amnesia, a meddling wolf clan, and a coven of witches hell bent on war, swirl all together and you get the perfect spell for all out mayhem…..oh yeah and there’s chocolate cake too.

There is a whole lot of story going on in this book and it sets the foundation of what could be an astounding piece of fantasy/paranormal/shape-shifter series. This is the first book of the Out of Time series and in this one, there is a strange warp in time and dimension going on.

Fane Llewellyn was destined as the alpha of his wolf shifter clan being the first son of the first son of a first son. As the alpha power moves forward for each succeeding alpha, each becomes more powerful ~ or I think it does. In any case, Fane was destined as the most powerful of the alpha-to-be but just like that, he is torn from his people, torn from his time and dimension, and worse, torn from his life as a human. With him was his chosen mate and lover who dies to protect him. What happened, Fane has no memory of. He only knows he is a Siamese cat that has been around for quite some time, with the same family. Out of all those humans he lived with, only one boy he could tolerate and love the scent of. Out of all the humans, it is this boy he never could forget.

Morgan Monstros was gay and he knew his 'predilection' made him an outcast of sorts. To stay alive and within his witch family's embrace, he agreed to sign a contract of celibacy. A contract he knew he signed in blood so could never renege on. Question is: why can't he remember doing it and why did the council have to make him do this at such a young age? Curious.

On a night that spelt lightning and storm, this powerless and celibate witch touches the cat he baby sat for his sister. In one bolt of lightning, the life of Morgan and Fane shifts in both time and mind and all things they knew as truth suddenly turns out to be lies and full of deceit and betrayal. Why? They know not. The only thing they do know is they are the destined mated pair and they cannot live without the other. The other thing they know is they are now being sought by the council to try and maybe killed. The result? After hundreds of years of war and hate, witch and were family unite to save their family and a war that can end all wars is about to begin.

This is not a formulaic shape shifter story, even if it sounds like one. This surprised and delighted me no end and yes, I finished in a flash. Although this was lengthy and has a whole lot of details that I may have missed some important stuff. All I need to do now is read this again for it does make for a great second or even third read.


Note: Copy provided by author in exchange for an honest review.

To get a chance to win an ebook copy of Shift in Time (Out of Time #1) , leave a comment below and don't forget to leave your contact email address.

We will randomly pick 1 lucky commentator and Mercy Celeste will email them their ebook version of choice.

Posted by multitaskingmomma at 9:04 AM