Review: Run With the Moon (Valen's Pack #1) by Bailey Bradford 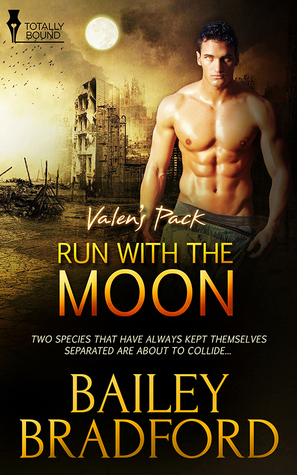 Two species that have always kept themselves separated are about to collide and create a new world.
Humanity almost managed to do itself in. Ravaged by wars and plagues, the human population on earth has been bordering on extinction, although pockets of people have been forging on over the past few hundred years. It’s a hard life, and one Aaron Olsen fears he doesn’t fit into. As a son of a village leader, there are pressures on him he can’t manage, and things he keeps hidden, desires he doesn’t know how to express that keep him up many nights as he worries over them.
Valen is an alpha, born with the crescent moon mark on his chest. It means he’ll have to leave the pack he was born and raised in. It is the way of the wolf, and the only way to prevent it is to fight his father. Valen has no intention of doing such a dishonorable thing. He leaves as he’s supposed to, only to find himself the victim of thievery. When he hunts down the party responsible for stealing his belongings, Valen finds himself attracted to the human Aaron Olsen.
Now, if they can only survive their own pride and insecurities, and an attack that threatens everything they love, they just might have a chance at happiness in Valen’s Pack.
Reader Advisory: This book contains scenes of light BDSM.

After a series of unfortunate, man-made, events, the humans are finally on the verge of extinction and are living in a bold new world dominated by shifters. In this dystopic world of an aftermath, the seemingly indestructible shifters are now living side by side with the weaker humans. It's a very dangerous place they now live in and nothing of the modern world we know and are familiar with remain.

Valen comes from the shifter line and despite him being a younger son, he bears the mark of the alpha and so, according to the custom, must adhere to their society's norm and either fight his position to the death with his father or present alpha or choose the noble way and leave the family he grew up in and start his own pack. He chooses the lesser of two evils and turns his back from the only life he knew to venture out into the unknown.

Where a human steals his backpack. And sets into motion a series of events that change both their lives forever.

Aaron is a human, puny and weak compared to the shifters. When he chances upon a shifter, he never in his wildest dreams thought he would get into a position that raised a lot of questions and bring about bigotry. Bigotry of men loving men, and shifters hating humans.

So there is a whole lot of erotica going on here, even happening when the going is at its toughest. Yes, the scenes were well written and the obligatory claiming was present and accounted for, but it distracted from the development of the plot to such an extent that I question the logic of going through them in the middle of an emergency.

That said, this was a nice page turner for the dystopic world changes a lot of preconceived notions on pack mentality and dealing with humans who wreck havoc wherever they manage to crop up. That the mating happens between human and shifter is nothing new to me and I did like the part where the choices Aaron and Valen had to make brought about a shift in the plot that made it actually work.

Posted by multitaskingmomma at 7:00 AM