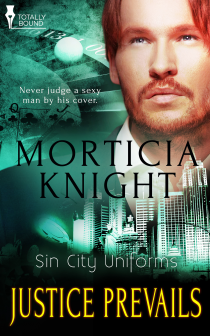 This is book three in the Sin City Uniforms series, see the full series listing here
Never judge a sexy man by his cover. Detective Beau Williams is hardworking, dedicated and professional. He enjoys the finer things in life, but with his heavy caseload that includes what Beau suspects is a new serial killer, he has no time to enjoy much of anything. What the tall redhead needs is someone to shake him up a little. Investigative Technician Austin Kent never met a snarky joke he didn’t like—or a set of stairs that couldn’t trip him up. One night after a devastating episode at work, Austin sees something else he likes—the handsome detective he’s seen around the station whom he’s always wondered about. But after he makes a drunken fool of himself in front of Detective Williams, he’s sure there’s no hope. Beau and Austin’s worlds collide when Austin is sent to pick up some evidence at the station. Amidst a myriad of twists and turns in the troubling serial killer-style murders of Vegas conventioneers, Austin and Beau discover that there’s more to the other than they’d originally thought. There might even be more they’d like to give—unless the killer has the final say. Publisher's Note: This book is best read in sequence as part of a series but can be read as a standalone.

Austin hides behind a mask. He makes jokes, he is the life of the party and he is fun. What no one sees is the pain he bottles up and the helping hand he offers the less fortunate. No one gets to see his fascination with a certain Detective Beau Williams who works in the very place he delivers or picks up evidence for.

Beau sees Austin drunk and inconsolable one night and wonders at the man's pain. He is surprised when he could not stop thinking of the man. He is more surprised when he finds out that Austin helps him on his quest to finding a serial killer.

The two men become friends first then lovers but this is glossed over so kind of reads fast and rushed. I really don't mind for I got to enjoy the two men's relationship faster. Add in the erotica, and well, blushing is a mild adjective.

The Sin City Uniforms is one of my favorite Crime, Mystery series and the way Morticia Knight does it, one is never left unsatisfied. The romance is hot, the action is fast, the pace is even faster, and the plot develops really, really well. Of all the books in this series, this is the most light hearted of them all despite it having the weirdest, nastiest and most disgusting fetishes I had ever come across. But I will zip my fingers to a halt now, for fear of leaking more spoilers. Just know: this is a great read and should not ever be missed. For those who love Ms Knight, there is absolutely no regret in the reading. Just a regret that it ended so soon.


By reading any further, you are stating that you are 18 years of age, or over. If you are under the age of 18, it is necessary to exit this site.
Copyright © Morticia Knight 2015. All Rights Reserved, Total-E-Ntwined Limited, T/A Totally Bound Publishing.