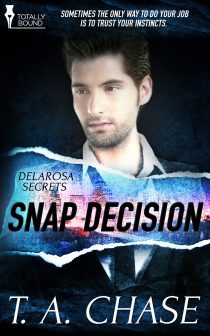 This is book two in the Delarosa Secrets series, see the full series listing here

Sometimes the only way to do your job—and discover love—is to trust your instincts.
D’Marcus ‘Snap’ Jefferson is a DEA agent who has worked hard to keep drugs from hitting the streets of Houston. So when Kenneth Santos walks in, claiming to have information about an upcoming drug shipment, Snap must make the choice whether to trust the stranger or not.
Kenneth Santos is a recovering addict and ex-con trying to clean up his act. Some mysterious informant has chosen him to act as the go-between with Agent Jefferson. It’s a precarious line Ken must walk because his life could be in danger if the cartels discover he’s working with Snap and the DEA.
Neither man expects to fall in love while playing such a dangerous game. Yet Snap always trusts his gut and it’s telling him that loving Ken could be the best decision he’s ever made.
Reader Advisory: This book contains scenes of torture.

The Delarosa Secrets quickly became a series that I must continue to read, by hook or by crook. The characters are flawed and not the regular fairy tale romance types and so should not be the typical main squeezes. Fortunately, they are just the perfect characters that makes this series very interesting. Add in some characters that should never be considered as heroes but are, this makes for an even more fascinating read.

Kenneth Santos is a very broken character and had lived a harsh life with his past drug addiction and involvement in illegal drug trafficking. A stint in jail and getting abused behind the bars was not enough to make him change his ways, but something does make him rethink his life. As he works hard to keep clean and stay out of trouble, an unexpected handler comes in and pulls his puppet strings. This leaves him with no choice but to dance to the tune of a cold killer who is out to destroy two rivaling drug cartels.

D’Marcus ‘Snap’ Jefferson is the law abiding officer of the pair. He is dedicated to ridding the streets of drugs and pushers but is resigned to reality that there is only so much he could do. When Kenneth requests for his presence as he has information only Snap should hear, there is curiosity and confusion. Why only Snap? What interest does this individual have of him and/or his family? More questions rise when Kenneth gives information that is not only right, but he has more.

As Snap, his partner and friends try to connect the dots, Kenneth knows his time alive is getting shorter. He does not hesitate to enjoy himself with Snap and fortunately, Snap is not saying 'no' either. Their relationship is questionable but then again, Kenneth's background may just hold the secret to the Delarosa cartel.

As the lives of Kenneth and Snap get more complicated with the puppet master, Victor Delarosa is exhibiting a change that his right hand man could not define. Will this endanger their cartel? How will this change affect  Tanner Wallace and Mac Guzman's lives?

More secrets rise from the questions answered. The mystery of the puppet master is getting deeper. Of course, this leaves me wondering, what will TA Chase write of next and will it involve Victor? I do so want it to happen, for anti-heroes like the men in this series just manages to make this a very, very interesting read.