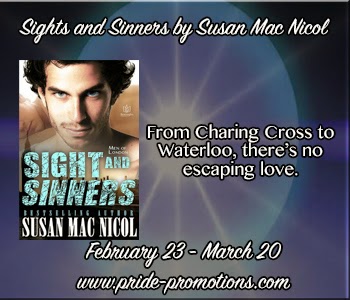 Susan Mac Nicol is a self confessed bookaholic, an avid watcher of videos of sexy pole dancing men, self confessed geek and nerd and in love with her Smartphone. This little treasure is called ‘the boyfriend’ by her long suffering husband, who says if it vibrated, there’d be no need for him. Susan hasn’t had the heart to tell him there’s an app for that…
She is never happier than when sitting in the confines of her living room/study/on a cold station platform scribbling down words and making two men fall in love. She is a romantic at heart and believes that everything happens (for the most part) for a reason.She likes to think of herself as a ‘half full’ kinda gal, although sometimes that philosophy is sorely tested.
Lover of walks in the forest, theatre productions, dabbling her toes in the cold North Sea and the vibrant city of London where you can experience all four seasons in a day , she is a hater of pantomime (so please don’t tar and feather her), duplicitous people, bigotry and self righteous idiots.
In an ideal world, Susan Mac Nicol would be Queen of England and banish all the bad people to the Never Never Lands of Wherever -Who Cares. As that’s never going to happen, she contents herself with writing her HEA stories and pretending, that just for a little while, good things happen to good people. THE MEN OF LONDON  From Charing Cross to Waterloo, there’s no escaping love. SEEING THROUGH…

28-year-old Draven Samuels has a tragic past, but as an investigator with a high-profile London company he now gets what he wants. Tough, sarcastic, and sceptical, he has no patience for lies and even less for people who waste his time. Even if they’re as beautiful as the wild and dark-haired Taylor Abelard. Especially when they’re talking over the body of a murder victim.

Psychic Taylor Abelard is used to people calling him a freak. He can see past events and feel the ghostly vibrations of people close to him who've passed on. It’s why he doesn't get too close to the living. But this time, against his better judgment, despite Draven’s mocking rejoinders, Taylor will get closer than ever before. The mystery surrounding a dead friend will lead the two men down a dark and seedy trail of blackmail and lies. Add in the heartbreak of a family tragedy, and events lead them straight into each other’s arms. By the end of this night, all their demons will have risen—and been banished with the dawn.

One phenomena that still boggles my mind is the ability to see into somewhere and somewhen without benefit of technology. We call it the 'sixth sense' while others simply call it quackery. Well, there are undisclosed, undefined and inexplicable phenomena that happen every day and Taylor Abelard lives with it. You see, he is a psychic and he sees the ghosts of people he knew who had died. Most times he sees the possibility of a future event that may not be good to those he may not know but are friends with those who are close to him. It is a difficult life and holding such a talent is not really seen as sane or normal. As a homosexual man, he already has enough problems with how society sees and defines him. He does not need to feed them fuel to light him to flames.

Draven's life is not something we would like to experience but he lives it every day. He tries to make the right decisions through educated logic and reasoning but his feelings get in the way. He sees life as a series of dos, don'ts and resulting complications. When he meets Taylor for the first time, it involved the murder of a young child. Being paired with a so-called psychic did not help matters and so, the encounter was memorable, but not in a good way. Now, they are together once more and difficult as it may be to accept, Draven has to work with Taylor.

Taylor and Draven try hard to work together but it's very difficult, and that is saying it mildly. There is dislike, there is contempt, there is speculation bordering on the ridiculed and all that nasty stuff. Fortunately, the tides turn in their favor but it is not filled with sunshine and roses either. There are some really tragic things going on around here and somehow, through all the misundersandings and hard feelings, Draven sees the real Taylor and vice versa. When Taylor realizes that his dreams are no longer just limited to the case they are trying to unravel, Draven is caught between his developing deep feelings for Taylor and his guilt. Will they find the means to meet halfway, or will they need the interference of Leslie and Eddie? Will their involvement even help?

This is another brilliant story from a fantastic storyteller who just does not know how to stop telling stories. This is the second part of The Men of London Series and should really be read in order to be appreciated, although both books are stand-alones. We met Taylor for the first time in Love You Senseless as well as Leslie, two best friends and roommates of Eddie. Draven has to figure out a way to get through the walls that are Eddie and Leslie. He will have to learn that to get to Taylor's heart and be complete, he has to show these two that yes, he is there for the long haul and that he is accepting of Taylor's talent. He has a long way to go and that is an adventure that should not be missed. 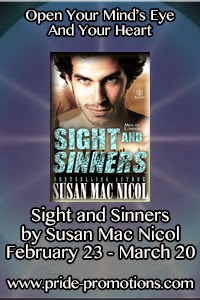 10-Mar
Wake Up Your Wild Side