Victoria was born in the United Kingdom but emigrated to the United States at age 21. She’s bisexual, genderqueer, happily married, and still shouts in a British accent. She lives with her husband in Pennsylvania where she spends a lot of time playing and talking about video games, especially Japanese role-playing games.Besides the Culture Wars series, she is the author of Wings of Destruction, an asexual m/m romance novella published by Less Than Three Press, The Miracle, an f/f short story published by Evernight Publishing, and the forthcoming m/m romances Nami (Wilde City Press),  The Dragon’s Curse (Less Than Three Press), and The Forbidden Zone (Less Than Three Press). She loves to write about all colors of the rainbow and celebrate love wherever it may be found. 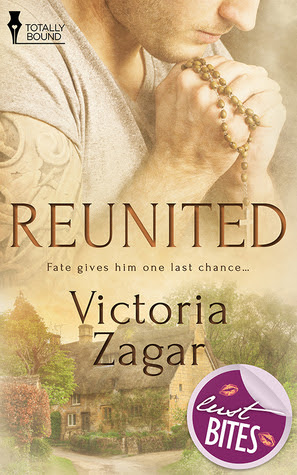 Peter had thought that Oliver was gone forever, but fate offers him one last chance to reunite with the man he loved and lost.
Peter’s undergoing chemotherapy for cancer. Dazed and confused, he finds himself at a community center he once frequented a long time ago. Going inside, he meets his old friend Oliver. There’s one problem—Oliver’s been dead for twenty-two years, lost to the ravages of AIDS in 1992. Suddenly the impossible has become possible, giving Peter a second chance with a man he had thought lost to him forever.
Peter finally admits his feelings for Oliver, long hidden beneath layers of denial and grief. Oliver owns up to the reckless mistakes he made in life, the drugs and casual sex that led to his untimely demise. Unfurling the mysteries of how they have come to be reunited, Peter and Oliver embark on a weird and wonderful journey through their past and present lives, embracing the whirlwind romance they could only dream of when Oliver lay dying.

What if you were given the chance to make it up with someone you dearly loved but lost all those years ago? If you had the chance, will you take the leap and face death to be with that someone you loved?

Peter got that chance. He had lost Oliver way back in the 1990s to HIV/AIDS and lived to regret to the last of his days that he never told Oliver about his love for him. He had lived in the times when being gay meant death in some countries and a whole lot of persecution in others. Now, in this place where he could just be with Oliver for the rest of his time, he has the chance to make amends. To face the consequences of their young and past decisions. To make up for lost time. To just finally be with the man he loved.

In just a few pages, Victoria Zagar gives us a glimpse of what love could be on the other side. This is not a tear jerker, neither is this a ghost story. It is just a story of how two men missed out when alive but now have the chance to make up for it. For eternity and in love.

Ever want to read a light, short, and totally awesome feel-good read? This is it. Reunited is just marvelous.

Peter walked along High Street as if he were wandering through a dream. Everything seemed a little hazy, and he wasn’t exactly certain how he had gotten there. It had to be the chemotherapy. The side-effects were so much worse than the doctors had told him they would be. The nausea, dizziness and wasting away reminded him of something someone else had gone through, but he couldn’t remember who, when or why. He was probably just making his way home from the General Hospital after another session. He’d gotten a little lost and confused, but it wasn’t the end of the world. If he could just get back to his car, he could drive home and have a cup of tea. Everything would be all right.

He walked up through the children’s playground until he reached the car park. It was packed to bursting, as usual. Parents and children made their way into town, filling the crowded walkways with chatter. The shopping center was no doubt bustling. The community center sat on one side of the car park. It had been built in the 90s. Peter remembered how he had once spent many afternoons there—for what reason, he didn’t remember—but he felt an inexorable pull toward it, as if many more afternoons in good company awaited him there. He shrugged and headed that way. His daughter Patricia wasn’t expecting him home for a little while. She wouldn’t mind if he dropped in on old friends for an hour or so. With age came the ability to indulge in small curiosities, thoughts he would have tossed aside in the urgency of youth.

He saw a phone box sitting outside and gave it a quizzical glance. Not a red telephone box, but the kind that British Telecom had installed later on, all glass with their logo printed on it. He hadn’t seen a phone box in years. What with mobile phones, nobody used phone boxes anymore. It stood empty, of course. Why anybody would want to use such a relic was beyond him. Maybe the community center kept it as a keepsake of sorts, out of sentimentality for a simpler time. Peter could agree with that. He was prone to bouts of sentimentality himself, especially of late. Dying tended to make one reminisce.

Led by curiosity, Peter pushed open the glass door that led into the center. It was just as he remembered it. Children’s art decorated the walls, and a color scheme of brown and darker brown was the extent of its design. Polished cream-colored floor tiles squeaked underfoot. In the main room, older people gathered around tables. They sat in brown chairs playing cards and drinking beverages from the tuck shop ran by the tea lady, Lesley. She looked just as Peter remembered her. She had long, platinum blonde hair, and always a smile on her face at any hour of the day.

A familiar voice pulled Peter from his reverie. He turned to see who was calling him, and his heart squeezed so tightly in his chest that he thought he might be having a heart attack. He stumbled over to a table, slumping down into a chair before he could fall.

“Easy there, Pete. Can I get you a cuppa?” The man’s hair was all gray with the occasional streak of black. He looked like an older version of someone Peter had once known, but that was impossible. He shut the thought down at once, along with the spark of attraction that seemed to accompany it. No doubt this was his friend’s father. Perhaps they could talk about his son, Peter’s once dearest friend. Oliver. Such a stupid name for such an unpretentious man. Kids who knew his name used to beg him for more in the street, as if they thought they were clever. Oliver never held back. He always told them to ‘bugger off’ without a thought that their parents might be close by.

“That would be lovely,” Peter said. The ache in his chest lifted like it had never been there. Oliver’s father returned to the table with two cups of tea carefully balanced in their saucers. Peter took two sugar cubes out of the cup in the middle of the table and dropped them in his tea. Milk was a given. Leslie would have had a fit if anyone had claimed not to want it.

“How have you been?” Oliver’s father asked.

“Oh, lovely, you know. Takes more than a little cancer to stop me.” Peter stirred his tea and took a sip. Perfect. “How about you?” He didn’t want to admit that he didn’t remember the man’s name. Oliver hadn’t talked at length about his father. From what he had gleaned at the time, the two didn’t speak much.