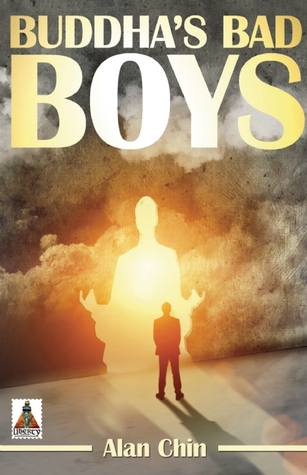 
There are many reason why Western men turn to Eastern religion—searching for inner truth, lost love, loneliness, fleeing the law, hopelessness, alcoholism. Some travel halfway around the world in an attempt to overcome their particular dissoluteness, only to realize that improving yourself is like polishing air. What they eventually discover, nevertheless, is one of the Buddha’s most significant lessons: enlightenment comes to those whose singular focus is on helping others less fortunate.
Six stories, six gay men trudging down the road to enlightenment. What they each find is the last thing in the world they expected.

Before I begin this review, I have to say that I personally didn't like any of the character in these stories. They reminded me too much of the hippie crowd back during the Vietnam era. People who didn't really know what they wanted, but they wanted it so badly, that they would grasp at any straw, however ridiculous.

Buddha’s Bad Boys is a collection of six short stories, as follows:

This is the story of Reece and Darren who, along with their seven-year-old son Archer, are spending an extended vacation as monks in a Buddhist monastery in Thailand.  Neither of the characters are particularly likeable, and the story contains numerous long paragraphs of exposition.  Darren is apparently having an affair with a young novice, and Reece becomes fascinated by and, evidently infatuated with a wanted murderer.

If you like that sort of thing, you will enjoy the story.

A defrocked priest escapes from a yacht full of people who want to string him up because he’d had sex with an almost eighteen-year-old.  He’d intended to kill himself when he jumped overboard, but washes up on a beach instead, and is given refuge by Buddhist monks in a monastery.  This short story contains most of the elements of Tennessee Williams’s “Night of the Iguana,” but little of its charm.

This is the story of Philip Mann and his son, Tru Mann.  Philip was a fireman who answered the calls to the World Trade Towers on 9/11/01, and was so affected by it that he eventually left his wife and young son, and escaped to a Buddhist monastery.  The story begins with the son, now ten years older, but not yet an adult, tracking Philip down in the monastery.  He learns from his son, that the boy’s mother recently committed suicide by jumping from a high-rise window.  The son is now in the care of his maternal grandparents, who committed him to a facility dedicated to reversing homosexuality in males.  Philip returns to the States with his son long enough to gain guardianship of him, and to evict the grandparents from his apartment, where they’d been sucking the boy’s trust fund dry.  This is the most interesting of the six stories, and I won’t reveal any spoilers.

This is the story of Palmer, who on his birthday, decides to leave his job and family, and accompany a coworker who has just been diagnosed with a terminal brain condition to Thailand.  The coworker is the boy Archer from the first story, all grown up and ready to return to the monastery he’d once lived in with his two dads.  The story does not end well for either man.

Martin Braxton is being allowed to stay at a monastery as a helper, while he attempts to patch things up with his boyfriend, who is now a monk, or a monk in training.  After a long and tortuous journey together, when the story ends, the two men are on the verge of perhaps getting back together, perhaps not.  This reader wasn’t certain.

This is the story of a mahout - a caretaker of elephants - who, with Archer from an earlier story, and one of the monks from an earlier story, set out to rescue Philip Mann and his son. They are political prisoners in nearby Myanmar.  In keeping with the tenor of most of the other stories, this one does not end well for anybody.

This book was a difficult read for this reviewer, mainly because of the long paragraphs of exposition, and the general level of angst and suffering experienced by the characters.  Alan Chin is a well-known writer, and if the writer had been anyone other than him, the book would have been rated less or would have just failed. Thankfully, the author is who he is and made this quite an interesting read. These stories are said to have some autobiographical elements in them. Maybe the point is this:  "Life sucks." Otherwise I have no idea.

All that said, even though it’s not my cup of tea, I realize that the opposite will be true for readers who like that sort of thing.  And, it’s fairly well-written, so I’ll give it four stars out of five.


Posted by multitaskingmomma at 2:32 AM