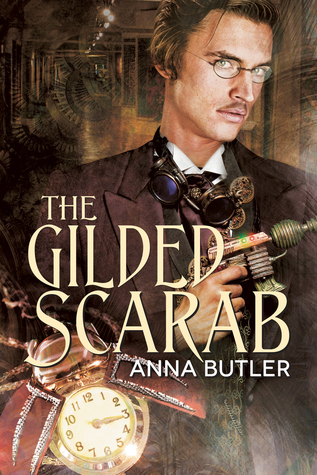 
When Captain Rafe Lancaster is invalided out of the Britannic Imperium’s Aero Corps after crashing his aerofighter during the Second Boer War, his eyesight is damaged permanently, and his career as a fighter pilot is over. Returning to Londinium in late November 1899, he’s lost the skies he loved, has no place in a society ruled by an elite oligarchy of powerful Houses, and is hard up, homeless, and in desperate need of a new direction in life.
Everything changes when he buys a coffeehouse near the Britannic Imperium Museum in Bloomsbury, the haunt of Aegyptologists. For the first time in years, Rafe is free to be himself. In a city powered by luminiferous aether and phlogiston, and where powerful men use House assassins to target their rivals, Rafe must navigate dangerous politics, deal with a jealous and possessive ex-lover, learn to make the best coffee in Londinium, and fend off murder and kidnap attempts before he can find happiness with the man he loves.

Reviewed by: Giles West
My Rating: 3 stars out of 5 Our hero, Captain Rafe Lancaster, is a former Aero Corps fighter pilot who’s had to leave his military position, and is trying to navigate his way around dangerous Londinium as a civilian low on funds.  It’s vital for him to be able to differentiate his allies from his enemies… and it’s not always easy in the vast city he calls home.  Author Anna Butler creates a fascinating backdrop, filled with rival houses vying for political power in a well-crafted steampunk universe.

When it comes to world-building, details can sometimes overpower the story.  In The Gilded Scarab, those things were handled just right.  The possibilities for characters and stories in this scape are endless.  Rafe Lancaster’s coffee house hangout, which figures heavily in the novel, is almost a character unto itself.  Characterization in general seems to be a strong point of the book’s author.  Each character has their own fully thought out story and they add much to the narrative.  In fact, that is where the story truly excels.  While settling into his new surroundings Rafe meets characters which the reader wants to learn more about, such as: the mysterious Edward and the amorous Daniel.  There is action, mystery, and suspense as well as romance.

Now for the good points about the book. The world-building as aforementioned, was very good. It’s intriguing enough to make this reviewer hope to see more of it in the future. The characters are interesting and you do care what happens to them.  I loved the attention given to supporting cast such as Cousin Agnes, Mr. Pearce, and Hawkins. And, even though she is a very minor character, Mrs. Somers. The deft touch with which the character was written was nothing short of brilliant. The action scenes were well written and held my interest. Even though I could predict where the story was heading and how it would end, the way it got there surprised me. Some things I didn’t see coming, which is good. And the romance at the heart of the book was one worth rooting for and it satisfied to a large extent.

There are areas where the book needs help. Most problematic is the beginning of the book. While I enjoyed the backstory a great deal, it was extremely difficult to lose myself in the story until around chapter sixteen.  Pacing seemed to be a problem. Something didn’t quite flow right. This should be an easy lazy Saturday afternoon read. It’s fun and entertaining, but unfortunately there are too many instances where I found myself jarred roughly out of the story when I wanted very much to immerse myself in it.

The book is very rough. I don’t mean this in an insulting way whatsoever, but in a technical one.  I’m writing this as someone who enjoyed the story in the end, but needs to be truthful.  It needed a knife slice across it to get rid of all the problems rising to the surface which prevented the story from being one-hundred-percent captivating.  The repetitious use of words in not only paragraphs, but also individual sentences, was unacceptable and will greatly reduce my rating.

The author was trying, at times, to highlight certain words by repeating them in a sentence. Using italics to bring focus on those particular words would probably work better. Or trying to find another word altogether. A very small example of this is in chapter five when the author describes Cousin Agnes: “Cousin Agnes was a deep-voiced, deep-bosomed woman.” Using the word “deep” twice doesn’t seem like a big deal on its own. And if there were just one or even two instances of this it would be forgivable, but the book is filled with examples which use the same word in a sentence more than a couple times. Anything that takes the reader out of the book is bad and that definitely stood out because of the constant overuse.

Here is another example: “White’s was the stuffiest club in the stuffiest part of the metropolis, and frequented by the stuffiest sort of old fogey.”  This book deserves better than that.  It’s things like repeating the word “stuffy” three times in one sentence which occur frequently in this novel.  This kept it from being a great story, despite the other elements of greatness being present in varying degrees.

There was something else which didn’t work well in my opinion.  While I fully bought the romance and love story, the sex wasn’t as believable.  Sex in a story can reveal something about the characters involved, or at the least titillate readers.  I found myself almost bored by it here. In many ways the story would’ve benefitted more from fade to black scenes.  Strangely enough, the action scenes were better written.  Those scenes were great, and funnily enough the emotional connections between the characters at these times was so real it served to heighten the suspense and sense of danger there, whereas the sex scenes just fizzled out.

I’m trying to be very careful with this review in that I don’t want to discourage this writer.  I would love to see her do a sequel to The Gilded Scarab or better yet turn it into a series.  There is a bigger problem, which all the smaller problems are a subset of and that is the problem of excess.  Excessive repetition of words fits into this, as well as a slightly repetitious feel to the sex scenes.  Even with some of the things the characters say or do, they go that one step too far sometimes.  Rafe comments fondly on someone’s smile and that does bring the reader’s focus to an important feature of one character as well as letting us know what Rafe feels for that person. Unfortunately, he says it one time too many in his inner dialogue in a short time frame.  It served to remove me from the scene, which was beautiful, touching, and romantic.  Rafe also waxed on too long poetically for who he was and it broke character.

There is something to be said for wanting to continue a book that was initially so hard to immerse myself in.  Instinctly I knew it would be worth it.  An earnest desire to see what happened to Rafe kept me going.  And it’s probably both a good and bad thing that at the end of the book I felt our couple needed more time than they got.  Readers would’ve enjoyed seeing more interaction between them and certain other characters, and I’m hoping we’ll see that in a sequel.

I would like to humbly make some suggestions to the author.  First I truly, truly, truly (yes  I did that on purpose as homage) believe that she could benefit from having a few more beta readers.  She needs someone to catch the repetitive use of words which really hamper the novel (all authors need this type of help because they are too close to the material to see it sometimes). The book probably should have been edited before it was sent to the publisher.  If it was, then it needed more.  It is very rough and the publisher’s edit didn’t catch everything.

As a reader, I think there is more to this story and I would love to see the author make this a series. The characters are firmly established in a compelling world and they’re worth seeing more of.

I would love to beta read (free of course) any sequel she might (hopefully) have planned to The Gilded Scarab.  I’m a big fan of ole’ Rafe.

I’m going to rate this book on several different fronts then give it an overall rating on a five star point system.  It seems the only fair way to do it because of the unevenness of the work.

Development - 5 stars ***** I liked both the characters and the way in which the story developed.

Pull - 3 stars ***.  This was difficult to rate.  The book was hard to get into at first, but something—probably the characters “pulled” me forward.

Originality - 3 stars *** It was predictable, but look at this alongside the 4 stars for story.  It was handled in a way that was interesting and-though this may sound contradictory, original.

Writing style - 2 stars ** This is the book’s biggest weakness, especially in regard to overusing words. Sometimes the words seemed just a tad flowery.  A lot of it does fit the time period, but it goes back to what I said about excess and going just a bit too far at times.

'It' Factor - 5 stars *****.  I think the book does have that special something.  And I’m giving it a high rating because like a fine dessert leaves a good aftertaste or nice feeling, this book does also.

I recommend this book — and personally enjoyed it, but do have to say that it is a rough read, especially in the beginning. Be pre-warned of that.  But, I think the characters and other elements will prove more than satisfying in the end. Although, with just a little polish it could’ve been a great book with five stars. It is solely because of the roughness of the writing and in great part because of word overuse (it’s unforgivable in a book) that I give it a final rating of three stars.

P.S. I was very sincere in my offer to beta read for the author.  Should she desire it, just contact this site.

Posted by multitaskingmomma at 6:28 AM