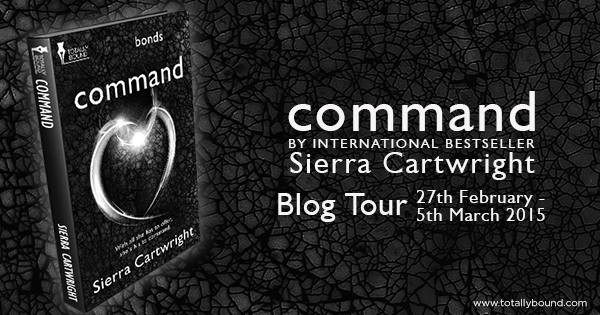 INTERNATIONAL BEST SELLING AUTHOR Sierra Cartwright was born in Manchester, England and raised in Colorado. Moving to the United States was nothing like her young imagination had concocted. She expected to see cowboys everywhere, and a covered wagon or two would have been really nice!
Now she writes novels as untamed as the Rockies, while spending a fair amount of time in Texas…where, it turns out, the Texas Rangers law officers don't ride horses to roundup the bad guys, or have six-shooters strapped to their sexy thighs as she expected. And she's yet to see a poster that says Wanted: Dead or Alive. (Can you tell she has a vivid imagination?)
Sierra wrote her first book at age nine, a fanfic episode of Star Trek when she was fifteen, and she completed her first romance novel at nineteen. She actually kissed William Shatner (Captain Kirk) on the cheek once, and she says that's her biggest claim to fame. Her adventure through the turmoil of trust has taught her that love is the greatest gift. Like her image of the Old West, her writing is untamed, and nothing is off-limits.
She invites you to take a walk on the wild side…but only if you dare.
Check out Sierra's new Bonds website.You can find Sierra on Facebook, follow her on twitter and check out her page on Tumblr.

Hello, Multitasking Momma and Ramona, who’s also a Multitasking Momma! Just yesterday, I read a great article about why women need more sleep than men. Essentially, our brains are more active because we multitask! But you two seem particularly awesome at it! So if you need a nap, that’s why.
Thanks for having me on your awesome and fun blog. I’m happy to be here! Sierra Command:
This is book three in the Bonds series, see the full series listing here

With all she has to offer, she’s his to command…
Aria DeWitt is a runaway bride. Only months away from her wedding, she panicked, returning her engagement ring and donating her gorgeous gown to charity.
She’s less than pleased when she’s reassigned to a new work project and sent to work with Grant Kingston in the middle of nowhere. She knows of his reputation as a recluse and genius, but she isn’t prepared for how handsome, powerful and deliciously Dominant he is or how he ignites something inside her that no man ever has.
Grant isn’t happy when his cherished solitude and creativity are shattered by Aria’s unwanted and unwelcome arrival. That is until he glimpses her carefully concealed vulnerability. Aria’s confidence and responsiveness intrigue him, ensnaring him in a way he’d never believed possible, chipping away the ice that shrouds his heart.
As he interacts with her, he realizes why she ran from marriage. She’s never met someone strong and complex enough to hold her interest. And suddenly, he’s determined to be that man.
Reader Advisory: This book contains scenes of anal play.

Oh my. This was... hehheheee okay. I love that this is the story of Grant Kingston that guy who just ticked me off big time in the first two books? Well, he's not so bad after all! In fact, he's just plain, uber uber sexy. Take that Christian! (oooops?! no apologies!)

Anyway, we have two people whose life revolves around work and basically when life intrudes on their work they actually resent it. So Aria does away with a wedding and a beau and focuses on more work. She really hates to be assigned something else when she's just too busy and did not want to have to deal with something new. But then she sees Grant and, well, there the story begins.

Grant is a nerd, but he does not fit into that generalized category at all. He is so out of the box as a leading man, it's hard to get past his great looks and dominant personality. His nerdiness makes such a huge difference on how I first assumed him to be that it makes it a bit of a shock to the system on how Dom he is. In the usual formula, we have the nerd as the sub but Grant is no sub and Aria is.

But is she really?

The sparks fell off the pages, it's sizzling HOT! . A truly sexy read!

That’s My Girl!
By Sierra Cartwright

Frequently, I talk about my heroes, all yummy, strong, alphas, filled with integrity and gritty determination. They know what they want and they go for it, especially where the heroine is concerned.

The heroine in my books is always worth fighting for. She’s complex, often flawed, always strong and independent. She works hard, just like we do. She’s got a million responsibilities and juggles a dozen different tasks.

In fact, she’s probably a lot like you and your friends. She’s someone you’d invite to your happy hour or ladies’ night out. She’s fun, maybe a bit bawdy, capable of taking care of herself, and she definitely doesn’t need a man to complete her. She may have made a mistake or two in the past, and it’s helped her become the person she is today. If she’s looking for a relationship, she knows the right one is worth waiting for.

And that’s why the hero deserves her. He respects strong women. He loves that she won’t put up with nonsense from anyone—even him. She’ll frustrate and challenge him like no other woman ever has. On the other hand, no one has ever turned him on as much as she does. No matter what she looks like, what her nationality or job is, no other woman on the planet is as beautiful to him. And he lets her know it.

That’s certainly the case with Grant Kingston. He’s a recluse, a genius, a dominant man content with his life, until an unwanted houseguest shows up on his doorstep. Aria DeWitt knocks his world out of orbit. She’s everything he shouldn’t want. Hot, sexy, sassy, hardworking, determined to pry him out of his shell. She makes all his dominant urges flare.

While she’s thrilled by his sensual expectations, she has demands of her own. She wants him to reengage in life. She can’t, won’t, stay at his mountain retreat forever. If he hopes to earn her love, Grant will have to take a few risks.

A good woman will do that to a man. It’s just one of our talents!

Obviously Grant needed no further encouragement. What had been gentle now ratcheted into something carnal, weakening her knees and taking her resistance with it.
He tasted of the wine, and more, of possession. Suddenly, she knew that whatever he was offering, she wanted it.
Grant pressed one hand to the small of her back for support then he eased her backward a little, making it clear he was in charge.
Grant turned a kiss into an art form. He teased, tantalized, took, plundered.
It went on forever, and ended too soon, leaving her breathless. Her lips felt swollen, and arousal careened through her, demanding satiation.
Her knees were a little weak, and he helped her to stand back up.
“That was—”
“Only the beginning.” He pulled up the hem of her sweater, baring her midriff.
Part of her thought they were moving too fast. The naughtier side of her insisted he get on with it.
She raised her hands over her head so he could tug the garment all the way off, and he tossed it onto the couch.
“Keep your hands where they are,” he instructed, voice soft, reassuring, demanding.
Everything about his words and actions seemed carefully calculated to bring her to greater levels of arousal.
“You’re gorgeous.”
He traced his thumbs along the lacy tops of her bra cups, then rested a fingertip on the dainty red bow between her breasts. “Turn around for me.”
Slowly, she did, stopping with her back to him, anticipating that he’d unhook her bra.
“Keep going,” he encouraged.
Wordlessly, she did. Aria finished her pivot and tipped back her head. Odd, she was still mostly dressed, and yet she felt as if he’d seen more of her than any other man ever had.
“I’d like you to show me your breasts.”
At this point in a seduction, she was accustomed to a prospective lover helping her along. But he remained in place, and in fact, crossed his arms over his chest. Her mouth dried at his commanding stance.
She unfastened the hooks and shrugged so that the straps fell from her shoulders. Very much aware of the heat that blazed in his eyes, she pulled off the bra and allowed it to dangle from her index finger.
He took the lingerie from her and tossed it on top of her sweater.
Again, he defied expectation. She expected him to touch, to squeeze, to press her breasts together, but he didn’t.
Standing there was a little disconcerting. But she was already learning he did things at his pace.
“Cup them, lift them, draw them together,” he instructed.
“Is this a striptease?”
“Yeah. You strip. I tease.”
“I don’t think I like your rules.”
His eyes seemed to smolder. She’d never been looked at with this sort of appreciation.
“Show me,” he reminded her.
Feeling a bit self-conscious, she did as he’d instructed, putting her hands beneath her breasts then lifting them, pressing them together.
“May I touch?” he asked.
“I thought you’d never ask.”
He traced each nipple, so lightly that she wondered if she’d only imagined the touch. Her body seemed to hum with energy. Never had a man’s touch aroused her so much.
He circled the areolae, then abraded her nipples with his thumbnails. Each thing he did heightened her arousal.
“Do you like to have them pinched?”
“I’m a little sensitive.”
“Mind if I gauge?”
She met his gaze. “Go ahead.”
He rolled her right nipple between his thumb and forefinger, and she leaned toward him. “You like that.” It wasn’t a question.
He repeated the action on her left nipple.
This time, she moaned.
“More?”
“I think you might have spent the day figuring out ways to torture me,” she confessed.
“You’re right.” He placed a gentle kiss on top of her head. “I’ve been imagining this.”

Enter Totally Bound’s competition for the chance to win a copy of Command and three books from Sierra’s backlist!