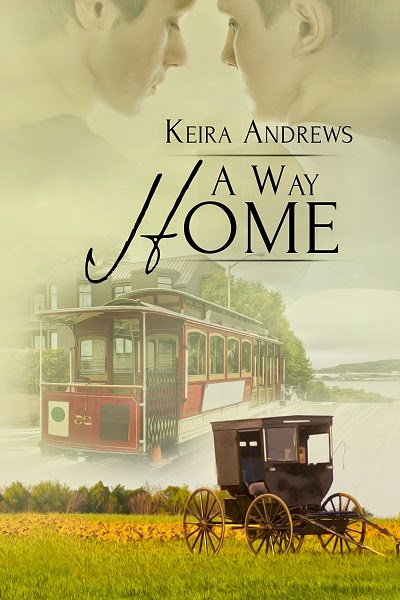 
Will returning to their Amish roots renew their faith in each other?
Isaac and David never thought they'd go back to the Amish world. But when Isaac’s younger brother is stricken with cancer, they don’t hesitate to return. Their relationship is on the rocks after insecurity and fear drove a wedge between them in San Francisco, and David is determined to make things right. Yet if they thought navigating “English” life was confusing, being back in Zebulon is even more complicated.
Their families are desperate to bring them back into the fold, and pressure from the community builds. Isaac and David yearn for a future together, but each day it becomes harder to hide the truth about who they really are. They're caught between two worlds, and if they’re not careful it could tear them further apart.
Can Isaac and David make their way back to each other—and find a place to call home?

A Way Home will also be available at:

All Romance, Barnes and Noble, iTunes, Kobo and Smashwords

Save 40% on this story of forbidden Amish love

To celebrate the release on April 8 of A Way Home, the final chapter in the gay Amish romance trilogy, Keira Andrews is offering 40% off the first book. You can buy A Forbidden Rumspringa now for only $2.99!

I had been anticipating this last book of the Gay Amish Romance series for quite some time, not because I needed closure, but I wanted to find out how Isaac and David finally get to realize who they are, what they are, and if they are ever going to reach that point where they no longer had to look back home and pretend not to. Well, A Way Home not only gave the answers to all of my questions, it left me without any doubt that:

When last we had heard from both these young men, they had reached that point where their trust for each other were getting frayed around the edges. No question on their love for each other, but the events that traumatized them in the second book, A Clean Break, affected both men in many different ways but also similarly. In that story, it was the lack of communication that did them in. Well, in real life the lack of communication can be the root of all separations and unfortunately, there was a break in Isaac and David's relationship. This is not a spoiler if you've read that book and the book prior to it, when the two first met and fell in love.

Now, this book opens when Isaac joins his brother, Aaron, to their younger brother's bedside. These are now desperate times for Isaac knows they would not be welcomed with open arms. Aaron had been excommunicated and according to the Ordnung, Aaron does not exist and should not even be acknowledged. In the meanwhile, Isaac's conscience is eating at him and offers to help out in their farm. Although his help is cordially accepted, his parents sets rules that include him not acting English.

David rushes to his lover's side and arrives with the weight of the world on his shoulders. He had been going through some tough times and he is insecure in his status as Isaac's boyfriend. When he arrives in Zebulon, he discovers that the family he had left behind had moved on, somewhat, but when asked to come home under their rules, he steadfastly refused.

The clash of personalities, beliefs, faith, opinions and ideals going on in this story can be mind boggling. I found myself torn between whose side to take for each of them, the families versus Isaac and David, they each were in the right. Unfortunately, they clashed and it was just a battle of wills that set the delineating lines of choice. The battle for who crosses the lines, that was what spurred this story on, especially with regards to the medical support.

Although there is a lot going on in this story, the plot stayed true on its course. The events flowed smoothly, the characters, especially both sets of parents, they truly evolved. Hot! scenes between Isaac and David of course are present and accounted for, but they did not distract too much. It just made me squirm in a delightful way........ okay! no spoilers!

Overall, this is the end, this is the final act, and the resolution reached, it was just perfect. Everything fell into place and everyone, from Isaac to David to the side characters, even those we had forgotten but knew were there, they all grew and matured and maybe, hopefully, became accepting. More so in others.

After writing for years yet never really finding the right inspiration, Keira discovered her voice in gay romance, which has become a passion. She writes contemporary, historical, paranormal and fantasy fiction, and—although she loves delicious angst along the way—Keira firmly believes in happy endings. For as Oscar Wilde once said, “The good ended happily, and the bad unhappily. That is what fiction means.”

Note: Copy for review provided by author and she's awesome!