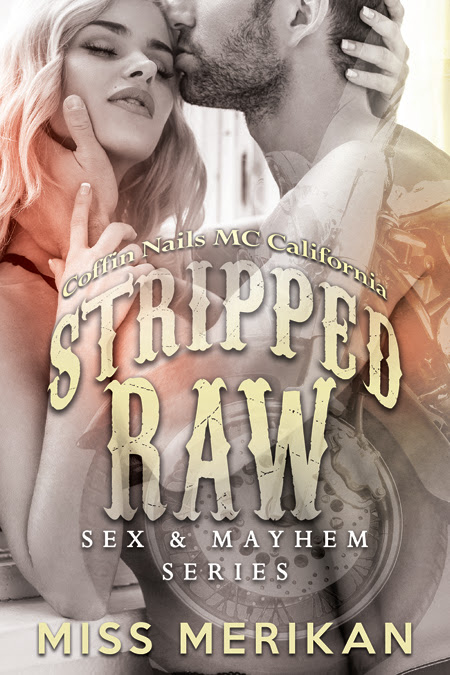 --- What’s left when you strip away the lies? ---
Sam. Loyal to the Coffin Nails MC. Lives by his own rules.Weakness: Damsels in distress.Jolie. In a deeply ambiguous relationship with the Coffin Nails MC. Lives from paycheck to paycheck.Weakness: Bad boys.
As a patched member of the Coffin Nails MC, Sam is finally living the life he was destined for. A life of Harleys, guns, drugs, and eating pussy. A life of brotherhood above all.When he goes to pick up some pot brownies for the club president’s old lady, he meets a girl so sweet, his inner wolf wants to eat her there and then. What is supposed to be a typical fling, gets damn more complicated when the Coffin Nails decide to involve the pretty blonde baker in their drugs operation.
Jolie has a knack for baking delicious cakes, but when it comes to her taste in men, she is a self-professed failure. After a disastrous relationship, she is still picking up the pieces and working three jobs to manage the financial carnage her ex left her with. The last thing she needs is a hot piece of tattooed hunk stomping into her life. Sam calls her ‘Candy’, but with a talent for being in the wrong place at the wrong time, Jolie should be called ‘Trouble’.
To be with Jolie, Sam would have to disclose a secret he kept locked away for years. A secret so raw, that it might destroy his place in the brotherhood he’s fought so hard to be a part of.

Review by: multitaskinmomma
My Rating: 5 of 5 Stars

Who would have thunk it? I am reading MF but then again, this book is not really what it seems.

This is the story of Sam, patched member of the Coffin Nails MC, who has gone through the gamut of a tough life. The secret he keeps, it is always the thing that spurs him on. It makes him work harder, be tougher, and be just a trusted brother. When he meets Jolie, something just clicked, although, he did think it was merely getting attracted to a well-built woman who not only looks good, but bakes the best sweets.

Jolie has had a tough time, from getting expelled from school, to running off with a ditsy boyfriend who just up and disappears, leaving her with a tramp stamp and a whole lot of debt to the wrong kind of people. The Italians. When she gets the job order for a hash-brownie, she grabs at it. She needs the money and keeping three jobs at once is not paying enough. Then she meets Sam and she just drowns.

Jolie and Sam. Sam and Candy (Jolie). This is a couple I never thought to like. I loved Sam from the first badass speech that left his mouth but Candy? It took me some time. Maybe because I keep going back to thinking her a man (I am a bonafide MM fan and reader so please, bear with me) then when she opens her mouth and gets into trouble, I remember she is female and I just want to strangle her. How Sam puts up with her, I throw my hands in the air and just give up. That made me love Sam even more.

As a character, I cannot stand Jolie but then again, it is because she is a woman and I am a woman and all that jazz. But Sam? Oh my. I really fell in love with this character. He is just so darned off the bat bad and amoral and all.

I have been a fan of the Merikans for some time now and they just dropped me this book to look at. I hesitated, it is MF after all. But then, they dropped another bomb: there is a secret and they hinted it to me and I got hooked. Needless to say, I love this story and can't wait for what comes next. Miss Merikan is the pen name for Kat and Agnes Merikan, a team of writers, who are taken for sisters with surprising regularity. Kat’s the mean sergeant and survival specialist of the duo, never hesitating to kick Agnes’s ass when she’s slacking off. Her memory works like an easy-access catalogue, which allows her to keep up with both book details and social media. Also works as the emergency GPS. Agnes is the Merikan nitpicker, usually found busy with formatting and research. Her attention tends to be scattered, and despite pushing thirty, she needs to apply makeup to buy alcohol. Self-proclaimed queen of the roads.
They love the weird and wonderful, stepping out of the box, and bending stereotypes both in life and books. When you pick up a Merikan book, there’s one thing you can be sure of – it will be full of surprises.

Posted by multitaskingmomma at 6:43 AM