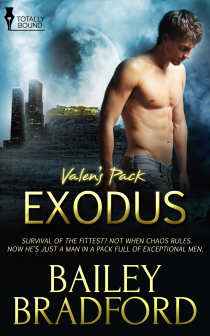 Survival of the fittest? Not when chaos rules. Rivvie does his best as beta, but he’s lonely and secretly nursing a broken heart. He fell for Matthew instantly, to no avail. Matt was too busy screwing every female in sight. He didn’t give one whit about Rivvie. Well, he told Rivvie he wasn’t interested. Rivvie just didn’t think he meant it. Matt’s whole life has changed. He was the good son, the village hero, and the village stud. Now he’s just a man in a pack full of exceptional men. He’s a human—smaller, weaker and slower than the shifter males he lives with. External chaos has nothing on the internal crap he deals with every day. When Rivvie and Matt are paired together for a task, sparks fly. It’s just possible that there’s more to sex—and more to Rivvie—than Matt ever suspected. While Rivvie is dancing around an attraction to a certain human male, his brother, Valen is trying to lead his pack and take care of his own mate, Aaron. Just when he thinks he’s got everything under control, that very control is yanked from him by a powerful series of natural disasters, and soon Valen’s leading his pack on an exodus he’d never expected. Reader Advisory: This book contains scenes of BDSM, spanking, biting and BDSM-related genital torture.

I have to admit, I really, really did not expect this to go the way it did. After reading the first book, Run With the Moon (Valen's Pack #1), I had lower expectations. There, I said it.

In that first book, the world building, the violence, the series of misfortunes, mating, romance, erotica, it felt a little too formulaic. That is only to be expected, I guess, but with this second installment, all my misgivings have been erased. There were a few plot holes in the first book and although it was romantic somewhat, there was a sense of disconnection. In Exodus, the writer successfully covered up the holes, and for the first time, I fell in love with Valen and Aaron for it is only in this book is their relationship solidified. That is strange for I had expected it to happen in their story.

With this one, we have Valen's brother and Beta, Rivvie who falls for Matt, the older brother of Aaron. Their story began in that first book and we caught a glimpse of a tempestuous relationship which quickly went south because of their fears, expectations and lack of information. One point in contention was Matt's playboy ways and when we first read him, he was like a bee, going from one woman to the next. His conflicting emotions and thoughts only come out when we get his side of the story. As for Rivvie, well, he has his own insecurities as well and when reading him, we discover how deep those go, especially when he watched Matt with others.

In the midst of the romances and trials of the heart, we have a world going haywire. The new pack of humans and shape shifters are a bit lost, especially when Lanaka goes on a walkabout and does not return. Then the natural disasters happen which are mysterious in their own way for nothing could be natural about those. Add in the mysterious malady that seems to be affecting the human population, both Valen and Rivvie are up to their necks in trying to get their pack to safety and saving them from the marauding crazy humans. To make matters worse, another mystery is happening and Valen and Rivvie discover, this one may just be their saving grace. Question is, will the humans be acceptable to the change it may bring about.

This second installment is well thought out compared to the first. It is only in this book do I recommend to follow this particular series for there is a difference going on and it is for the better. Bailey Bradford really surprised me with the twist in this series arc and I am anticipating the release of the third book where more answers get revealed and more partnerships in the making.

Note: Review based on copy provided by Totally Bound.

A few things about me...
I am a married mom of four who spends most of the day writing, either on stories or at the blog. I love to write as much as I love to read. I am generally quiet and laid back, choosing to let things slide off me rather than stick and irritate me.
And it's really hard trying to think of descriptives for myself, so I'll just let y'all e-mail me or comment at the blog if there's something specific you'd like to know, and spare you from reading a boring bio :D

Posted by multitaskingmomma at 12:42 AM