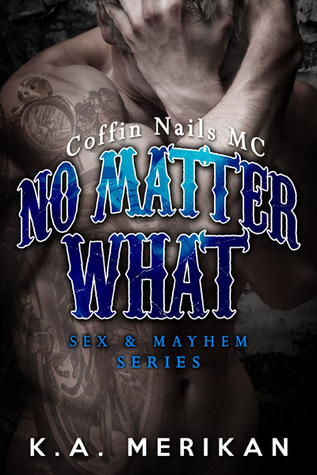 -- A gentle heart has no place in an outlaw’s chest ---
Ghost. Not a member of the Coffin Nails MC. Not a doctor anymore. Not gay.Luca. Bent, not broken. Will not let go of Ghost. No matter what.
Ghost finds out the hard way that people you meet online aren’t always who they seem to be. When he met ‘Zara’ five years ago, they became inseparable. She’s been with him through the rough and the smooth. He’s been there for her when her abusive boyfriend had her in tears.
She is The One, and despite all his friends considering him crazy, Ghost is about to propose.
But ‘Zara’ turns out to be Luca, and Luca is most definitely a guy. Yet Luca is the same person with big dark eyes, so desperate to be saved that Ghost can’t help but fall head first.
Luca’s so-called boyfriend is not just abusive. He is a Sicilian drug lord, a man dangerous and ruthless. If Ghost is to ever save the person who wreaked havoc on his heart, he has to make a deal with the Coffin Nails MC. But being a member is a destiny he’s always tried to avoid. And when a life of violence becomes too much to bear, he might be the one needing Luca to catch him when he falls.

This is a pretty dark book. Filled with the usual angst and drama of an MC novel, the authors took this a step further than expected and it is truly unexpected.

Ghost is that son of Don, former doctor, the one to save Lucky from certain death and is in love with Zara. After five years of online chatting and getting very close, Ghost knows that not only is Zara his best friend, but his support and his one true love. When Zara arrives in New York, he knows he needs to save his girl from the clutches of the evil boyfriend and make her his own.

Only, Zara turned out to be Luca. Sexy, true. Beautiful, true. His best friend, true again. But he is male and Ghost is straight as straight can be.

Ghost makes a rash decision, one that will rescue his Zara/Luca from the boyfriend who turns out to be one bad assed Mafioso drug gangster who is as evil, cruel and manipulative as can be. The repercussions are some things he is not ready to handle. Anytime. Anyplace. Anyhow. It gets bad. Really, really bad.

This is a truly dark tale of love and vengeance. For those of the light-hearted, thinking this is another Sex & Mayhem story, be cautioned. Be warned. There are elements here that are not only those warned at in the huge WARNING sign on the blurb. Take those same elements and extend it a bit further so you know what to expect, but again, be aware, expect the unexpected.

As a read, this is really dark, but it tells a tale that should be told and remembered. Luca and Ghost deserve their story and they need their chance to tell it. If you are brave, go, read and truly fall in love as I did.

Note: Prepare a whole lot of tissues. Make it a box.

K.A. Merikan is a joint project of Kat and Agnes Merikan, who jokingly claim to share one mind. They finish each other's sentences and simultaneously come up with the same ideas. Kat and Agnes enjoy writing various kinds of stories, from light-hearted romance to thrillers. They love creating characters that are not easy to classify as good or evil, and firmly believe that even some villains deserve their happy endings. It is easiest to find them in galleries, good restaurants and historical sites, always with a computer or notebook, because for Kat and Agnes, every day is writing day. Future plans include lots of travel and a villa on the coast of Italy or a flat in Paris where they could retire after yet another crazy venture, only to write more hot homoerotic stories.
Kat and Agnes started as popular authors of online serials written in their native language, but are now focused on reaching a wider readership by writing in English. As K.A. Merikan, they have published a number of books, which cross genres while always staying homoerotic.
We have always valued the feedback we receive from our readers, so if you have any suggestions, comments or questions, do not hesitate to contact us.