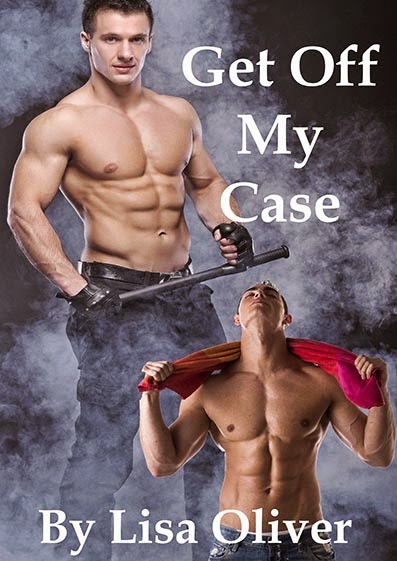 Author Name: Lisa Oliver
Book Name: Get Off My Case

The first 20,000 words of this story were published as a free read for the Goodreads MMRomance Group Love's Landscapes Project. 49,000 words have been added to make this into the book my characters wanted it to be.

Shane West was used to being the only wolf shifter at the Stockton Police Department. His enhanced senses helped him do his job efficiently and he prided himself on keeping control of his animal instincts. Gay from the first day he'd shifted, he also expected to live his long life alone, and provided it meant that he didn't have to come into contact with any of his ex-pack, he told himself he was happy. And he was. Until Dimitri Polst was assigned as his new partner.

Confirmed ladies man, Dimitri Polst knew Shane from before he'd ever shifted into his wolf form.  Two years older and from the same pack, Dimitri had made it his teenage mission to bring as much pain and humiliation to pretty-boy Shane as possible. But years later, he searched for that pretty boy, now all grown up, with a completely different mission in mind.

Being fated mates was hard enough, but when one man is straight and the other one has no reason to trust, then sparks are bound to fly.  Add in a serial killer who is making inroads into the gay population and a possible shifter involvement, and Shane and Dimitri have a lot of thing to overcome before they get their HEA.

Note: I never read the short version of this book, the one released through Goodreads MMRomance Group Love's Landscapes Project. The review for this book is based solely on this edition.

There is one individual in this world I cannot tolerate and the name is Hypocrite. This is Dimitri for me. An unlikeable hypocrite who allowed his fears to get the better of him. It was excusable, not so much but a bit, when he did so when younger. To allow his hypocrisy to continue and almost destroy not only one, but two lives, that was quite a cowardly behavior. So yes, the second individual's name is coward, and its name is Dimitri. Not a likable fellow at all, especially when he is the main squeeze in this shifter romance story.

Shane West left his pack as soon as he could and enver looked back, never regreted it for a second. His life in the pack as a gay young man still unshifted was intolerable. The bully in his school never let up on him, even when he took a sniff and inexplicably turned his back and those of his gang from more torment. Although he wanted to find his mate and maybe get a real chance of a family life and happiness, he did not miss what he never had so went on his life as a police officer in Stockton. Then his partner had to go on leave and he gets stuck with the nightmare from the past. The bully.

Dimitri Polst knew from the time he took a sniff of Shane when they were younger they were mates. Did he do anything about it? No. Did he protect his mater? No. Well, he kinda does. Once. But it does not count. Did he make amends? No. Did he, at least, go out of his way to make Shane more comfortable in his presence? No. The next questions I have in mind are numerous but  all the answers point to a resounding: NO. So what business does he have staking a claim on Shane, especially in the guise of a temporary partner?

Not a good way to start a relationship but it does set the mood and I roll my eyes. I did, until I read and got fascinated with the simple fact this was so lightly written, it was fast paced and easy on the brain. The thing is, Dimitri became someone else through a series of mistakes and denials. Shane was never patient and actually reached frustration points. What are they to do? They are mates. This made it difficult. To compound their personal troubles, they have a case to solve and they never could catch the killer.

The story does reach the inevitable HEA point and that made me smile. Yes, originally this read was 49k less than this one but where the first short supposedly ended with a cliff hanger, this one does too, but in a much better way. Why? This is the precursor of a series and surprisingly, errors in editing and all? I really liked this read and want to follow up on the series.

Recommended for those who wish to feel the guilty pleasures of a romantic read and close their eyes to some editing errors which are negligible for me but not for others. Other than that? Go and read. I really enjoyed myself.

By the time Dimitri had got to the back door of the club he knew his wolf was close to the surface.  He could feel his eyes changing and the hair on his arms start to tingle.  It was only through sheer force of will that he stopped the change completely.  Must not shift in front of humans, he tried to remind himself as he searched the dark alley, sniffing for his mate’s unique scent.  There, deep in the shadows.  The young blond was wrapped around Shane’s waist and neck like he belonged there. 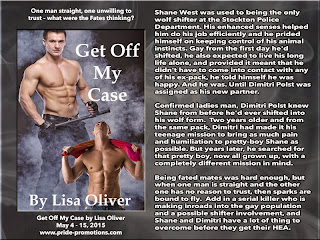 Growling loudly Dimitri strode over to where the two men were hidden, his hands changing into claws as he itched to grab the little interloper and tear his body to inch sized bloody pieces.  He couldn’t and wouldn’t hurt his mate, but he could and definitely would shred the little blond until he wasn’t a threat to Dimitri’s mating again.
“Dimitri, stop damn it!” Shane called out in a low voice as he carefully wound the young blond’s arms from his neck.  “This is not what you think.”
Dimitri stopped himself, just, and watched as Shane spoke in a low voice in CJ’s ear and then gave him some money.  CJ looked up at Dimitri and scowled at him and then took off back into the club.  Shane flung out his arm and grabbed Dimitri by his belt loops and smashed him into the same wall he had been leaning on while he was entangled in his blond.  But Shane’s eyes weren’t full of passion, Dimitri noticed.  His mate was pissed off with him, big time.
“You just cost me some valuable information, fuck wit.  Now what the hell did you think you were doing?”  Shane snarled at him in a low voice.
“Is that how you get all of your information, detective,” Dimitri snarled right back. “By giving sexual favors to your tipsters?”  Fuck, with Shane so close Dimitri could barely breathe.  His cock was so hard in his jeans that it hurt and he couldn’t break his stare with his mate.  Man, this guy was awesome when he was angry.
Shane tipped his head to the side and then took in a deep breath, obviously smelling Dimitri’s arousal.  For a moment he looked confused, but that expression was gone in an instant and Shane’s angry gaze was back again.  He leaned in flush against Dimitri’s body and growled softly in his ear, “CJ is an informant of mine.  He’s been beaten before for talking to the wrong people and I don’t want to see my friend in hospital.  We act like a hookup so he will be safe, asshole.  So don’t go judging what you don’t understand.”
“But you’ve fucked him, right?”  Dimitri regretted the words the instant they came out of his mouth as he watched a flash of pure murderous intent race across his mate’s hard face.
“Not that it’s any of your business, fuckwit, but I have never done anything sexually with CJ or any of my informants.  Unlike you, I have standards.”  Dimitri knew Shane was referring to the fact that when Dimitri was still in school he used to fuck anything in a skirt regardless of who it was.  With his jock reputation and good looks he never lacked for girls willing to lift those skirts and give him what he wanted.
But right now Dimitri didn’t care that Shane was angry with him, or that he might have fucked up an investigation.  Shane was leaning on him, chest to chest, but had kept his groin area away from Dimitri.  And Dimitri was so turned on he couldn’t think.  He needed friction on his cock and he needed it now.  He reached out and grabbed Shane by his hips and pulled the man’s groin into his.  Both men groaned as their dual erections nudged each other and Dimitri rocked into Shane looking for more.
“What the fuck do you think you are doing?” Shane snarled.  Dimitri could see Shane’s eyes were blown with lust and the man was panting softly.  Against his cock, Shane’s sizable erection nudged his and for the first time in his life Dimitri wanted to see another man’s cock.  But not just any cock - Shane’s.
“I haven’t got a clue,” Dimitri said honestly, his own deep voice raspy with lust, “But I know I like it.” 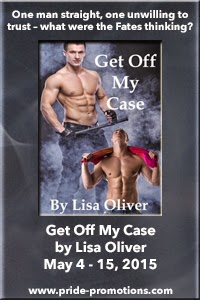 11-May
Vampires, Werewolves, and Fairies, Oh My
Inked Rainbow Reads

Rafflecopter Prize: Print copy of ‘Get Off My Case’, available to anyone worldwide

Lisa Oliver had been writing non-fiction books for years when visions of half dressed, buff men started invading her dreams.  Unable to resist the lure of her stories, Lisa decided to switch to fiction books, and now stories about her men clamor to get out from under her fingertips. When Lisa is not writing, she is usually reading with a cup of tea always at hand. Her grown children and grandchildren sometimes try and pry her away from the computer and have found that the best way to do it, is to promise her chocolate.  Lisa will do anything for chocolate.Lisa loves to hear from her readers and other writers.  You can friend her on Facebook here, or email her directly at yoursintuitively@gmail.com.