Find out how Jessie G. deals with MCs that make men go yikes! and women swoon... 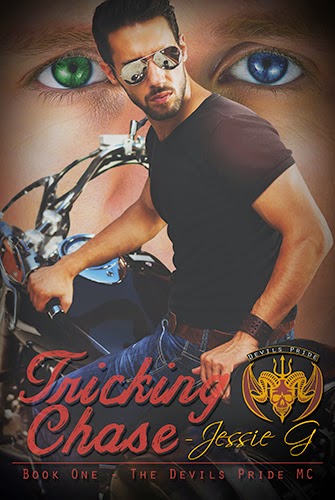 As Sergeant At Arms for Devils Pride MC, Tyler “Trick” Malone’s take no prisoners reputation make him one of the most feared and respected members of the club. Unbeknownst to the MC, Trick indulges his most dangerous secret, traveling out of state twice a year to trade his cut for the whip he expertly wields at a gay dungeon.
Trick’s well organized life takes a turn when he saves bar back, and terrified submissive, Chase Ward in a Georgia dungeon. With his protector and dungeon owner dead, Chase is no longer safe in the place he once called home. With the new dungeon owners circling like sharks, he desperately begs for sanctuary in the arms of his savior.
A year later the MC is still none the wiser that Trick’s houseboy is anything more than a grateful servant. Chase knows if the club finds out they will kill Trick, the man he’s come to rely on for everything from the food he eats to the pleasure he feels to the security he craves. Even when gratitude turns to love, Chase never expects reciprocation from his ruthless Master. After all, the only way for them both to survive is if Trick remains the heartless bastard the MC knows.
Trick is positive he has it under control and having Chase around has definitely made his life easier. There doesn’t seem to be any harm in letting Chase take a part-time job at Velvet Ropes, especially after meeting privately with the owners. That is until a bomb explodes at the club, leaving Chase fighting for his life and forcing Trick to face his long hidden feelings.
Even if Chase survives, that bomb has done more than rock the foundation of the popular leather club. It’s blown Trick and Chase’s well-guarded secret out of hiding, putting their lifestyle and their lives at risk. Now there is only one thing Trick needs to do before the club gets them and that’s to get revenge on the person who dared to hurt his precious boy.
Author's Note: This book is a spin-off of The Protector and, though I tried to provide enough details that it isn't necessary to have read that book, I cannot really call it a standalone. This book contains an established D/s relationship as a lifestyle, hot guys on motorcycles, an undercover DEA agent named Snake and a few visits from our favorite Sizzling Miami characters.

Before I go on to the review, let me just say, I inhaled this book in just two hours. And I was in bed, my pet and hubby snoring away, and I just inhaled this. Dreamed this too. So yeah, I am busted!

Trick has been lurking in the sidelines for a while now. Those who have read the other books by this awesome bloggermomma author should know him. He is bad ass, he is the SAT of the MC Devil's Pride and he is a dom. A master of strategy, of weapons and of someone hinted at. Now we have Tricking Chase and we get the name stamped in our minds and we can connect. Remember in The Protector (Sizzling Miami #3) where someone got royally hurt? Well, that was Trick's boy, Chase. (Note: Those of you who have not read this author, get a hold on her. You won't regret it. Promise.)

In this installment, we get the chance to go back to a little bit of history. How Chase got to be Trick's boy, how Trick tricked himself into having Chase, and how both Chase and Trick got to merge themselves in the world of the MC without getting caught. Why caught? Well, they were hiding in full view of everyone, but as Trick is Trick, well, no one wanted to see what was right in front of them.

In this installment, we get the chance to see the men of the Sizzling Miami series and find out just how they get to be such great friends and lend a helping hand to main MCs. We also get the chance to find out how it all ends with Trick's witchy sister who surprised everyone with her presence in the third book. In short, this book ties up all the loose ends and there are many twists to the surprises going on here.

Now, for the read itself? Well folks, hello! This is a Jessie G. book, need you ask? Go for it and if you missed the rest? Go for it!

First I want to thank multitaskingmommas Book Reviews for hosting the Tricking Chase book tour today. I think they’ve done all my book tours and their support of my work is truly appreciated. I asked for a prompt to get this post started and they come up with a dozy!

I have always wondered why MC stories are considered a sub-genre. What is it about these stories that make women readers swoon and men go yikes!?

In regards to why MC stories are considered a sub-genre, I think the answer is simple. Amazon. Way back in the era of book stores, you saw sections for Health, Self-Help, Religion, Children, Teens, Romance, Mystery, etc. Pretty generic, but we knew exactly what section to go to. When we got there, we perused the pretty covers, looking for something that called out to us. We’d grab that selection off the shelf, admire the cover some more, then flip it over to read the back blurb. At that point we knew two things: if the subject matter was to our liking and if we wanted to buy it. The back blurb told us if it was a sweet romance or something edgier, if it was a paranormal or a suspense…the list is endless. All under that umbrella category ROMANCE. If it wasn’t for you, it went back on the shelf and you continued your search. I could spend hours perusing those shelves and it felt like home.

Now we’re in the instant gratification age. Everything accessible by a few keystrokes, and the fewer the better. The extensive assortment of sub-genres is a blessing and a curse. From a buyer’s standpoint, I can instantly drill down to a subject that interests me. At the same time, it hides so many great books because it doesn’t fall under this newer, tighter, search algorithm. From a writer’s standpoint, I only get to choose two sub-genres for a book and a handful of keywords. I have to hope I chose wisely, otherwise my books are hidden from people who might be looking for something different, but don’t know what that something different is that they’re craving.

In regards to why women swoon and men cringe, it’s all about that bad boy your momma warned you about! He thumbs his nose at authority, wears a leather jacket, smokes—think Rebel Without a Cause or even Happy Days. Who could argue that Arthur Fonzarelli—The Fonz— was the whole reason we tuned in every week? While we’re being warned away from the bad boy persona, Hollywood is romanticizing him. What’s a good boy to do when all the girls (or boys) are batting their eyes at the bad boy? Now fast forward, you’ve grown up, found a partner and maybe had some kids. You’ve got a great guy who works hard, he treats you right, and he’s respectful. Oh the bliss. So what’s a good guy like that supposed to do when his loving partner fills the bookshelves (or eReader) with romance novels about bikers and pirates and Sheiks and billionaire playboys who swoop in to woo the girl (or guy) off their feet. It’s a cruel, cruel world for the good guys who stoically put up with our love affair of the bad boy.

I probably dated myself with some of the references, but you can insert any number of TV shows or movies that romanticize the bad boy and it still means the same. He’s mysterious, dangerous and that makes him drool worthy.

I want to thank multitaskingmommas Book Reviews again for hosting me! Good luck to all who enter the rafflecopter and please leave a comment below. I’ll be stopping by throughout the day to answer any questions you might have and see what you think of why we’re so infatuated with these bad boys. 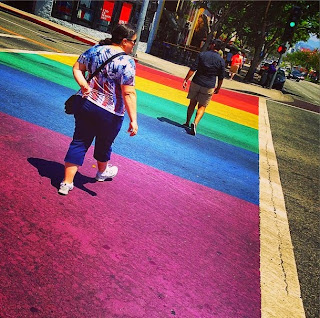 Like many readers, the dream of being a writer has been with me a long time. After three decades of trying, I'd begun to doubt. Thanks to social media, I followed my favorite authors hoping to glean some words of wisdom as I pounded out half-formed ideas with alarming regularity. Two repetitive themes emerged: To be a great writer you must read a lot and your butt must be in the chair every day like it's a job. The more you write, the easier it will be to write and the better you will be at writing. I took that advice to heart and write every day. With two published books and counting, it's been amazing to have made this dream my reality.
I am a firm believer in marriage equality, love at first sight, power dynamics and happily ever after. I'm a lover of strong secondary characters and series filled with families, biological or chosen. All are themes you'll find throughout my books.
Website | Facebook | Twitter | Pinterest | Google+ | Ello | tsu | Goodreads | Tumbler