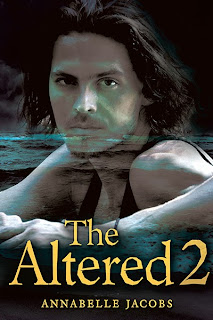 A remote farmhouse in Cornwall seems the perfect place for Ash to settle into his recently altered status. Starting a new life there with Sam—the shifter he can’t stay away from—should be easy this far from London where they faced so much danger. So why does adjusting seem impossible?Sam has issues of his own. He has to get used to his human form again after living the last eight years as a wolf. It’s hard when human worries weigh so heavily on his shoulders. Life is much more straightforward from a wolf’s perspective, until Ash needs his human support.Ash’s problem is simple: he’s fearful of shifting fully. How can he believe he won’t hurt Sam when his genes were altered to create a killer? Despite repeated reassurance, his anger and resentment increase. Only one thing is certain: if Ash can’t learn to trust himself soon, he’s in danger of proving himself right.

This is the sequel to what was a dystopic world created by Annabelle Jacobs. A world where one malicious act changes the lives and DNA of humans resulting to shapeshifters and something more. These 'altered' humans live a dangerous life of hiding from non-altereds who labelled them as not only sub-humans but dangerous creatures that are better off dead. Of course, the  government seemingly supports these altereds but that is just it: they only seem to.

When last we saw this world, Daniel and Jordan took themselves and their new pack to someplace safe where they could escape from those who seek to kill them. With them was Sam, the shifter who refused to change back into a human because of fear and Ash, Daniel's friend who is made altered. In this next installment, we find this new pack trying to live a normal life in an abnormal circumstance. Ash desperately tries to control his emerging wolf but is not very successful thus endangering the others' lives. Sam knows Ash is hi mate and tries to help out but fails because of fear.

Unlike the first book which set the world and pack, this one focuses mainly on Sam and Ash's budding relationship and struggle to live as an altered. Their struggles are painful to read and it made me wonder where it will all end. When it finally did, I was left with a whole lot of questions and very little answers. What did get settled was Ash and Sam finally face who they are and what they are. They both resolved to just live their lives.

As for how this all ends, well, we are left with a lot of questions but little to no answers, making me wonder and just want to find out more.

Posted by multitaskingmomma at 9:21 AM