eARC Review & Excerpt: The Butcher and the Beast by Sean Michael 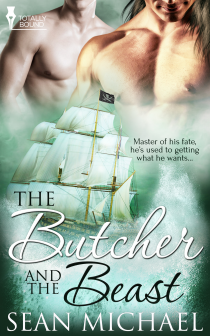 Stephen is a doctor, a practical man who wishes his sister wouldn't worry so about the pirates that plague their island home. So it's ironic that Stephen himself is set upon by just those pirates, who carry him off to heal their wounded captain.

John is a pirate Captain, master of his fate, and used to getting what he wants. And he decides he wants Stephen, even when the good doctor wants nothing more than to run away from him. Can the beast convince the doctor the sailors call the butcher to stay with him?

Publisher's Note: This book was previously published elsewhere. It has been revised and re-edited for release with Totally Bound.

Pure perversion, smutty, humorous and most of all so hot I could not put it down.

Stephen a doctor is kidnapped by pirates to tend the Captain wounds. Stephen is straight laced, bethroved and virtuous with his future laid out for him. John pirate Captain has his sights on Stephen and his crew kidnaps him onto his ship and well Stephen's plans for his furture goes overboard. Over the course of weeks in small increments John manages breaks down Stephen's barries to accept him and all of his perversed proclivities (Stephen's words not mine). The banter between John and Stephen is extremely entertaining. One has to wonder while reading and watching the relationship manifest if John was correct and Stephen needed guidance to find himself from his stringent enviroment.

I always love a good Pirate story and really hope to see these characters in the future.

By reading any further, you are stating that you are 18 years of age, or over. If you are under the age of 18, it is necessary to exit this site.
Copyright © Sean Michael 2015. All Rights Reserved, Total-E-Ntwined Limited, T/A Totally Bound Publishing.

“Elizabeth, please. I’m not going to Hades to fight the devil himself. I’m taking my constitutional. Simply wait tea until I return.” Stephen shook his head at his sister and her swollen eyes.
Ever since the damnable rumors about pirates attacking their fair isle, the woman had been an unbearable worrywart. The entire scenario was pointless, ridiculous—bloody childish. Admiral Lippincott was the finest in Her Majesty’s fleet, keeping them all safe and supplied. There wasn’t a pirate alive foolhardy enough to attack Santa Maria.
“Brother…Stephen. Please. Mary Ann said—”
“Mary Ann is a twit and a gossip—a child trapped in a woman’s body.” He stood, glaring down at her. “Now, honestly. Calm yourself and I shall be home before you know it.” He loved her dearly, he did, but damned if she didn’t drive him batty.
He stormed out of the drawing room, nodding to George as he passed. “Tea will be late.”
“Yes, Doctor Grey. Have a good walk.”
Yes, good man. This was why Stephen kept the old man on the payroll. He knew when to agree.
Stephen wandered down the cobblestones, nodding to the random people he met, heading to the long stretch of planks by the docks. His boots thumped against the wood. The sound of the water against the dock was quite relaxing.
There was a soft splash and two men appeared before him in the shadows. “You’re the doctor, eh?”
“I am.” Hell’s bells. He started backing away, gripping his cane firmly. He was ready for any trouble a pair of layabouts might try to visit on him.
“Good.” They each grabbed one of his arms and went over the side of the pier, landing in the water with a splash.
“Unhand me! Help! Constable!” Stephen struggled, trousers and shirtwaist soaked through and heavy immediately, the water cool and slick. Oh, Elizabeth was never going to let him forget this nonsense.
One of his captors turned to glide through the water on his back, tugging Stephen along, hand over his mouth. In moments he was being pulled up into a rowboat.
He still had his cane and as soon as he could find his balance and pull away from the fiends, he swung, hoping to make contact. “What wickedness is this?”
There was a yelp from in front of him and a laugh from behind him, and the cane was yanked from his hand and unceremoniously tossed overboard.
“We’re taking you to a patient, Doctor. This how you treat all of ’em?”
“I beg your pardon? The governor sent you?” Did they think him a fool?
They laughed. Not the polite titters he was used to, either, but full out belly laughs.
He looked around, judging the distance to the shore, the weight of his clothing. He was not the strongest swimmer on the isle, but he could survive. Stephen tensed, diving for the edge of the rowboat. His hopes were dashed as one meaty hand wrapped around his arm, holding fast.
“Now, now, sawbones, don’t be thinking of going anywhere before you see the cap’n.”
“Captain? Captain of what? Captain who? I know everyone on the isle.” His mind could not imagine it, could not come to terms with this insanity.
“Not taking you to anywhere on the isle, now are we?”
“Shut it, Dawson.”
“You shut it!”
“Both of you shut it,” came a third voice as they drew up next to a large ship.
“I am here under duress! I insist upon being taken back to shore!” Stephen despised ships, the rocking and rolling.
His words brought another loud round of laughing and he was unceremoniously hauled on board.
“Cap’n’s below.”
“Below? Below where? What is wrong with him? Why did you come fetch me? What on earth is that stench?”
“That’d be me, ya butcher.” A foul-breathed giant of a man pushed into his face, laughing before grabbing his arm and pulling him along.
“I say! Unhand me! What on Earth do you expect of me, without my bag, my tools?” Fiends. Foul, beastly fiends.
“We expect you to fix up the Captain, sawbones. He dies—you die.”
They started going down. The stench was…unbearable. People honestly lived this way? Apurpose? Utterly ridiculous!
“Stop hovering, Havers, and get me the thrice damned whiskey!” The angry growl came from the direction they were going in and a sailor pushed passed them like the very devil was on his tail.
Oh, facing the bear in his den. Goodness. What tales Stephen would have to tell tomorrow over breakfast. He held on to that thought.
He was brought into a little cabin with barely enough room to stand upright. The bed and desk took up most of the space, his escort using the bulk of the air in the small place. But it was the man on the bed who seemed to dominate the room.

Often referred to as "Space Cowboy" and "Gangsta of Love" while still striving for the moniker of "Maurice," Sean Michael spends his days surfing, smutting, organising his immense gourd collection and fantasizing about one day retiring on a small secluded island peopled entirely by horseshoe crabs. While collecting vast amounts of vintage gay pulp novels and mood rings, Sean whiles away the hours between dropping the f-bomb and pursuing the kama sutra by channelling the long lost spirit of John Wayne and singing along with the soundtrack to "Chicago".A long-time writer of complicated haiku, currently Sean is attempting to learn the advanced arts of plate spinning and soap carving sex toys.Barring any of that? He'll stick with writing his stories, thanks, and rubbing pretty bodies together to see if they spark.

Posted by multitaskingmomma at 9:13 PM