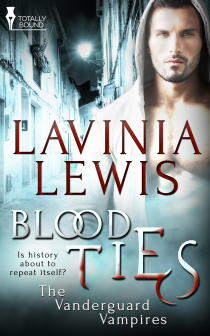 Vampire prince Thomas Vanderguard’s consort was killed by a soulless vampire drone over two hundred years ago. Now that Thomas has finally found love again, can he keep Daniel safe, or is history about to repeat itself?Vampire prince Thomas Vanderguard has been alone for over two hundred years—ever since the death blow that killed his companion, Jacob. For centuries, Drones have sought to eradicate his family’s royal lineage so that a rival family may seize the throne and gain control of their territory. But Thomas’ self-imposed solitude comes to an end when Daniel Alexander walks into his life. After several months of refusal, Thomas finally gives in to Daniel’s request to change him into a vampire, even though he fears Daniel will meet the same fate as Jacob.With a possible eternity of happiness stretching out in front of them, can Thomas keep his lover safe or is history about to repeat itself?Reader Advisory: This book is best read in sequence as part of a trilogy.Publisher's Note: This book was previously published elsewhere. It has been revised and re-edited for release with Totally Bound.

Review by: fadia
My Rating: 4 of 5 Stars

This is one of the best vampire books I have read in a while. It was not your usual coven where there is a "maker" but, an actual family with its quirks and insecurities. What captivated was the family dynamic between Thomas and the rest of their family and the way the author made their issues so real that you could often relate.

It is not easy to find love and to loose that person tragically. Thomas not only had to endure that; he also lived with the guilt of what could he have done different to save the man he loved. As with most things fate has a way of changing one's perception and this is where Daniel comes in. He is able to get past all of Thomas's defenses and allows him to open his heart again. That is until tragedy strikes that family again and close members of the family are killed by an ongoing war with an opposing family.

All in all, this is the great beginning to a new series that I look forward to read even though it ends in a cliffhanger.

By reading any further, you are stating that you are 18 years of age, or over. If you are under the age of 18, it is necessary to exit this site.
Copyright © Lavinia Lewis 2015. All Rights Reserved, Total-E-Ntwined Limited, T/A Totally Bound Publishing.

Lavinia discovered reading at an early age and could always be found with her nose in a book. She loved getting lost in a fantasy world even then. When her parents bought her a typewriter for Christmas at aged eleven, her fate was sealed. She spent hours dreaming up characters and creating stories. Not a lot has changed. Now when she is not writing you can find her enjoying a new release e-book.
Lavinia has lived all over the UK but currently resides in London, England. She has travelled extensively to places including Africa, Asia, Australia, America and most of Europe. Although some of her books are set in Texas she has never visited the state but plans to spend time there in the near future.
She is an avid reader and her favourite authors include J L Langley, Carol Lynne, Chris Owen and Andrew Grey. Lavinia particularly loves supernatural fiction and her favourite authors in this genre include Kelly Armstrong, Keri Arthur and Charlaine Harris.
Although Lavinia is a huge fan of the romance genre, she will admit to reading anything and everything. She loves horror, a good thriller and if a book has the capacity to make her cry, well, all the better. One thing she does insist on in a book however, regardless of genre is a happy ending, so you will always find one in the books she writes.

Posted by multitaskingmomma at 1:05 AM