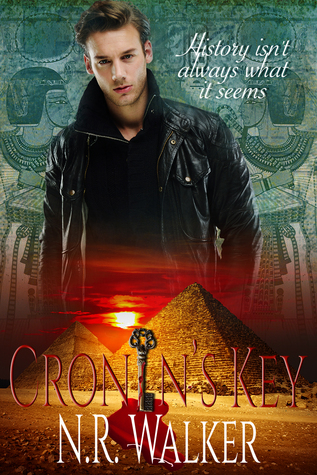 NYPD Detective Alec MacAidan has always been good with weird. After all, his life has been a string of the unexplainable. But when an injured man gives him cryptic clues, then turns to dust in front of him, Alec's view on weird is changed forever.
Cronin, a vampire Elder, has spent the last thousand years waiting for Alec. He'd been told his fated one would be a man wielding a shield, but he didn't expect him to be human, and he certainly didn't expect that shield to be a police badge.
Both men, strong-willed and stubborn, are still learning how to cope with the push and pull of being fated, when fate throws them another curveball.
Rumors have spread quickly of turmoil in Egypt. Covens are fleeing with news of a vampire who has a talent like no other, hell-bent on unleashing the wrath of Death.
Alec and Cronin are thrown into a world of weird Alec cannot imagine. What he learned in school of ancient pharaohs and Egyptian gods was far from the truth. Instead, he finds out firsthand that history isn't always what it seems.

Cronin's Key begins just like any other supernatural/vampire stories. With a murder that happens right in front of NYPD Det. Alec MacAidan. The man's last words was really a riddle but when he turns to ashes, that just plain boggled Alec's mind. Then, just when he thinks his world is getting stranger, in walks an irresistible man. In front of everyone in the police headquarters, Alec joins him and when they touch... poof! They disappear.  (Of course there were cameras and phones nearby so YouTube comes to the rescue)

Cronin has been around for more than a thousand years and is now an elder along with two best vamps Eijie and Jodis. Always the loner, his ability to leap through space and time is precious especially when in the midst of battle. When done in front of the police force and YouTube, it is a talent that could reveal the presence of vampires in the world. What he did was stupid, but he could not resist the need to claim his fated one: Alec.

(...and this is where the formula changes and what was expected to be a me, mine, claim, mate story turned into a history lesson with a twist. For cat lovers? You'd love this one. There is something about the presence of vampires and cats ~ from the domestic to the wild ~ so hint, hint... grab this one and find out.)

As Cronin and Alec begin to know one another as fated mates, the mysterious death witnessed at the opening salvo of this book just gets deeper, especially when the vamps hear of a rash of disappearances and deaths of both vampire and humans. There is something wicked afoot and Alec may be the key to the riddle.

This is not an ordinary book and I've read a whole lot of vampiric novels, even the ones that sparkle. This one, though, this hit a note. I am a history geek and reading the twists done to it by Ms Walker not only sparkled my interest, it made me nod in agreement. Its a whole lot of theories going on, but somehow, she made it work.

As for Alec and Cronin, their lives are not done after this book, and Cronin's Key II is now available. (Rest assured, this ends, this is not a cliffhanger, but you should pick up the second book for that is a whole lot of awesome!)